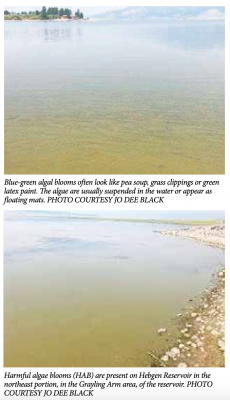 According to a July 27 press release from NorthWestern Energy harmful algae blooms have been identified on Hebgen Reservoir in the northeast portion, in the Grayling Arm area, of the reservoir. Routine monitoring of Hebgen has confirmed the presence of toxins, anatoxin-a and microcystin, that pose a risk to people, pets and livestock.

Madison County Sanitarian Van Puckett confirmed that the blue-green algae was also detected in late July at Harrison Lake, a reservoir of Willow Creek. Puckett’s team had the bloom tested for the presence of the toxic chemical it can emit. Results confirmed it was in fact blue-green algae, which can be confused with more common types of algae, but the bloom was not emitting cyanotoxin.

While gathering water samples Sanitarian in Training Zachary Kozicky noted visible signs of the harmful algae on the windward side of Harrison Lake, a presence that Puckett said is not unusual but it certainly worth avoiding. Kozicky posted warning signs for lake users who may not be familiar with the bloom.

While results came back negative for the harmful toxin the blue-green algae can omit it’s still advised that Harrison Lake recreators use caution. “It can still be harmful to people, and especially pets,” said Puckett.

While the toxin was not detected in the samples taken by Puckett’s office results are only reflective of when those samples are collected – the algae could still start producing those toxins after the sampling. “It’s not a safe assumption to say that just because the toxins aren’t present that they won’t be harmful in the near future,” said Puckett.

Blue-green algae blooms are not uncommon, but the Madison County Sanitarian’s Office has been receiving more reports of its existence as less residents and more visitors use Madison County’s reservoirs. Newcomers who are not familiar with the usual areas the blue-green algae appear are at the most risk.

“It does concentrate in just a few areas, at the northern end of places like Ennis Lake and Harrison Lake,” said Puckett. “So, it’s pretty typical that you’ll find it there, and should know to stay away from that area.”

Puckett said he hasn’t received any reports of the bloom on Ennis Lake yet but urges caution on windward areas where the bloom can form.

According to the Montana Department of Health and Human Services, in addition to blooms confirmed on Harrison and Hebgen lakes, HABs have been identified in portions of Hyalite Reservoir, Hauser Reservoir, Holter Lake and Placid Lake.

Ingestion or prolonged contact with the algal bloom may result in illness, with signs such as muscle twitching, staggering, convulsions, paralysis and death. Importantly, children and pets are more likely to ingest HAB infested waters because they spend most of their time wading in the shallow waters where algae can accumulate, and they have less control over how much water they ingest. Animals and livestock that drink large amounts of contaminated water, and pets that collect scum on their fur and then ingest it by licking, are at high risk of toxin exposure. Toxin exposure can occur in humans from recreational activities where water might be ingested such as swimming, wind surfing, jet skiing, and water skiing.

Health experts recommend people not swim or take part in activities likely to result in exposure to the toxin in areas where the algal bloom is present. Additionally, pets and livestock should be prevented from entering the water in that area.

HABs are caused by bluegreen algae that are native to Montana’s freshwater lakes and reservoirs. Not all varieties of blue-green algae are harmful, but some can produce dangerous cyanotoxins. Blue-green algal blooms often look like pea soup, grass clippings or green latex paint. The algae are usually suspended in the water or appear as floating mats.