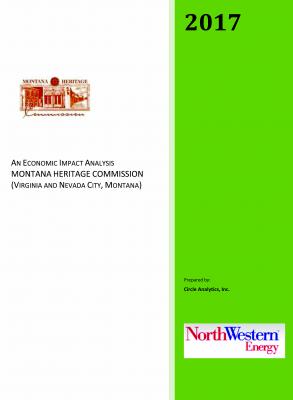 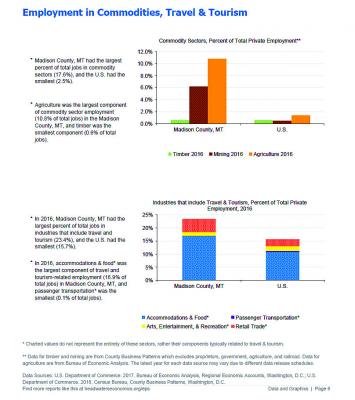 VIRGINIA CITY – The Montana Heritage Commission (MHC) recently released a report that tallied the economic impacts it and the visitors attracted to its four historic properties, two local, produced during 2017.

The numbers are pretty incredible.

From a total impact of $74.6 million – created from auto, food, fuel, lodging and retail spending; along with $11.9 million in historic improvements and the 2017 $1.3 million MHC operating budget – Madison County received a total of $45.3 million in “value” from tourism, according to the study.

Rob Gilmore, of Circle Analytics – he is also economic development director for Gallatin and Park counties – prepared the MHC report.

Gilmore explained how the MHC numbers were generated.

According to MHC tallies, some 450,000-500,000 people visited Virginia City and Nevada City during the course of 2017. Their average visit was more than 15 minutes, Gilmore noted.

Using information from the University of Montana’s Institute for Tourism & Recreation Research (ITRR), MHC’s figures were then used to compute how much money visitors spent during these visits.

With this dollar figure in hand, several “impacts” – essentially money being spent – were generated. These impacts include direct, indirect and induced impacts, which put multipliers on each dollar spent.

Gilmore said the multiplier method of analysis uses an “input-output model” as well as “social accounting” to estimate how each dollar spent is multiplied out.

Say a tourist buys an ice cream cone at the Virginia City Creamery.

Selling this ice cream cone requires the shop owners to purchase milk, cream, sugar and flavorings to go into the ice cream, a cone to hold it, an ice cream freezer to hold the product, a cash register to ring up sales, cleaners to keep the shop tidy, an accountant to handle bookkeeping, and a slew of other goods and services related to serving that customer an ice cream cone.

The vendors supplying the creamery are also buying goods and services to sell their products. This cycle continues, generating economic activity all the way along this path.

There are also negative impacts – what if the company goes bankrupt and must lay off workers? This has a far-reaching effect on economies, as everyone saw in 2008’s recession.

Gilmore said Circle Analytics built a software program to consider all of these quirks and impacts, and this computer model spit out the numbers in the MHC report.

So, if MHC is generating nearly $75 million worth of economic activity for Madison County, how does this compare to other economic activities in the county – agriculture in particular, which the county is proud to proclaim as its leading industry?

To put MHC’s contribution to the local economy into perspective, consider the following:

According to the U.S. Census Bureau’s 2012 Economic Census statistics for Madison County  (this six-year-old data represents the latest economic figures available after checking into several sources, including state agencies; also, it is not influenced by Gilmore’s multipliers, these are direct numbers) MHC’s economic contribution to the overall county’s economics appears quite sizeable.

According to the 2012 figures, more than $117 million was generated by various overall industries within the county.

By the numbers, here’s how they rank:

• Retail trade, with 725 employees, resulted in the largest amount of economic activity: $59 million, in 2012.

• Healthcare, in several categories combined, with 282 employees, came in second, at almost $24 million.

• Accommodations and food, with 220 employees, were the third largest producers, at nearly $16 million.

• Administrative support, waste collection and remediation (how they grouped these together is a mystery), with 94 employees, generated $4.7 million.

Mining’s economic impact in Madison County is not revealed in the Census surveys to keep proprietary information about the companies who do it hush-hush.

Another figure to consider is this one: According to Barb Wagner of the state’s Department of Labor, total personal income for Madison County residents in 2016, was $386.2 million. Personal income, Wagner pointed out, is not a direct comparison to the “economic activity” generated by input models, but it is the most closely related concept available at the local level.

Ken Fichtler, Chief Business Development Officer in Governor Steve Bullock’s Office of Economic Development also pointed to the personal income figure of $386.2 million in Madison County. He also noted that median household income was $47,617, a bit lower than median state income at $48,380, and a big drop from the same U.S. household median income of $55,322.

If MHC tourism is generating some $74 million per year, and if  $45 million that stays in the county, how do these figures jive with what everyone “knows” about Madison County, that agriculture is its biggest industry?

Emilie Ritter Saunders, Communications Director for the Montana Department of Commerce, is in charge of communicating all things tourism with the state.

Saunders said the Department of Commerce can’t verify the data in the MHC report.

“Circle Analytics (Gilmore’s company) prepared the report,” she said. “It’s his report, his data, we can’t verify it.”

Gilmore says the multiplier whammies that were applied to MHC’s raw tourism spending numbers have not been applied to U.S. Census report numbers, so the numbers are not comparing apples to apples.

“Ag is the biggest commodity industry in Madison County,” Gilmore said, “but it’s not the county’s biggest industry, counting tourism.”

By comparison, travel and tourism represented 23 percent of all jobs in the county – some of what generated that $386 million in personal income in Madison County.

Under the travel and tourism classification, accommodations and food was the largest element, accounting for almost 17 percent of all county jobs; retail tourism followed; then arts and entertainment; then transportation for tourists.

Even with these numbers, Gilmore said that agriculture may have a potentially bigger impact overall on the county than tourism, with multipliers of 80 – 90 percent influencing it, when the economics it generates get analyzed and spread out among satellite industries.

But we’ll all have to wait until such an analysis is done on this to find out if that is so.