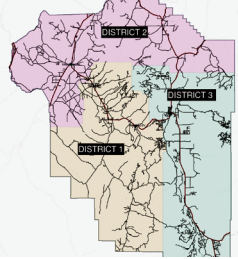 At their Aug. 10 meeting Madison County Board of Commissioners voted 2-1 in favor of a resolution stating that road funds for the three road districts will be allocated equally per district according to the number of road miles in each district, after leaving the necessary funds in general road and adequate reserves in the overall road fund.

The resolution also states that road district funds shall be expended quarterly with no more than 25% of the annual budget spent in each quarter, which can be amended by the commissioners if necessary.

Commissioners Nye and Dan Allhands were in favor of the resolution while Commissioner Jim Hart voted against the funding update.

“Before we passed the resolution there was no methodology as to how to distribute the funds between the three road districts,” said Commissioner Nye. “We’re trying to come up with a method where everybody gets the same amount of money per mile of road to their district.”

At the end of August meeting Commissioner Allhands addressed social media posts related to the budgeting shift, which he labeled as “misinformation about the possible cuts,” related to concerns regarding snowplowing on the county portion of Jack Creek Road as well as Big Sky and Moonlight Basin, which Allhands explained funding for these areas does not come out of District 3’s road budget.

“By no means is anyone going to be stranded in a blizzard, because we can’t get to them,” said Allhands, referring to other concerns he’s received related to the budget change affecting snow removal in areas like Shining Mountains in District 3.

Commissioner Hart, who did not see any social media posts regarding the decision, reiterated his stance on the budget shift.

“I think it’s short-sighted to base each of our road district budgets on only one item, and that being miles,” said Hart, recalling decisions made by past commissioners that split the road funding by percentage, “We’ve followed that since I’ve been a commissioner… I’ve said my plan on what it that I hope to do, where we were, where we sit, and where I hoped to be, and you guys disagreed, and that’s why we have a commission of three.

” The county’s final budget hearing and mill levy requirement decision is scheduled for Sep. 14 at 11 a.m. It will be held in person in the second floor room of the Madison County Administrative Office Building as well as virtually via Webex.