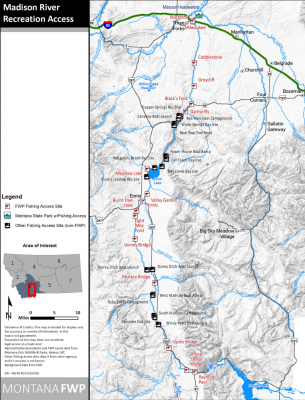 The Fish and Wildlife Commission unanimously voted to adopt the Madison River Recreation Rules as recommended by Fish Wildlife & Parks (FWP) and approved amendments to recommended rules including a cap on outfitter numbers and the rest/ rotation and walk/wade schedules on Nov. 18.

After much discussion, regulating the Madison River entered the rulemaking process virtually on Oct. 20 for the first time in decades. Two petitions were presented for public comment by George Grant Trout Unlimited (GGTU) and other sportsmen’s associations and the Fishing Outfitters Association of Montana (FOAM) along with an environmental assessment done by FWP.

Three goals were to be maintained by the petitions and any forthcoming rulemaking: maintaining long-term fishery health; reducing angling conflict and promoting diversity of angling opportunities; and sustaining economic and ecological benefits of the Madison River for residents and guests.

“By and large meeting the goal is still the goal and that’s to take care of the river because the river will take care of us if we do so,” Commissioner Pat Byorth representing District 2 said at the beginning of the over six-hour long meeting last Wednesday.

Don Skaar, habitat access bureau chief with FWP, summarized public comments from Oct. 20. Out of the 863 comments received, Ennis, Bozeman and West Yellowstone had the highest response rate in terms of location. Out of the three, Ennis had the largest number of comments at 17%. Thirty-three different states were represented and 35 Montana communities.

A Commercial Use Work Group under the authority of the Region 3 Recreation Manager was originally proposed by FOAM. FWP’s recommendation broadens the scope of the working group to include all river users. The working group will be appointed by and under the authority of the commission. Its purpose is to evaluate all recreational use of the Madison River and report findings to the commission.

Both FOAM and GGTU proposed the creation of a Madison River Use Stamp in their petitions that would be provided at no cost to all river users with annual reporting requirements. The use stamp’s intent was to gather more information on noncommercial river users. FWP’s recommendation requires all river users to report information on their trips. Sign in boxes, like those used for block management, in-person interviews and cameras were considered to meet these ends.

The two pilot programs will be evaluated by the working group and FWP after the first year and all other rules on recreation use evaluated every five years.

“The reason for delayed implementation was to give the allocation system one year of implementation and review in addition to two years of data gathering from the required reporting. The work group would be charged with using the data to predict effectiveness of both programs prior to implementation and to recommend changes to the commission if warranted,” Eileen Ryce, fisheries division administration for FWP, said.

The commission amended the outfitter cap, rule one, to include *2019 and estimated 2020 numbers, resulting in a maximum of 14,500 trips. This was in an effort to accommodate those who may have started a business in 2020, or who may have seen lower trip numbers in 2019, but are expecting growth in 2020, Commissioner Byorth explained after the meeting. He mentioned the maximum number is rarely met, typically only reaching about 70%. This will be implemented in 2022.

Between June 15-Sept. 30, fishing outfitters and guides will be prohibited from conducting business on Saturdays from Raynolds FAS-Lyons FAS—amended from FWP’s recommendations—and on Sundays from Lyons FAS-Palisades Day Use Area. These amendments will be implemented in 2023.

The portion in new rule three that does not allow fishing from a boat from Ennis Reservoir to Ennis FAS remains the same. On Saturdays and Sundays from June 15-Sept. 30, fishing from a boat will be allowed from Raynolds FAS to Lyons FAS. The remainder of the week is closed to fishing from a boat in this stretch. These would be changes to current regulations as well as FWP’s recommendations and will be implemented in 2023.

“It is not meant to be set in stone, but it gives us something to measure,” Commissioner Byorth said.

The commission also amended a portion of the working group rule, rule 14, to add a commission member and representative from the Bureau of Land Management (BLM) to the group. The working group would not have to make decisions based on consensus.

“I’m not happy with everything but that’s kind of the nature of this project and the nature of doing this,” Scott Vollmer, Montana Outfitters & Guides Association (MOGA) director at large, said. “But all told I think this is workable.”

Most individuals who commented after the commissioner’s amendments were grateful for the amount of deliberation and time spend going through the regulations. Furthermore, most felt they could live with the proposal.

“That was one of the better discussions I’ve seen in the commission in recent meetings,” Michael Bias, E.D. of FOAM, said.

He accepted the proposed setback dates of 2022 and 2023 for the cap, rest/rotation and walk/wade restrictions.

Steve Luebeck, member of the board of directors of GGTU, voiced concerns about delayed implementation. “I’d point out that you already have baseline data on this,” he said, speaking to FWP. “You guys had cameras on bridges in 2018 in the Lyons Bridge section, which is one of these areas we’re talking about for rest/ rotation. There’s no better baseline than what you guys already have.”

Several commenters stressed other points they felt were crucial.

“Unfortunately, this proposal is going to do a significant amount of harm to one of Montana’s most outstanding fishing resources, that walk/wade section,” Hugh Zachiem, Helena resident who worked on the Three Dollar Bridge Riparian Restoration Project, said. “If you want to do a test in 2021, do a test. Put the rest/rotation in as you proposed just don’t compromise the walk/wade section.”

Jonathan Malovich, E.D. of the Madison River Foundation, advocated for implementing the working group prior to the end of the year.

“I think this is vital and that would be my recommendation is that the commission move to establish this working group and appoint the participants in that group within this calendar year,” he said. “Doing so would ensure the success of that working group along with the establishment of a recreational carrying capacity and future rules for the success of the fishery, the resource and Montana.”

Two filing dates in December are available for the commission to post the final rule on the Montana Administrative Registry—Dec. 1 and Dec. 15. If rules are filed by Dec. 15, they will go into effect Dec. 25.

The work group would not be passed in rule format until it is filed with the Secretary of State, Rebecca Dockter, legal counsel for FWP, explained. Once filed, rules are effective ten days after.

“If, however, there is any way for the department to get it done before Dec. 1 with the rule filing, I think this commission would look at entertaining some applications knowing we can’t appoint that body until later,” Commission Chair Shane Colton said at the end of the meeting. “It’s not in an effort to prohibit the next commission from doing anything or stealing an action from them, it has to do with our familiarity with this issue.”

An economic impact study was determined not necessary until the allocation system is developed, Dockter explained.

FOAM’s petition included measures for transferring guided trips between Special Recreation Permit (SRP) holders. Current Montana statute only allows trips to be transferred when an entire business is sold. Transferability will not need to be addressed until the cap is set in 2022.

*Outfitters are able to choose either 2019 or 2020 levels, whichever was higher for the outfitter. The 14,500 number is an FWP estimate of what the highest cap may be.