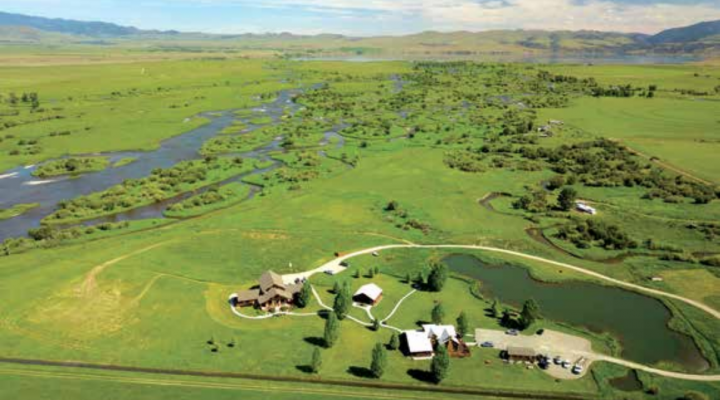 Regulating the Madison River entered the rulemaking process on Tuesday, Oct. 20 for the first time in decades with a virtual public comment hearing.

Regulations intending to reduce crowding and preserve fishery health began as far back as 1959 with a closure from Hebgen Dam to Varney Bridge. In 2012, a scoping process began and the Madison River Citizen Advisory Committee (MCAC) was created. MCAC’s goal was to offer recommendations to the Fish and Wildlife Commission in 2013, but the process was halted due to funding concerns in 2014. Part of the recommendations would have included a use stamp, a threshold for angler use, banning boats from wade sections and limiting development downstream of the Greycliff Fishing Access Site (FAS).

Through 2016 and 2017, more scoping was conducted and an Environmental Assessment (EA) and rules were sent to the Commission, which ultimately decided not to share the findings with the public. The Commission directed Montana Fish Wildlife & Parks (FWP) to form a Negotiated Rulemaking Committee (NRC) tasked with hearing all perspectives involved in the river regulations and with getting new rules into angler books by 2020.

During this second scoping process, FWP conducted a creel survey to gain more insight on river users’ values. From 2015-2017, the survey found that increased fishing pressure and nonresident fishers, angler dissatisfaction with the number of anglers on the river and crowded FASs as issues on the upper Madison. The NRC, which must reach a consensus by state law, went through the creel survey and came up with recommendations to address issues found. It ultimately failed and dissolved in Aug. 2019.

At the end of 2019, FWP sought public comment again via a survey addressing outfitter and angler management and social conflict on the river. Around 7,500 responses were collected, and results showed that a healthy fishery, a viable economy and diverse angling opportunities were important to those who participated.

The two petitions and the new EA were presented for public comment last Tuesday.

Approximately 50 people streamed the meeting via YouTube while others used Zoom. Don Skaar, habitat access bureau chief with FWP, went through the EA and both petitions.

“Our intent tonight is to help the public make the best-informed comments as possible and we welcome questions for clarification after our presentation,” Eileen Ryce, fisheries administration with FWP, said. Commenters were given three minutes for statements. All spoken and written comments will be considered by the Commission for final rulemaking.

Three goals identified by FWP were to be met by the petitions: maintaining long-term fishery health, reducing angling conflict and promoting diversity of angling opportunities and sustaining economic and ecological benefits of the Madison River for residents and guests. A status quo option was also addressed. Current regulations prohibit boat fishing from Quake Lake to Lyons Bridge FAS and Ennis FAS to Ennis Lake.

FOAM has a history on MCAC and the NRC and represents over 75% of Madison River Special Recreation Permit (SRP) holders. “It is crystal clear to FOAM that the majority of commercial users are long past ready for a plan to be implemented,” their petition stated.

In an effort to reduce crowding by managing commercial use, the FOAM petition would assign guided trips to SRP holders with a valid permit prior to June 15 equal to their historic use during the 2019 or 2020 season. Flex Trips would allow for up to ten additional trips two out of three years. FOAM’s petition also allows for the transfer of guided trips and a tier system to help monitor trips over time. FWP findings show angler days on the upper Madison doubled from 88,000 to 249,000 from 2012-2019.

Fishing from boats would be allowed four days per week— Sunday-Wednesday—in the upper walk/wade section from Raynolds FAS to Lyons Bridge FAS each year. Ennis Bridge to Ennis Lake would remain under status quo regulations.

FOAM also proposed a Commission Working Group which would be in charge of the monitoring and enforcement of new rules.

The GGTU/ASA/SSA petition cited public support for recreation rules from FWP’s 2019 survey. This petition capped outfitters at 2019 levels. Two rest/rotation periods would be implemented to separate commercial and noncommercial users between June 15-Sept. 30.

A walk/wade designation during the same season would be required Friday through Sunday from Quake Lake to Lyons Bridges FAS and from Ennis FAS to Ennis Reservoir. Boats would not be allowed to access these areas over the weekend. Boat access would be allowed Monday through Thursday, but fishing from a boat would be prohibited.

Development downstream from Greycliff FAS would be limited to maintain a primitive setting and FASs would be redesigned and staffed to reduce congestion.

Both petitions recommended a No-Cost, No-Limit Madison River Use Stamp for all river users. Recreationalists would report use on an annual basis, creating a database of noncommercial use to help consider limits for this demographic.

The rest/rotation schedule, walk/wade sections, definition of conflict and future of young outfitters dominated the public comment portion of the meeting.

Those not in favor of the rest/ rotation periods pointed out that closing one section of the river would increase crowding in others.

“The river is not long enough for rest and rotation of these very long sections because the length of the sections causes a huge overcrowding of a bigger section,” Nancy Delekta, owner of Beartooth Flyfishing, said. A handful of individuals called in in support of the rest/rotation schedule.

Denying access to particular areas of the river by boat in walk/wade sections would benefit commercial users more than residents, Mike Cagle, 36-year Madison River wade fisher, said. It would also make portions of the river difficult to fish depending on the user’s fitness and ability, Rich Gockel, Ennis resident, pointed out. Justin Edge, owner of Edge Outfitting in Ennis, said a 75- acre portion of land may end up being privatized if boats are not allowed in the walk/wade section because access would be impossible by foot without trespassing on private land. River users must stay below the high-water mark.

Some expressed that they did not see the type of conflict FWP refers to in their experience on the river. Craig Eggers, an Ennis resident, felt that if crowding is the major issue to be resolved, then the GGTU/ASA/SSA petition ‘feels like a red herring.’ Eggers also does not see how the sportsmen’s proposal benefits walk/waders.

Edge and Ashley Denruyter, whose husband recently began an outfitting business in Ennis, expressed concerns of a 2019 cap on outfitter numbers. Denruyter observed the possibility that if this component became rule, the couple may have to relocate. Edge viewed commercial use as the target for 100% of the regulations and felt there was no indication the general public would ever be restricted.

In August, one commissioner, Richard Stuker, voted against entering the rulemaking process since a carrying capacity of the river had not been defined. John Malvovick with the Madison River Foundation echoed this sentiment.

Gentry created a petition after the hearing opposing commercial management on the river and supported defining a carrying capacity. As of Tuesday morning, 188 individuals signed in support.

“With the pending election and possible change in administration, the FWP Commission seems to be fast-tracking the comment period and clearly wants to act before a new Commission gets appointed,” Gentry said in the petition’s introduction.

Moving forward, written comments must be submitted no later than Oct. 30 and suggestions from the written comments and the hearing may be adopted, rejected or modified at another public meeting by the Commission.

The Commission is scheduled to make a final decision on Nov. 18.

The EA, FOAM and GGTU/ ASA/SSA petitions, and rule proposal may be found on Montana FWP’s website.

FWP produced a list of rules based on both petitions. FWP acknowledged the rules may conflict, which members of the public were able to comment on during the hearing. Rules I-IV and XVI are based on the GGTU/ASA/SSA petition and VI-XVI on FOAM petition. The rules are as follow:

II. Commercial plan, GGTU/ ASA/SSA style—rest/rotation: No commercial use June 15- Sept. 30 from Lyons Bridges FAS-Palisades Day Use Area on Sundays and from Varney Bridge FAS-Ennis FAS on Saturdays. During the hearing, Steve Luebeck, director on the GGTU board, explained the rest/rotation period would not preclude shuttle services.

IV. Development below Greycliff FAS will be limited—vessel or float tube access to carry-in only. (GGTU/ASA/SSA)

VI. Commercial management plan, FOAM style: A SRP holder will be allocated guided trips to operate each season equal to their highest historic use in either the 2019 or 2020 season. Those who experienced reductions in normal use may petition to use previous historic use for assigned trip numbers. Up to ten additional Flex Trips may be used two out of three years. If use is zero, the SRP holder will not receive historic use allocation or flex trips to operate. Unused guided trips will make up a distribution pool that SRP holders may benefit from. If total trips exceed use allowance, the SRP holder may be subject to disciplinary action and/or loss of permit. No rest/rotation schedule will be endorsed or considered until after a threeyear evaluation.

VII. SRP holders may hold a maximum of two permits. New permits will receive ten Flex Trips to build use, unless use is transferred from a current SRP which will then be defined by the historic use of that SRP. No outfitter can operate more than 10% of total use for all commercial users. The FOAM petition was passed to get to the public comment portion of the process, understanding the language did not say whether trips could be transferred for pay. Currently, this is not allowed and would have to be considered in the 2021 legislative session.

VIII. SRP holders receive ten Flex Trips to use annually. These are temporary, may be adjusted, are non-transferrable and outfitters must report use just as they would standard trips at the end of the year. They can only be used two out of three consecutive years. (FOAM)

IX. Only SRP holders may transfer or receive guided trips. Trips may be transferred to other SRP holders by outfitter discretion as long as FWP is notified and a transfer request form is completed. (FOAM)

XI. SRP holders will apply annually to renew their permit. Application fees will be $110/ SRP.

XIII. The Madison River Recreation Management Plan will be quantitatively evaluated after the first year and again every three years by FWP. The reports will evaluate river use from SRP holders, satisfaction of SRP holders and effectiveness of allowing fishing from a boat or vessel four days per week.

XIV. The FOAM petition establishes a Commercial Use Working Group under the authority of the Region 3 River Recreation Manager. This group would establish a process for conflicts and complaints, may award guided trips to outfitters from the distribution pool, review total use, adjust trip allocations as needed, review additional guided trips added to the distribution pool, review annual number of Flex Trips and may assign a fix number of new permits issued.

XV. FOAM proposed a trip distribution pool to allow businesses the opportunity to expand without exceeding the cap on commercial use trips. If total SRP trips are zero for three consecutive years, the permit is forfeited, and trips will be placed into the pool. Current SRP holders that have operated at least 95% of their guided trips during the past season may apply to receive trips from the pool via lottery. Additional trips will be part of an outfitter’s total guided trips and may be forfeited if use and guided trips are reduced.

XVI. A No-Cost, No-Limit Madison River Use Stamp was proposed by both petitions. This stamp would allow for data collection on all users of the Madison River. Increasing use levels may necessitate a cap or limit on other types of use in the future. Stamp holders would report use each year