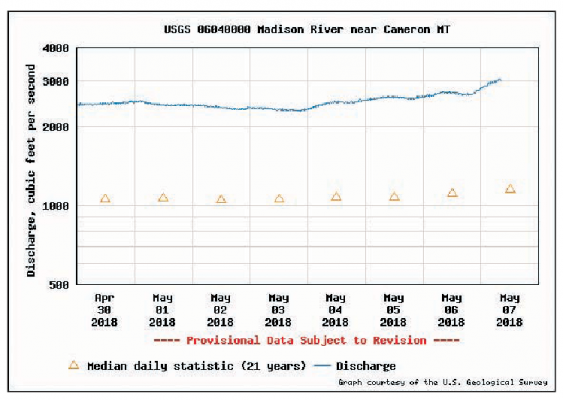 Is there such a thing as too much water?

After a dry 2017, spring and summer could see flooding

ENNIS - According to the U.S. Department of Agriculture’s Natural Resources Conservation Service (NRCS), water is going to be a problem across Montana, especially western Montana, during the next several months.

NRCS believes the record to well-above normal snowpack in the mountains is primed to melt, and that this, coupled with record April rains — snow in the higher elevations – is going to bring flooding and an extended runoff season, not May flowers.

According to Lucas Zukiewicz, NRCS water supply specialist for Montana, 99 percent of the moisture accumulated from winter snows and more recent rain on the mountains is still locked up either snow or in the soil. And this, with record April precipitation is going to spell trouble this summer.

This winter’s snowpack was record-setting, Zukiewicz noted, especially in the Upper Clark Fork, Blackfoot and Clark’s Fork (Yellowstone) River basins. The amount of water held in the snow that fell in these basins exceeded previous records, including the snowpack of 1975, 1997 and 2011. These records remained viable even through early May as the snow began to melt at lower and middle elevations.

“Snowpack percentages are incredibly high for this date across the state, and in almost all river basins,” Zukiewicz said. “At some point in the spring I stopped getting excited by the continued snowfall, and started worrying about it.”

Meanwhile, April, he said, began like other snow season months this year: The first 18 days had average to well-above average precipitation in the form of both snow and rain.

The snow continued to build the mountain snowpack at higher elevations.

NRCS measures snow data from sensors in the ground that measure the displacement of snow, then convert this into inches of water. Zukiewicz said inches of water are used as a measurement because when snow falls, it settles and changes character. (Think of six inches of fresh overnight snow becoming two inches of melting snow in the afternoon sunshine.) However, the amount of water in snow is constant, and this is a more reliable measure the amount of moisture snow can bring.

Record April rainfall was noted in both the Madison and Gallatin valleys, Zukiewicz said.

The last half of April was dominated by sunshine, high pressure and well-above average temperatures, Zukiewicz said. This sparked some release of the snowpack, but only 1 percent of it, according to NRCS.

NRCS forecasts long-duration streamflows for water users across the state, and the May 1 – July 31 forecasts reflect well-above normal and well-above average snowpack in almost all state river basins.

“In many cases, the large increases in flows were from elevations below what we measure with our current monitoring network,” Zukiewicz said. Snow in valleys was also “abundant” due to the below normal temperatures.

When it and the low elevation mountain snowpack started to melt, it resulted in quick increases in flows in many rivers and streams – think Virginia City’s April flooding. Also, two other local barometers of how much water was coming down the river included how the pumphouses at the Ennis dam and Norris set new records for April: Norris was 228 percent above average, at 4.25 inches, Zukiewicz said; Ennis was .2 inches, 155 percent above average. Both figures are well above average, he said.

As a result of all this water, Zukiewicz said, there is significant potential for flooding along some rivers and streams this spring and summer, according to official National Weather Service flood potential forecasts. This is likely across the state, and in some places it is already occurring – despite the fact that the bulk of the snow water remains up on the mountains, trapped in snow itself or mountain soils.

On Friday, May 11, for example, flood warnings were issued for the Jefferson River, near Three Forks; and the Big Hole River, near Melrose. The Smith River (in Cascade County), the Sun River near Simms, and Deep Creek (in Broadwater County) were also under flood warnings.

“Mountain hydrology is complex,” Zukiewicz said, “It (water) doesn’t all come down at once; it goes into the soils, into the ground. Ultimately, we’ll have to wait and see how fast the snowpack comes out this year, but the potential is there for big flows to occur with the amount of snow still left in the mountains. A long period of sunny days with above average temperatures, or a rain-on-snow event would be a game changer. A close eye should be kept on the weather forecasts this spring and summer, especially if you live in a low-lying area near a river or stream.”

Perhaps the biggest impact, statewide, has been the Governor Steve Bullock’s declaration of a flooding emergency on May 2. The executive order allows the governor to mobilize state resources and the Montana National Guard to protect life, health, and property and to expend funds determined by the Office of Budget and Program Planning to meet contingencies and address needs that may arise from the emergency.

Zukiewicz said that water management on rivers with reservoirs has been effective so far, with the reservoirs in some basins being dropped to near historic levels before runoff gets heavy. The Bureau of Reclamation dropped Hungry Horse Reservoir in the Flathead River basin nearly 70 feet, and in the Sun River basin Gibson Reservoir was dropped to close to record low on April 1.

Still, those along non-controlled streams and rivers will be “at the mercy of the weather this year with regards to snowmelt runoff.”

Our area averages about 12 – 18 inches of precipitation annually, Zukiewicz said. This figure is separate from snowpack runoff water, which is about 30 inches annually, thanks to that odd mountain hydrology, and is what drives irrigation and other water uses.

Zukiewicz expected to see about the same amount of snowpack water this year, despite the fact that the Black Bear snowpack measuring station near West Yellowstone, on the Madison River headwaters, recorded 48 inches (4 feet!) of snowpack water headed downstream.

“A good snow pack is good for us,” said Sheridan rancher Neil Barnosky. “It means plenty of irrigation water and it’s easy to keep stream flows. It’s a real benefit to us. The grass is a little late getting started this year, but I think it will take off. We could have some flooding in the lower fields, but this is generally a reduced impact.”

“We run cows up in the mountains in the summer and it’s hard to tell how the rain will pan out (long term),” Barnosky said. “Summer rains determine how things will go up there.”

After a dry year last year, is the moisture a recovery of sorts?

With the rivers up, you’d think fishermen – especially the fly fishermen who drive a large part of the area’s summer tourism trade – might be a bit put off. Fishing with most artificial lures, including trout flies, is largely a visual sport: Trout have to see the fly or lure to think its food and hit it. (Bait anglers have an edge in high, discolored waters because trout can scent bait as well as see it.)

Not so, says Joe Dilschneider, owner of Troutstalkers and the Madison River Fishing Company, in Ennis.

“This (high water) is just a part of life,” he said. “It happens every year, doesn’t affect our business much.”

“Rain is not an impact,” he said. “The Madison Valley is a stable watershed. When it rains and there is a lot of sediment in the water, it can be difficult fishing. But the Madison is not like the Yellowstone, the Smith and the Big Hole rivers. These can blow out when there is a lot of rain and heavy run off. They get super muddy. It has to do with the makeup of the stream bed and the watershed. Snow and runoff is different.”

“Many people think if the river is high and off color, it is unfishable, and you can’t catch fish,” he said. “Nothing could be further from the truth.”

“When all things are perfect and it seems like the ideal conditions, you can still get skunked,” he continued. “There is no such thing as a perfect day.”

“It’s quiet now but that’s not because you can’t get great fishing. Look at the water, if it is any shade of green, fishing can be good, fish can be caught. If it’s brown, chocolate like over in the Gallatin, you don’t want to fish.”

“We’re still fishing…” Dilschneider said. “When it gets brown we take clients 40 to 70 miles upstream or down to find that green water. There are good conditions on the Madison River upstream and down. Trout are stuck between the banks and they’re in the business of having to eat, they’re eating bugs.”

Anglers need to change tactics to adapt to water conditions, he said. If the water is off, the mountain lakes are fishable.

“Dirty water is just one more obstacle to overcome. You gotta fish on through it.”