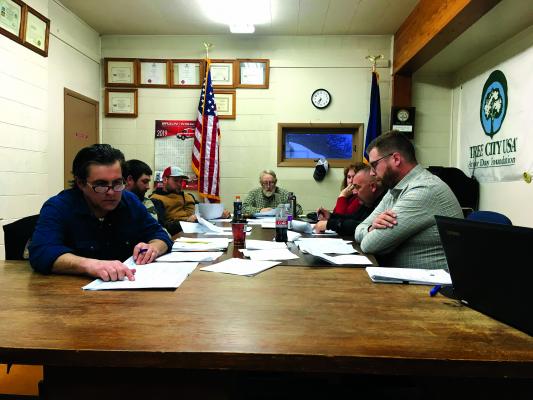 Concerned Citizens survey heard, Resort Tax could pay for it all

The council heard from the Concerned Citizens group whose final survey results claimed they didn’t want to project, and a council member came up with a unique resort tax plan to potentially eliminate the $155 per year per parcel assessment that would fall on property owners as a result of the project.

Councilman Joe Willauer pitched the Resort Tax plan—but not before lauding the public participation at the April 9 meeting, saying he’d never seen a council meeting packed like that one was. About 25 residents attended the meeting.

Willauer’s basic idea was this: Get Twin Bridges approved as a resort town by the state, then use the 3 percent minimum resort tax on “luxury items,” which includes guided outfitting days, restaurants, and lodging – but not things like groceries or medical expenses – to pay for the assessed bond for the sidewalk and curb project, as well as other development projects going into the future.

State rules about resort taxes, according to information from Willauer, say that at least 5 percent of the resort tax revenues must offset municipal property taxes.

Willauer expected that if the resort tax would become implemented, it would raise about $1.5 million annually. This would cover the cost of the town’s sidewalk and curb bond, $45,000 annually; and, Willauer estimated, could eliminate the need for a special improvement district (SID) tax for the stormwater project. Residents, he noted, would have to spend more than $5,000 annuallly on lodging, outfitting or restaurant food to spend more on tax than the current SID, an unlikely situation, he said.

Willauer outlined three steps that would need to be taken to implement a resort tax.

• Have Mayor Tom  Hyndman send a letter to the state’s Department of Commerce to ask if Twin Bridges would qualify as a resort town.

• If the town qualified, council would have to pass a resolution of support to become a resort town.

• The community would need to vote on this and approve a resort town status.

Residents asked about the limit of the resort status, and how this might affect local businesses.

Willauer said it would only apply to city limits, if approved; and that it was essentially a sales tax on tourism dollars.

Only one resident, Leslie Adams, expressed concerns about the idea. She said she didn’t think people coming to her facilities would like paying extra, or that the town’s SID levy was appropriate in general.

Hyndman said the resort tax would only affect capital improvement projects, like the stormwater, curb and sidewalk effort.

Willauer that a resort tax and a SID tax would be “duplicitous,” that the resort tax had the potential to offset the costs of the projects for everyone.

Still, Willauer said the effort was a very preliminary step and that the state could nix this if it didn’t consider Twin Bridges a resort community.

On a motion by Councilmen Scott Holbrook and Matt Greemore, the council approved having Hyndman request the state to consider Twin Bridges as a resort community, the first step in the process.

At the March meeting of the town council, a group of residents shared preliminary results from a survey they’d conducted of whether the town should do the stormwater, sidewalk and curb project.

Jeff and Patty Walker brought the results this survey – post cards sent to about 200 residents, asking or their thoughts of the project. They’d received 50 initial responses to this mailing, with only two property owners approving of the project. This meant, the Walkers told the council, 96 percent of the residents of Twin Bridges disapproved of the project.

Council learned the final results of the survey from Hoyt Walker.

In three weeks time, Hoyt Walker told council – the same amount of time council used for their survey of residents about the same project – 93 post cards were returned, a 48 percent return rate.

Of these, 14 people were for the project, 68 were against it, 11 were uncommitted, 23 said they’d received no letter from council earlier about the project, 20 didn’t understand the project, and 72 wanted a special meeting on the project to held at Twin Bridges school.

Walker said some people were not 100 percent decided on the issue, and that council should further educate the community on what’s going on.

Greemore noted that the 193 people the post cards were sent to didn’t compare with the 259 letters the council had sent out to residents about the project in December on this issue.

Councilman Nolan Frandsen noted that even with the numbers Walker presented, 132 people didn’t oppose the project..

Resident John Pawley said the citizens’ survey suggests that only 15 percent of residents were in favor of the project, and 73 percent were against, calling it a “catastrophic” difference in opinions. He pointed to the number of people at the meeting to suggest this difference in opinions meant something.

Leslie Adams repeated her contention that the council didn’t include the public in the process.

However, Bill Kinoshita, owner of the The Old Hotel restaurant, said he’d received a letter from the council, and although he wasn’t at the meetings about this, noted that the money for the project had to come from somewhere, and he understood why the council had made the decisions to do the project.

In a related matter, the council unanimously approved Task Order No. 4, to seek a bid and begin construction of the initial steps of the stormwater, curb and gutter project.

Great West Engineering’s  Jeremiah Theys, PE, the architect of the project, explained that Twin Bridges met the state Department of Environmental Quality’s revolving fund guidelines in the SID, noting that loan forgiveness could be a part of this, and that the project was fast-tracked on 6th Ave. A loan was in place for the project and the SID levy would repay this loan.

Council also discussed the town permitting portable toilet company Spiffy Biffy to use the town’s sewer system in the event of an emergency, when the company couldn’t use other means to dispose of wastewater.

Spiffy Biffy owners Gary and Heather Caprara, Twin Bridges residents, asked the council for permission to dispose of about 150-200 gallons of waterwater per day from their portable toilets in the town sewer system in March. The Capraras presented a contract to the town council permitting them to use the sewer system in the event of an emergency, when other diposal means were not available.

Town attorney Lori Harshbarger had some problems with the contract.

Harshbarger said she understood the basic idea, but from a legal perspective she had problems: The town spent millions to install the sewer and wastewater treatment system, and she was concerned that if the town permitted Spiffy Biffy to use the sewer system, others, including RVs, would also be interested in doing so, and there would be no regulation of this, about what was going into the sewer system and the impact of this on the town.

Ray and Mary Smail, of Southwest Septic in Ennis, also happened to petition the council for permission to use the sewer system to dispose of wastewater when other means were not available that very evening.

Holbrook was sympathetic to the cause of the Capraras. He suggested that using town sewers was a common occurrence for many communities. Billings, he said, charges $46 per 10,000 gallons of wastewater input into their system, and he noted that the co-op is the only RV approved dumpsite in town, and charges $5 per dump.

Maintenance Supervisor Sam Novich said that he didn’t think what the Capraras were proposing – using the sewer system in emergencies – was a problem for the system, but noted that the town was not open for dumping to everyone. He said a fee should be charged for each day the system was used.

Holbrook suggested a $25 per day fee for Spiffy Biffy’s use of the sewer, “to make it inconvenient,” for emergencies only.

Willauer noted Harshbarger’s concerns and said there was a lot of liability connected to using the town sewers for others. He wondered how the council could be fair in this matter, especially with others, like the Smails, wanting the same privileges.

Gary Caprara reiterated that Spiffy Biffy was only requesting use of the town sewers during emergencies, such as the cold snap and heavy snow in late February, that prevented him from reaching field disposal sites. He also couldn’t understand why, having done all the “leg work” (providing figures on how much and other information) to get his proposal in front of council, especially as a town resident, that this wasn’t a simple deal.

Greemore noted that while the agenda included his request as a discussion item, council was not obligated to vote on it. He wanted to gather more information on the request, find out what volume of additional wastewater the sewer system could accept, before making a decision.

Willauer agreed, saying there was no need to rush into a decision on this, since it probably wouldn’t be until December that the need for it might arise.

Caprara thought it was a simple thing, and couldn’t understand the delays.

Harshbarger said the discussion was turning into a debate and that council needed to decide the limits on this, if it was to be permitted, how many people might use it, what sort of insurance might be needed and other items.

Willauer said the council would decide by December.

In March, AT&T approached the town about installing a cell phone tower in town, Hyndman told council. AT&T was offering to pay the town $1,200 per month lease to install a 144-foot tall tower that would provide better cell phone service for the community. The company offered the town a contract to install the tower.

Harshbarger had reviewed the contract for the tower and found several things that needed to be clarified.

Where is the tower going, should have been specified, she said.

Hyndman said it was to be located behind the old ice house, where a cabin had been torn down. His understand was that this was strictly an AT&T phone service tower. He also noted that he’d asked AT&T for $1,500 per month lease fee, a figure the company agreed to.

The termination of the contract was one-sided, for AT&T, not the town as a landlord. Insurance fees were a concern. Was $1 million enough if the tower fell?

Indemnification, and what the town warrantied about the tower site (free of hazardous materials) concerned her. The environmental clauses were cause to be very, very careful she said.

What happens if the town sells the property? AT&T wanted first refusal rights, and the lease was to be a five-year lease for five terms, or 25 years.

Frandsen wondered about radiation from the tower and if this would impact citizens.

Harshbarger said the given the community’s recent participation in council events, she thought the community ought to be given a chance to weigh in on the contract.

Council decided to include this item on its next agenda.