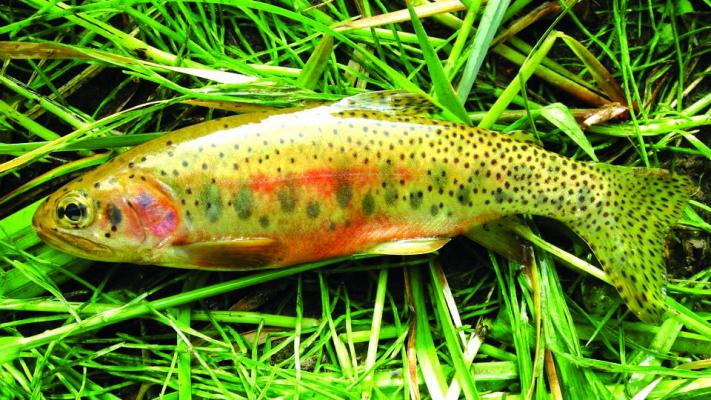 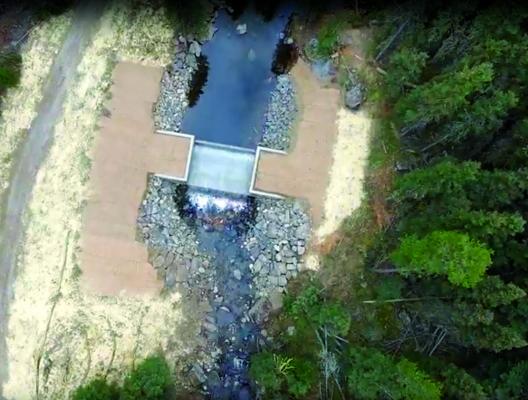 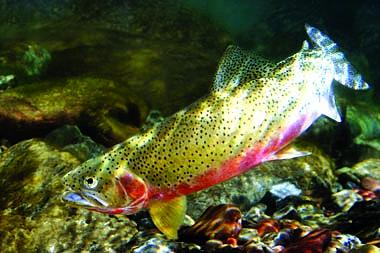 MADISON COUNTY—Thanks to a collaborative project lasting over a year, westslope Cutthroat Trout (WCT) will soon have access to a large part of their historical habitat they haven’t seen in a very long time.

A brand-new fish barrier was completed in September in the upper north fork of Spanish Creek east of McAllister, a project managed by the Turner Endangered Species Fund (TESF) and first proposed by Montana Fish, Wildlife and Parks (FWP) in April of 2017.

The barrier is an important step in habitat restoration for the species, which is currently found in only about 5 percent of its historical habitat in the Upper Missouri River watershed. It will ease movement through Spanish Creek for the trout, extending their available reach for another 17 miles and doubling the amount of habitat they can access in the area.

“Our goal was to support the project and do a lot of field work, but since it’s so much public land we let the Forest Service take the lead,” says Carter Kruse, Director of Conservation for the TESF and one of the project leaders. “They’ve been fantastic to work with. This fits into the cutthroat trout initiative we have in our organization, especially where there’s public land.”

Those 17 miles include stream access in four creeks besides the North Fork of Spanish Creek: trout will also be able to reach areas of Willow Swamp Creek, Alder Creek, Placer Creek and Camp Creeks, all in the Gallatin River sub-basin. It also increases access to Big Brother and Chiquita lakes.

“Stream habitat within the project area is capable of sustaining a large population of WCT,” wrote FWP Region 3 Supervisor Sam Sheppard in the project outline. “In the Gallatin River portion of their native range, wild aboriginal non-hybridized WCT remain in low density in only 0.5 of 1,048 suitable stream miles.”

That translates to about 0.1 percent of available stream miles. FWP’s statewide fisheries management plan goal is to have trout in 20 percent of the species’ historical range miles.

“Typically in these connected watersheds, you have to have a way to prevent the non-native trout from getting into the area you’re trying to restore,” says Kruse. In an ideal situation, such as another TESF in Cherry Creek in 2013, a natural waterfall served that purpose. In Spanish Creek, he says, “we had to build our own waterfall.”

Construction of the barrier itself cost around $15,000 and took a little over a year, from August 2017 to September of this year. Along with increasing habitat area for WCT, the project was designed to help create a self-sustaining population large enough to provide consistent numbers of the trout to facilitate other restoration projects.

“They’re kind of a catch-22 because you’re putting a manmade structure in a natural system,” says Kruse. “But the status of cutthroat trout is dire in that watershed, so we weighed whether it was worth it to put a concrete structure in a mountain stream, and it was.”

It’s the latest of a series of native cutthroat trout restoration projects sponsored by the TESF Cutthroat Trout Initiative covering around 250 stream miles, a series which seeks to mitigate population declines due to species competition, chiefly against species introduced for fishing purposes into streams where they are not native.

The TESF notes that WCT were once the most widespread species of cutthroat trout, occupying more than 56,000 miles of streams in the Columbia and Missouri river watersheds. Their decline has been steeper to the east of the Continental Divide, where genetically pure populations have fallen by 95 percent or more.

Spanish Creek’s new barrier was a collaborative effort among the Custer-Gallatin National Forest and Fish, Wildlife and Parks in addition to TESF, and three-quarters of the project area is on accessible public land. It also caters to a major plan to protect water-dwelling species all over the United States: The National Fish Habitat Partnership Action Plan (NFHPAP).

The NFHPAP, first written in 2006 before being updated in 2012, seeks to remedy some of the challenges created for fish populations due to the channelization, damming, dredging and polluting that urbanization and development have caused over the last century. It outlines five major objectives, and the Spanish Creek barrier will specifically address the first two.

The first goal of the NFHPAP is to “protect and maintain intact and healthy aquatic systems,” via restoration projects and educational programs.

“Numerous fisheries and habitats across the country are in need, more than can be repaired or protected at one time, so strategic focus on project selection and completion is critical to achieving positive results,” the plan writes. “We are constantly learning from our projects.”

The plan’s second goal is to “prevent further degradation of fish habitats that have been adversely affected,” and that’s where the Spanish Creek barrier will come in the handiest, restoring to native trout populations access to miles of stream they haven’t had in years.

On a more local level, the project helps fulfill the goals of one of the National Fish Habitat Partnership’s local cooperatives, the Western Native Trout Initiative (WNTI). The initiative grades 21 species of trout native to the western U.S. and Alaska based on level of concern for things like population health, degradation of habitats, non-native species impacts and public awareness of species needs.

On its updated strategic plan released in 2016, WCT received a high level of concern in a newly added category: climate change. The Spanish Creek barrier can’t do much to combat climate change, but it can help on a local level to address those other areas of concern.

The second phase of a five-phase project funded by the TESF and overseen by a U.S. Forest Service engineer and hydrologist, the project will continue with the removal of non-native trout and the restocking in of WCT in the area—hopefully enough to bring about sufficient recovery to then stock other suffering populations from Spanish Creek in the future. The single barrier in Spanish Creek could have wide-ranging impacts for regional trout populations in the years to come.

“If you stock it appropriately, we’ve found in our biggest projects that it only takes three or four years to the population to explode,” says Kruse. “Then they’ll come downstream and it allows anglers to find cutthroat trout elsewhere. It’s an added resource for people to use.”