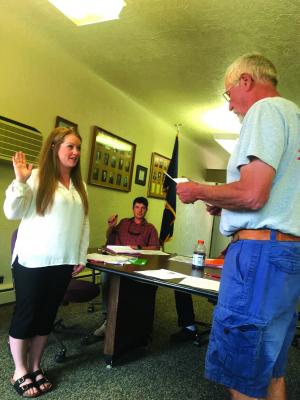 Changes would bump bill about $17.50 per household

SHERIDAN – Water rates in Sheridan may soon be changing.

The town council is looking at raising the rates it charges for water.

The council approved a “resolution of intention” to change water rates at its July 9 meeting.

However, before the new rate system becomes final, the council will hold a public hearing on the rate increase on Aug. 13, at 6 p.m. at the Sheridan High School Library, during its regularly scheduled council meeting.

Under the current rate system, Sheridan charges the following rates for water:

Each water user is charged a monthly base rate of $30, plus a multiplier based on the size of the supply line, plus a useage charge for how many gallons of water are used.

What the council is proposing will bump the base water rate to $45.

The multipliers will remain the same, although a 3-inch line now has a multiplier of 16, for a base rate of $720 per month.

The council also intends to bump useage charges up some, based on the number of gallons used.

This change would take place in September, if finalized by the council.

The resolution of intention approved by council also allows council to bump water rates again, after an annual review of the costs involved in operating the system. These rates must be vetted during another public hearing on the proposed changes.

For the average homeowner with a ¾-inch water supply line using 10,000 gallons of water per month, according to the resolution, the increase in costs would be about $17.50, or a jump of almost 44 percent.

The average household uses about 6,000 gallons of water per month, according to town water records.

“In the end, the bill is about the same as ours,” he told council.

The rate increase was largely brought about by Sheridan’s water supply wells drying up, and the need to find new water sources.

Sheridan has five wells, but just one is producing water, and according to Stump, voluntary conservation methods aren’t making a big enough dent in useage, despite water restrictions in place since last July.

Stump said irrigation – not bathing or drinking water – was the biggest use of water in the community.

Stump said the town has certain rights on the creek, and wondered if it would be possible to use these, to augment the current supply problems.

Stump said he’d looked at an old, no longer used, town water facility on the creek, visited the headgate and a spring house, a couple of miles upstream. These might represent two 50 gallons per minute water resources the town could tap, he told council.

Stump said the town would need to treat this water, because it is surface water.

He said he received a figure of about $2 million to hook back up and use these water sources. There were also issues with water lines crossing seven additional properties.

Councilman Mike Walter said the town should preserve its rights to this water source.

Councilman Rahn Abbott believed the cost of acquiring this water would make it cost prohibitive, and wondered about its potability. He suggested keeping the water source as a dry hydrant resource since it ran close to the county road.

• David Stout of the Ruby Conservation District and Watershed Council proposed that the watershed district and the town co-host meetings related to water supply problems.

• Council approved a cost of living wage increase for town employees of 3 percent.