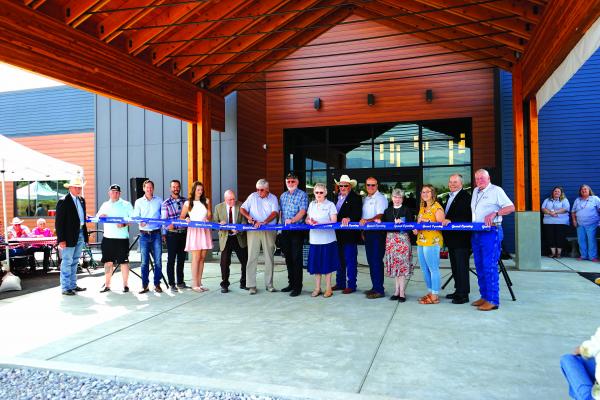 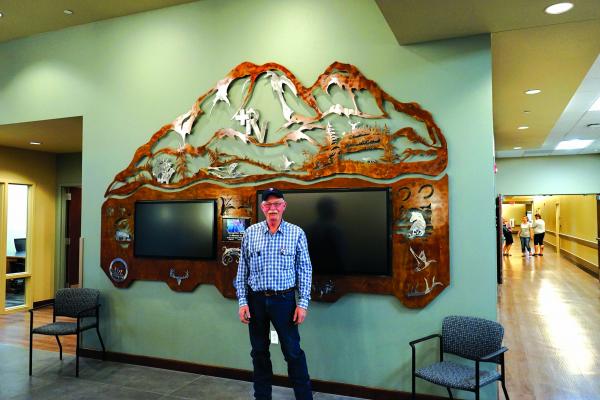 The culmination of 10-year project welcomes the public

SHERIDAN—The idea of a new Ruby Valley Medical Center has been in the works since 2008, and this weekend the realization of that idea opened its doors to the residents of the Ruby Valley and the patients it will serve.

The original hospital, built in 1964, is a 17,000 square foot facility. The 2018 version is around 30,000 square feet, built by a loan of nearly $10 million from the USDA Rural Development Community Facilities Program, with an additional $2.5 million raised by the Ruby Valley Healthcare Foundation.

As a nonprofit critical care facility, keeping to a set budget has always been a priority, so the existing facility has held out about as long as it could have without either a remodel or a completely new hospital. Building a new facility ended up costing around $600,000 less and cutting as much as a year off construction time.

At the grand opening, visitors could tour the new facility, which includes many new and state-of-the-art pieces of equipment, expanded care areas across the board and many elements the hospital has never had before.

One such element is something so simple it could almost be overlooked, but which makes itself obvious in its absence. The old hospital had no air conditioning; the new one is fully climate controlled.

Some of the biggest changes could be seen in the physical therapy wing of the new hospital. The old one wasn’t nearly large enough for the number of patients it served.

“We had one, sometimes two, private treatment rooms,” says communications coordinator Debra McNeill of the old facility. “But those also stored a variety of therapy equipment.” Patients often had to do therapy exercises in the adjoining hallway.

The new PT wing features over twice as much space as its predecessor, as well as new exercise and rehabilitation machines, a shower and changing room, four private therapy rooms with adjustable beds, and outdoor access for patients.

Another new feature is one that was specifically requested by the residents of the Ruby Valley: a designated specialist wing.

The hospital conducted a survey back in 2011 that polled the community on what they’d like to see from their medical providers and a particular value of the local community was a desire for increased access to specialists like cardiologists, podiatrists and OB-GYNs.

The new hospital houses several private exam rooms specifically designated for specialists like these, who will be available certain days of the week or month according to a schedule yet to be determined.

There is also a new tele-medicine room, which McNeill notes is vitally important in a rural area like the Ruby Valley. She says the tele-medicine service will be invaluable in situations of critical need like mental health crises that would allow a provider to speak directly to a patient without their coming into the clinic.

Saturday’s grand opening was the culmination of three days of celebratory events for the new facility. The hospital hosted a barbecue for employees and their families on Thursday, August 16 and a reception for donors to the new hospital on Friday, August 17. McNeill says the final celebration went “about as perfectly as we expected.”

Visitors heard the national anthem sung by Katie Hall and an invocation by Reverend Janis Hansen. Representatives from Ruby Valley Medical Center, the Ruby Valley Healthcare Foundation, the Montana Hospital Association and USDA Rural Development were all among the featured speakers.

A LifeFlight helicopter demonstrated one of the first landings on the hospital’s new helistop, and visitors were able to meet the pilot and even take a turn in the co-pilot’s seat (staying firmly on the ground).

Visitors were then able to take a self-guided tour of the hospital and meet the department heads in their respective areas. Most departments also featured comparison photos of the corresponding areas in the old facility, so everyone could see exactly what a positive change the new construction is.

On first entering, they got a view of the interactive donor wall honoring the dozens of individuals and businesses who donated to the building of the medical center.

Del Bieroth designed and sculpted the decorative wall, which features many of the elements that make the Ruby Valley unique: its ranching, fishing and wildlife in particular. The sculpture is inlaid with two screens that will feature donor lists, images of the Ruby Valley and information about the hospital.

Ruby Valley Medical Center staff began moving into their new space on Wednesday, August 22. For many of them, as for the entire Ruby Valley community, a decade-long goal finally became a reality this weekend.