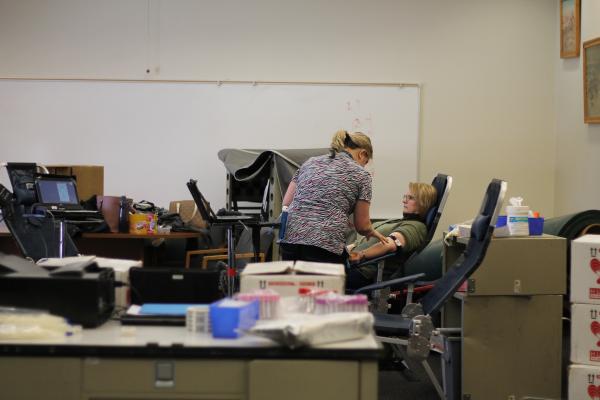 “This flu season is rivaling our 2009 swine flu season,” said Madison County Public Health Nurse Melissa Brummell. “We suggest getting a flu shot if you haven’t yet because it’s better than nothing.”

Madison County is seeing an increase in hospitalizations due to the flu, nearly three times the normal amount, but cases are not as severe as others around the state. So far, 21 cases of influenza have been reported in Madison County, as of Feb. 5, with 29 percent of reported cases hospitalized and zero deaths. Last year, only 10 percent of influenza cases in the county were hospitalized.

As the flu season drags on, prevention is still possible – hand washing, flu shots and staying home when you are sick are easy measures to prevent infecting yourself, your office, classmates or coworkers. “We encourage people to go to the doctor if they are having any respiratory issues or difficulty breathing,” said Brummell. “Or if they are within the age groups more susceptible to the flu, infants and the elderly.”

According to the American Red Cross, a winter blood shortage has reached a critical level, thanks in part to both the flu season and winter weather. “Ongoing severe weather has more than doubled the number of canceled American Red Cross blood drives and caused the resulting blood and platelet donation shortfall since earlier this month,” stated Scott Shanahan, senior donor recruitment representative for the America Red Cross. More than 550 blood drives, including a Feb. 9 drive in Virginia City, have been canceled because of weather, causing 16,500 blood and platelet donations to go uncollected.

While wintry weather continues to wreak havoc on the state and nation, the intense flu season and special H3N1 strain is playing its part in the blood shortage. “People are already in need of blood, they don’t need the flu, too,” said Peggy Zeimer, a phlebotomist with United Blood Service.

On Feb. 12, United Blood Services were in Twin Bridges, hoping to help mitigate with a blood donation. Zeimer, along with two other phlebotomists, traveled from Billings for the day-long blood drive.

“You never know when you may be in need, or someone you love may be in need of blood,” said Kiala Hastings during a lull in the Monday’s drive. Hastings went to school for her EMT license and said she has always wanted to work in the medical field.

On average, it takes three full days for a unit of blood to be tested before it can be donated. “We have to test for everything before the blood can officially be donated – any kind of transmissible disease, we’re testing for,” said Zeimer. Both Zeimer and Hastings said the majority of blood donations go to cancer patients, but there’s a need for all sorts of patients – burn victims, trauma victims, etc.

“If all eligible blood donors gave blood twice a year, blood banks would be self-sufficient,” said Brummell. “One hour of your time a year and you could potentially save a life.”

*A list of all scheduled 2018 blood drives in Madison County and the surrounding areas can be found on United Blood Services website.