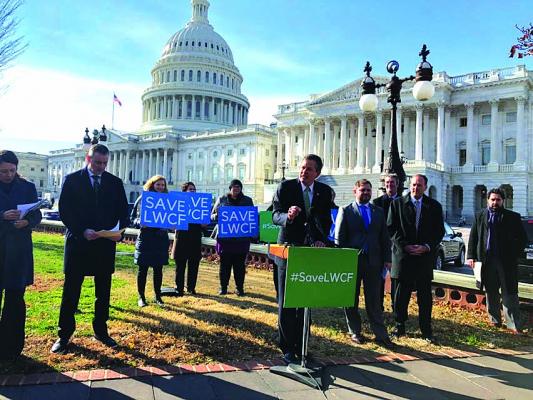 HELENA - Montana’s Republican Senator Steve Daines and Democratic Senator Jon Tester joined congressional representatives and conservationists for a press conference in Washington, D.C. on Thursday, November 29 to call for the permanent reauthorization of a program first established by President Lyndon Johnson in 1964.

The Land and Water Conservation Fund (LWCF) is one of the largest sources of government funding for public lands and recreation. The fund partners with more than 1,000 entities, including businesses, conservation groups and federal, state and local governing bodies, to preserve areas like national parks, monuments, battlefields, wildlife refuges, trails and national forests.

“The land and water conservation bill assures our growing population that we will begin, as of this day, to acquire…the outdoor recreation lands that tomorrow’s Americans will require,” said Johnson when he signed the bill. Since then, LWCF has funded countless projects across the U.S. with the interest of preserving public lands, history and culture.

Daines touched upon his upbringing in Bozeman while praising the work of the LWCF.

“When my parents moved to Bozeman when I was a year old, it was a town of 15,000,” Daines said. “Today, Bozeman is the fastest-growing micropolitan area in America. Why is that? It’s because of the quality of life there, and that’s because of programs like the LWCF that allow us to access public lands.”

Daines was joined by senators from Colorado and Washington and representatives from New York, Pennsylvania and Arizona to call for permanent funding of the LWCF, which expired on September 30. The bill has required consistent re-upping over the past several years, but President Donald Trump’s new budget has drastically cut the program’s funding, something at which Senator Jon Tester expressed frustration on Thursday.

“Over the years, the LWCF has set aside thousands of acres of land, increased access to our public lands so we can hike and bike and hunt and fish, and done some great things for parks and urban areas,” Tester said. “The president’s budget cut this fund by 99 percent. We need $900 million in it. That’s what it was initially funded at. It’s important we make this a top priority.”

The $900 million budget requested by LWCF has been funded in the past by offshore drilling revenues, which measured more than $5 billion in 2015 and about $3 billion in 2016. In recent years the fund has not received its full funding, what the congressional push seeks to remedy.

“We need to get the LWCF permanently reauthorized,” said Washington Senator Maria Cantwell. “It’s time that Congress not go into 2019 with a question mark around something that’s so important to our economy.”

Cantwell wasn’t the only speaker to touch on the importance of recreation to state economies. Tester noted that the recreation and outdoor industries bring $7 billion to the Montana economy annually, and the LWCF reports that outdoor recreation creates 6.1 million American jobs and brings in $39.9 billion in federal tax revenue.

- The Forest Legacy Program is a voluntary program designed to protect forest land from development via conservation easements or outright purchses;

- State and local assistance grants, which make up the largest portion of the LWCF’s work.

In its 54-year history, the LWCF has facilitated over 42,000 grants to state, local and tribal governments to create and expand parks, recreation facilities and strategic recreation plans. In Montana, the fund has contributed to over 600 projects.

Locally, since 1964, 17 of those projects inhabit Madison County. From city parks in Sheridan and Ennis, to the Varney, Valley Garden and Burnt Tree fishing access sites used by thousands of Madison River fly fishermen annually, LWCF has contributed nearly $570,000 in grants to Madison County alone, supporting one of the area’s largest economic sectors.

In addition to the politicians, community members have been advocating to fully fund LWCF since before its September expiration. Lynn Scarlett, head of external affairs for the Nature Conservancy, noted that in just a month, over 2 million messages have been sent to policymakers from people who care about conserving their public lands.

“We have 1.5 million members, and they have one big message: we need mandatory, permanent and full funding of the LWCF,” Scarlett said. “Why that message? We at the Conservancy like to say that nature is not just nice. It’s essential. The benefits are vast.”

Several congressmen made a plea for Congress to accomplish this goal before the end of its current session during the upcoming month. The bill to fully and permanently fund LWCF, co-sponsored by 42 Democrats, six Republicans and two independent senators, was referred back to the Senate on October 2 by the Committee on Energy and Natural Resources. The 115th Congress ends on December 14, so senators only have days to approve the bill before Congress goes enters recess.

“This shouldn’t be a Republican or Democrat win, a conservative or liberal win,” Zeldin said. “It’s an American win. We have a responsibility to leave this world better than we found it.”