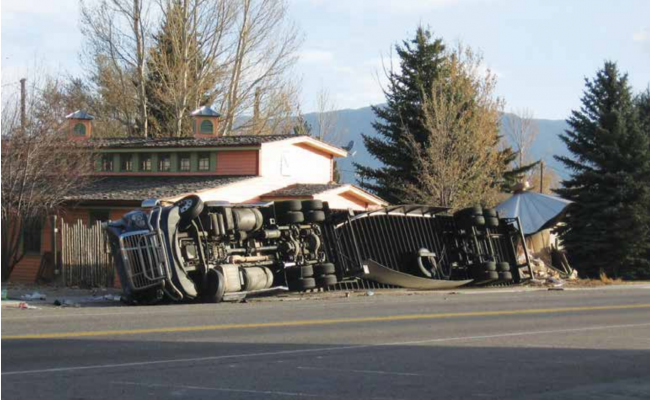 A tractor/semitrailer rolled onto its side on Main Street in Ennis at approximately 3:45 a.m. Saturday morning coming from the southeast entrance into town. The Madison County Sheriff’s Department Dispatch Center received a call reporting the crash at 4:32 a.m.

A crash investigation by Montana Highway Patrol (MHP) is underway. The driver was issued a citation for exceeding the posted speed limit by MHP, according to John Moore, chief of police for the Ennis Police Department.

Ennis Ambulance was dispatched to the scene for a medical related emergency not related to the crash, according to Moore. Madison County Sheriff Phil Fortner said Madison Valley Medical Center reported the patient was okay.

Tim’s Diesel and Auto Repair responded with two heavy wreckers and the tractor/semitrailer was removed by 1 p.m.

“I think it’s safe to assume that speed was definitely a contributing factor and inattentive driving, I would say at the least,” Sheriff Fortner said. This early morning time frame is typically when these wrecks occur, he said. Moore attributed the crash to speed as well.

This is the third semitrailer to wreck like this on the same stretch of highway that Sheriff Fortner can remember. In June 2019, a semitrailer truck hit the corner of the Riverside Motel, just missing the Nearly New Shoppe. In 2014, a semitrailer flipped into Willie’s Distillery.

One building and an out-building of the Riverside Caverns, owned by Adams Ale LLC, sustained damage, Moore said. The building is currently unoccupied.

A traffic calming study has concluded in Ennis and feedback is being analyzed before next steps are taken. Ennis partnered with Montana State University’s Western Transportation Institute to conduct the study and assess different ways of addressing the speeding problem on the Ennis Main Street portion of U.S. Highway 287.