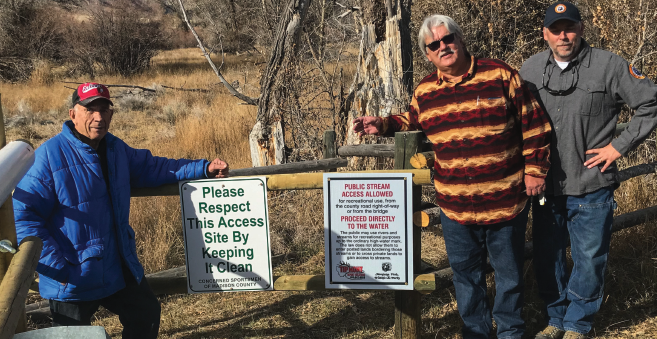 The people’s right to Montana’s streams

Montana Fish, Wildlife & Parks constructed an access site at the Coy Brown Bridge on the Ruby River mid-October. It is the fourth access built off a Madison County bridge since the deadline to appeal the Montana Supreme Court’s decision, involving the Kennedy vs Public Land and Water Access Association case, passed in 2016.

After the 12-year saga ended in the courts, MTFWP and community members addressed infringing fencing that restricted public access to the Ruby River. The more user-friendly access sites next to four different county bridges are simple structures built within the county’s right of way.

“That’s not ours,” MTFWP Region 3 Program Manager Jay Pape said. “That’s the public’s, we just help them know they can access it.”

Signs posted on encroaching fences along county bridges, which state “no river access,” were paired with MTFWP signs stating otherwise. Sportsmen of Madison County, Mark Savinski and Howard Chrest, are involved community members assisting in the access sites in the Ruby Valley. They have their own signs at the sites, reminding people to respect the land.

“If someone is not doing that [respecting the surrounding private property] they should be ticketed,” Savinski said.

MTFWP informed land owners prior to altering problematic fencing. Addressing stream access at county bridges, requires minor changes to land owners’ fences. It is one day of labor for two people and the materials cost a couple hundred dollars, according to Pape.

“We’re not in the business of removing everyone’s fences,” Pape said. “That’s a county issue.”

Any fencing blocking access was removed and replaced with an entry. Gates or walk-throughs were designed to allow people to enter, while keeping livestock contained. MTFWP will negotiate with landowners to find a design that both parties can agree on.

“There’s a way to allow access without being intimidating,” Pape said.

Madison County’s Road Committee, an appointed committee that assists the county commissioners, helps define a road as a prescriptive or petition road. A petition road is a road that a landowner at one time gave up to the county to maintain. Sixty feet is the set width of any petition road, which includes the road and the county right of way.

Historic use defines a prescriptive road. Landowners of a less populated and less visited Montana permitted use without documented agreements, it was local knowledge. The ruling in the Kennedy v PLWAA was the first time that public prescriptive roads were given a width of use. The public can use the road and the county right of way on each side, but each prescriptive road is different depending on its historic use.

The Supreme Court ruling also established that historical recreational use is an element of determining a prescriptive road.

“The Ruby’s been contentious for a long time,” Pape said. “This sets the precedent.”

Legally, any fence that prohibits access to a stream off a county bridge can be climbed over- it is on the county road right of way, not private property. Once in the river, individuals must remain within the high-water mark as the stream access law requires.

Often, beaten paths to the river cross onto private property lines, which is trespassing. Pape recommends staying close to the bridge until reaching the high-water mark.

Recently, Madison County built a new bridge in Laurin and took the proactive action of building a walk-through for access to the river. But the first site that was built spring of 2017, the Lewis Lane Bridge access, is “text book style for stream access,” according to Savinski and Chrest. There are access points up and down stream of the bridge, it is wide enough for a walk-through and a water craft can be pushed over the rolling PVC pipe to easily get into the river.

“Without FWP, none of this would have happen, and the three county commissioners have been very supportive,” Savinski said.

As active concerned citizens, Savinski and Chrest have helped act on stream access issues. According to them, it will take the participation of others to uphold these efforts. About two weeks ago, Tony Schoonen died in Butte. He was a champion for stream access and represents the aging generation of river recreationists who have been active in these projects.

“The young folks have to get involved to keep this thing going,” Savinski said.