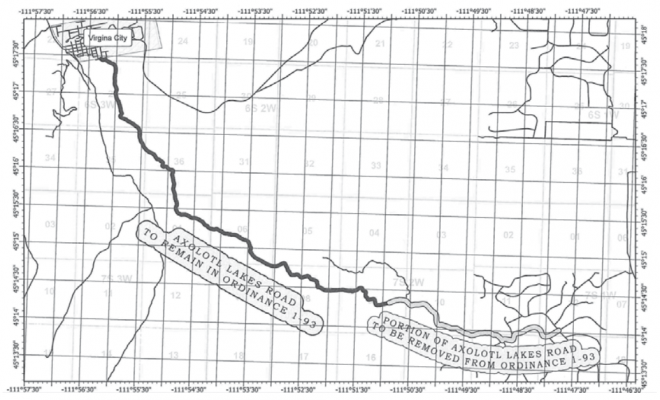 For nearly three decades a portion of the rugged Axolotl Lakes Road, which connects the Shining Mountains neighborhood in Ennis to Virginia City, has been closed to automobile traffic but open to snowmobile use from December 1 to April 15. That scenario may not be the case for long, though, as increased development in the area has spurred demand for expanded access.

A recent request from new homeowners along the roadway to amend the ordinance banning motorized traffic and open a portion the road east of Axolotl Lakes to those vehicles year-round was presented to the Madison County Board of Commissioners earlier this year. Commissioners presented and ultimately approved the first reading of the request to the public at their weekly meeting on April 13.

Commissioner Dan Allhands said that he’s done a lot of research on the proposed ordinance change. “This is not something that we’re taking lightly,” he said. “And the more (research) I do, I don’t think that Ordinance 193 is even enforceable.”

Allhands cited state statute that contradicts the commission’s ability to limit public road access of any kind. From what he found, commissioners do have the right to close roads to preserve them from deterioration or for safety issues, but only temporarily.

A real estate lawyer that works for the county provided Allhands with the opinion that the ordinance is not enforceable as well. He’s also looking for several other opinions including one from the attorney general.

One meeting attendee expressed his understanding in allowing homeowners to access their homes, but wondered about road maintenance such as plowing – would the county have to take on that task on a road that’s not really maintained?

“Those are always valid questions,” said Commissioner Hart in response to the plowing inquiry. “And that’s not the only (road) like it.”

Allhands agreed, likening Axolotl Road to Mill Gulch Road east of Laurin. “Once you get so many homes up there, you’re probably going to have to maintain the road,” he said. “And we do have to go and plow it, it’s just basically what it is.”

Gravel work has been done to the road recently, and more work is planned. Allhands noted that the Bureau of Land Management has tentative plans to redo part of Axolotl Lakes Road with funds from the Great American Outdoors Act which would widen the roadway and add drainage.

“I look at this as a compromise,” said Allhands. “People are moving here, there’s a subdivision and back in the day there was no subdivision or houses on Axolotl Lakes Road, but now there is, and my fear is if we push it, and one or several of these landowners get an attorney, there won’t be anything here.”

If the portions of Axolotl are opened as requested, Allhands said he sees the opportunity to keep other roadways included in the ordinance closed seasonally. He said mostly, the ordinance has not been needed to be enforced – in the more than a decade that the county attorney’s been here there’s only been one instance of required enforcement.

Virginia City Mayor Justin Gatewood has expressed concern with the proposed ordinance update since it was initially brought to the commissioner’s attention earlier this year. His initial request for the commissioners to hold off on any public readings or decisions was agreed to in early March, but with the reading back on the agenda Gatewood attended the meeting to reiterate his misgivings.

Gatewood wondered if the commission is obligated, once a request is received, to craft an ordinance and pass it on the first reading? Or can the request be denied? Gatewood’s research suggested that a denial before first reading is allowed, so he wondered why the commissioners were moving ahead with this one.

Gatewood also requested that Allhands elaborate on the compromise he spoke of earlier in the meeting, since if the ordinance is unenforceable, what would it matter if the portions related to other roadways continued to exist?

“If the private landowners sue, I don’t think we are going to prevail,” Allhands responded. “And that’s where we need to get some more opinions… I honest to God don’t think you can deny people access to their properties.”

Some fingers had been pointed at the new land and homeowners in the area – hadn’t they known when they’d purchased winter access was not permitted? Real estate agent Melinda Merrill spoke to that, explaining that no, this information is not recorded so it does not show up on title commitments. “So, these people bought without knowing,” she said.

The three commissioners approved the first reading of the ordinance change and will gather more information before scheduling the second reading and public hearing. At that meeting, if it takes place, the commissioners will read or make available the numerous written comments – both in favor and opposed to the change– they’ve received as well as take public comment. If approved, the changes go into effect no less than 30 days later.

A copy of the draft ordinance is available on the county’s website at https://madisoncountymt.gov/ArchiveCenter/ViewFile/ Item/1763