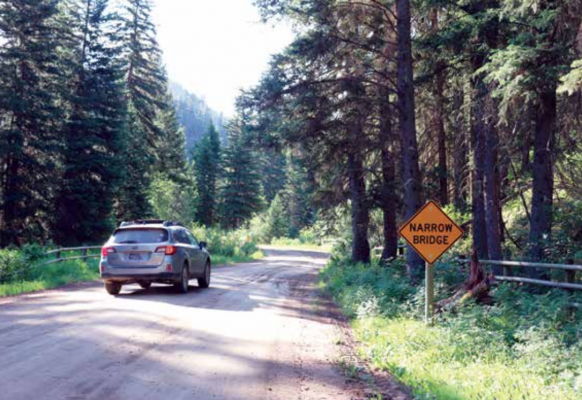 Goals of the project include improving line of sight on the narrow roadway as well as addressing drainage issues with the addition of culverts. Keeping work within the 60-foot road easement will include some cutting into the hillside, said Hart.

“That’s the goal, get away from the creek a little bit,” Hart explained.

Adding culverts will address environmental concerns, aiming to decrease runoff into Jack Creek. Less muddy runoff will improve the stream quality of the waterway, which like all streams in Madison County, is deemed impaired by the Department of Environmental Quality.

Commuter safety is also a component of the project paid for by the county via an INTERCAP loan. Hart said the Big Sky side of the county has expressed interest in the stretch, as it serves as an alternate evacuation route for the community.

One of the five bridges located approximately in the middle of the county stretch, known by commissioners as Jack Creek Four, will be replaced as part of the project. This work won’t start until 2022, said Hart.

The bridge replacement will cost $338,000 and is being funded by a Montana Department of Commerce Grant through the Montana Coal Endowment Program. The MCEP has funded approximately 20 Madison County bridges over the years.

Three of the five bridges on the canyon stretch have already been replaced, the most recent two being located closest to the Y that separates Jack Creek Road from Jack Creek Bench Road in the early 2010’s.

Hart said that the county will provide public meetings and notices related to the project when the time comes as there will temporary road closures involved.

Commutes on the Madison County sections of the roadway leading to the private portion which connects Ennis to Big Sky typically begin at around 6 a.m. and pick back up at 4 p.m., “So we will try to work around that and keep it open during the really busy times,” said Hart. “And then close it temporarily during the day.”