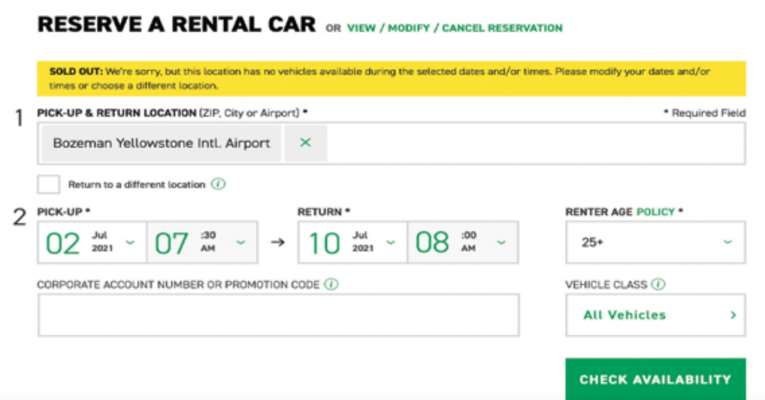 Picture this: a pandemic happens, everyone decides to embark upon home improvement projects and couch purchases skyrocket. As the pandemic starts to seem a bit more manageable, you find yourself moving to a new town to begin the next step in your career. The problem is you do not own a couch and all couches are backordered through the summer. Oh, and the company that makes the springs inside the couch gets cyberattacked, so with spring production unavailable, you are looking at November before a couch is available to you.

At the beginning of May, it started to hit the headlines that a microchip shortage was impacting car production, leading in part to a shortage of rental cars. (I, for one, did not realize that cars needed a microchip to function in the first place…)

“The fact that you can’t buy a car here has to do with the fact that someone turned off a computer chip plant in Singapore…” Paul Reichert, executive director of Prospera Business Network, said shows how ‘connectivity is exposing itself’ so much more as the world recovers from the coronavirus pandemic. Prospera provides economic and business development to Park and Gallatin counties.

Before the microchip issue, in the depths of the pandemic when the country was hunkering down at home and travel was essentially nonexistent, rental car companies sold off huge portions of their fleets to make it through the lack of demand. According to The Washington Post, one of every three rental cars in service before the pandemic are no longer available, and the force is not expected to be restocked until 2022.

Hertz—a major car rental company—filed for bankruptcy in May, cancelled $4 billion in car orders and added 198,000 cars into the used car market, The Washington Post reported. People wary of mass transit and rideshare apps during the pandemic started purchasing used cars to get from point A to point B, drawn to the commuter-style cars that Hertz was selling off. Used cars, the Post reported, were rental companies’ CARES Act.

Low numbers of computer chips, less interest in new cars, car manufacturers focusing on making cooler cars with the microchips available to them—and here we are with very few rental cars and a rebounding population, ready to vacation.

And, as your basic economics lesson for the day, when demand for something goes up and it is not available, costs also go up.

“I think the community is a little concerned that people will cancel their reservations and not come because of the cost barrier,” Anna Johnson, director of business development for the Big Sky Chamber of Commerce, said about car rentals. Johnson hosted a virtual lunch hour conversation for anyone interested in the Big Sky community’s front-of-mind concerns and summer plans on May 6.

“A lot of people, I think, are being lured to the West,” Eric Anderson, marketing director of Big Sky Vacation Rentals (BSVR), said. “It’s kind of the trend right now. It’s not just us, but kind of the whole Rocky Mountain west, but Big Sky in particular.”

Anderson described summer in Big Sky as a driving market. It is more the home-base for vacationers looking to see Yellowstone or adventure around southwest Montana as a whole.

He noticed regional changes in families booking homes through BSVR this summer—less from the Midwest, which was typical, and more from the East and Southeast—and those traveling from further are booking earlier, resulting in families used to a particular home they rent each summer already snagged months ago. Anderson felt this trend was caused in part by the added direct flights into the Bozeman Yellowstone International Airport (BZN).

“I think it’s the first summer we’re going to see the full effect of all the new routes,” he said.

BZN has been growing consistently through the years but Brian Sprenger, accredited airport executive at BZN, said the degree of growth the airport is experiencing now is uncommon.

“We typically see growth year over year, but this amount of growth is exceptional, and that changes the dynamics. We’ve been working with our rental car companies for several months, alerting them to what we’re seeing, but I can tell you even in January we didn’t know the degree that traffic was going to build here. We’re probably double the growth now compared to what we were expecting in January and even early February,” Sprenger said.

Sprenger described a change he is seeing in the way people are planning trips as a result of the rental car shortage. People are keeping cars longer, setting up a rental for eight rather than just six days, leaving two whole days where more cars might have been available out of the pool.

Some of Anderson’s clients have been left with a $700/day Suburban to rent—the only option—and paying an additional $6,000 for a family vacation, which is certainly not feasible for all.

Treasure State Shuttles, out of Ennis, Mont., is expecting increased business this summer, too. Kelley Knack, owner of Ennis’s primary shuttle company, explained she usually starts May off with a bang, but is adding at least ten trips per week now. She even has had to turn people down, which has never happened before.

“It’s going to triple our business and we decided at the beginning of the summer, we’re only going to do what we can do. We’re going to max out what we can do in a day. We’re not going to up our rates—we want people to come and enjoy this,” Knack said, describing it as the Montana thing to do.

Big Sky does have other transportation options. The Big Sky Transportation District (BSTD), that operates the Skyline and Link to the Peak bus routes in and around Big Sky and to and from Bozeman, offers free trips in Big Sky and a minimal fee to get into the greater Bozeman area.

“We’ve had ongoing calls and emails about service to the airport in the past, certainly before the pandemic and the rental car issue, and we’ve always told people that our service is set for people who are already in the area,” David Kack, coordinator for BSTD said. “So, we say we do not provide service to or from the airport and if someone wants to use our service, you have to get to one of our bus stops.”

Kack mentioned talk of adding an airport trip in some fashion to the bus services. He thinks the way it would make the most sense is by adding a whole new service, charging a bit extra but keeping the other prices the same, and trying to find a pattern of high-volume times at the airport to service.

But, of course, extra routes cost more money. Kack said a winter season of routes totals around $45,000 with fuel, maintenance and operator costs considered. It would depend on whether Gallatin and Madison counties or Resort Tax or various clubs would be interested in designating more money to the transportation district to make this happen.

Some rental car companies are able to share cars back and forth, adding cars to one market that may not be as needed where they originated. However, especially in this region, Sprenger noted, the demand is high across the board, which makes sharing difficult. Sprenger said as far as he knows, there have not been visitors left at the airport without a rental car if they needed one without booking ahead. He thinks the press on the situation has encouraged people to book ahead but acknowledged that it is possible it has not yet been observed at BZN.

Jeff Wadekamper, airport director at the Helena Regional Airport, said recovering demand for rental cars is also being realized at the Helena airport.

“We have noticed that our local rental companies have taken delivery of some additional vehicles recently as our passenger traffic has continued to recover,” Wadekamper said. He also noted that from what he has heard from car rental users, prices have gone up across the board.

Other solutions including Turo—a car sharing app similar to Uber, but instead of sharing a driver, you share the car—and shipping cars to travel destinations are available to vacationers. Anderson has not heard of any of his clients trying Turo yet, but some have shipped their cars to themselves for about $1,200-$2,000 each way.

Ben Keefe, one of the owners of Mountain & Canyon Cab Co. in Big Sky has heard the ghastly costs and unavailability of rental cars come up in conversations with clients. The Cab Co. has just been in business for a little over a year, so Keefe does not have much in terms of numbers to compare with his volume now.

“I’m hearing some pretty crazy prices for week-long rentals,” he said. With just two cars in his fleet so far and reasonable prices compared to the $650/day Hertz quote, Keefe hopes to expand the company’s offerings.

“We’re just needing to find the workers first,” he said, which Kack identified as a prerequisite before BSTD could expand.

As both the Big Sky and Ennis areas need as people keep coming to visit and the local workforce is not there.

Sprenger recommended travelers book rental cars in advance but also remain adaptable and think about various travel components the same way you would booking a flight. Consider alternatives that may save money and time, like picking a flight without multiple layovers or leaving first thing in the morning.

The rental car situation is pointing out how connected the world is. More so, it shows how if one part of the supply chain fails or breaks down, the consequences may be realized in a totally unconsidered way. “I never thought much about car rentals until I heard this,” Reichert said.

Even further, if the supply chain is working without issue, there still might not be enough workers available to meet the demand of consumers.

“We have got to create resilient systems. We have to think differently about how we’re shaping and building the economy, how we’re going to come back and rebuild a little—and more on the community development side—critical infrastructure,” Reichert said.

Car rentals are the springboard, in Reichert’s words. The red flag. At the core, there is a systems issue and an opportunity to address that.

Anderson remembered when Big Sky Chamber lunch hour discussions were largely focused on how to make Big Sky a year-round destination, not just bleeding out in the summer when the resort closes. He looks at the rental car shortage as part of the town’s growing pains.

“It’s probably a better set of problems than the old problems,” Anderson said. “We’re just looking forward to it, and we’ve gotta roll with the punches.”