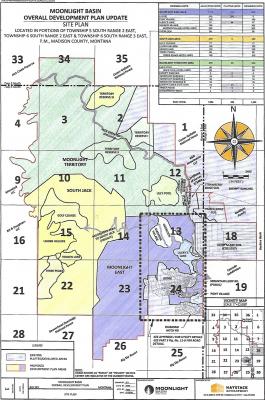 Moonlight Basin Montana Acquisitions LLC, a property development company operating at Big Sky, has requested an increase to the maximum number of residential units it can build on its 8,700-acre resort property. The company also requested to build 100 additional units in an environmentally sensitive area known as Moonlight Territory. The Madison County Commission was scheduled to consider Moonlight Basin's amended overall development plan application on March 13.

The Madison County Planning Board recommended conditional approval of Moonlight Basin's amended overall development plan, but with no increase in the total number of residential units and minus the 100 additional units in Moonlight Territory.

The county commission approved an ODP for Moonlight Basin in 2007, which allowed a maximum of 1,651 residential units. ODPs must be renewed every 10 years. When Moonlight Basin began the process with the county government last year to renew its ODP, it requested an increase of 203 residential units to 1,854. It also requested to build 100 additional units in Moonlight Territory, an important wildlife habitat and migration area. Moonlight Basin requested the expansion, even though it hasn't come close to its authorization under the 2007 ODP. “The ODP life is 10 years,” the planning board recommendation reads. “Since Moonlight began developing in the 90's, only about 25 percent of the development has gone through the approval process.”

The planning board recommendation states that Moonlight Basin's calculations in support of more residential units are arbitrary. “The 2017 Moonlight Basin ODP proposes an increase in the number of units based on converting 'pillows' into units,” the recommendation reads. “According to the application, the 2015 Comfortable Carrying Capacity of the ski resort area by SE Group was 6,170 'pillows.' Moonlight converted 'pillows' into residential (non-hotel) units and hotel units, arbitrarily using 4 'pillows' per residential (non-hotel) unit and 2 'pillows' per hotel unit to justify increasing the residential units to 1,854. This is not consistent with the definition of residential unit adopted by Madison County or the accounting used in 2007.”

“The proposed 100 units in Territory Reserves I-III reduce connectivity through the center of Moonlight to the Custer Gallatin National Forest on the north,” the planning board recommendation reads. “Clustering the 19 units formerly allocated to the Reserve Ranches or moving all of those units to a less sensitive area in the 'developed' portion of Moonlight should be considered.”