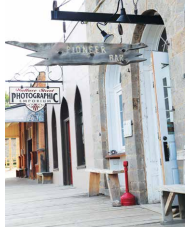 Four men – Christopher Kase, William Haley, Dalton Fish and Karson Yuan – were recently charged with felonies in relation to a July 10 assault at the Pioneer Bar in Virginia City which left one man with injuries so severe facial reconstructive surgery was required. Two other individuals related to the victim were also injured in the fray.

The victim, Cody Monaghan, detailed the violent altercation in an interview with The Madisonian in August. He described an evening with his visiting family, attending the Brewery Follies in Virginia City before dropping into the Pioneer Bar ahead of a ghost tour. Not long after the group arrived, they caught the attention of several individuals connected with the nearby Heroes and Horses nonprofit, an organization focused on the rehabilitation of veterans which had recently relocated to the area.

Monaghan stated that the situation, which started with someone from Heroes taking his brother’s sunglasses, escalated quickly with an initial tussle inside moving to the boardwalk outside the bar where his wife and brother were also assaulted before he took the brunt of the attack in the form of a chokehold which took him to the ground where he was brutally kicked in the head before losing consciousness.

Madison County District Court charging documents filed Sept. 22 officially detail the incident. The sheriff’s office received the call regarding the bar fight at 10:45 p.m. According to the reporting party the suspects had left the scene in a silver flatbed truck. MCSO Sergeant Alec Winn and Deputy Austin Marsh responded.

While en route the officers observed a truck matching the suspects’ description and pulled the truck over. The two occupants stated they were not involved. Around that time dispatch notified the officers that another truck which had recently left the scene may be involved.

That truck was also located and pulled over. The two occupants, which included Chase, stated they had seen the fight but had not been involved and did not know who was. The men were eventually let go.

Upon arrival to the Pioneer Bar the officers located a man, Monaghan, lying on the boardwalk nearby. Ruby Valley EMS was on scene where a large amount of blood was observed. The reporting party stated the pools of blood were Monaghan’s. He was soon placed into an ambulance and taken to the hospital.

Further witness interviews were performed, painting a scene that began, according to Monaghan’s brother, when one of the assailants took off his sunglasses, throwing them to the ground and starting a fight. Both parties went outside where the fight continued. Monaghan’s wife, during an attempt to stop the fight, was thrown to the ground.

One witness described the assault on Monaghan as “five on one, until everybody jumped into stop it,” with the assailants described as “cowboys,” wearing cowboy hats and Wrangler jeans.

On July 11 MCSO deputies paid a visit to Heroes and Horses in Nevada City. There they gathered more information on the incident from a witness who stated he was not involved but did drive the men who were involved back to the Heroes property. Another Heroes witness who stated he was not involved in the attack said that “tourist” guys had gotten out of hand and one had been “running his mouth.”

The other men involved in the incident were camping about a mile away. Deputies visited with Kase, observing blood on his right boot and clothing, though he stated it was not blood and that he had not seen anyone getting kicked or done any kicking himself.

Yuan was next in line for questioning. Yuan stated a woman started the pushing and shoving that escalated into the assault, and that the Heroes group had tried to break up the fight before the bartender eventually did so. The Heroes group, said Yuan, started to leave, but they were confronted outside where they were “blindsided,” and that he was not involved. Blood was also observed on Yuan’s right boot as well as a bump on his head.

Fish was next for questioning. What started as going out for a burger and fries, said Fish, turned into more than that. He acknowledged being part of the fight, getting and giving a few “licks.” Officers identified blood on Fish’s pant leg; he said he did not know how it got there but that he had been in “much worse situations” than the bar fight.

The last interview was with Haley. He acknowledged being present for the fight, but stated he was not part of the group who assaulted Monaghan while he was on the ground and did not touch any of the females involved. Officers noted what appeared to be fresh scrapes on Haley’s knees, a bleeding scab in his shin, swelling and bruising around his right eye and what appeared to be drops of blood on his left shoe.

Subsequent follow up with Monaghan, his wife and brother further emphasized the brutality of the assault. Monaghan had five to seven fractures around his eye, his septum was broken and a metal plate was required on the right side of his face to repair the damages. His wife, along with a concussion, was diagnosed with multiple elbow fractures as well as PTSD resulting from the incident. His brother suffered injuries to his ear.

Many witness interviews, a review of video surveillance footage from the bar and a photo lineup were used by law enforcement officials to decipher what had occurred and determine who was responsible for the injuries sustained by the Monaghans.

Yuan was charged with accountability to aggravated assault, a felony.

Kase’s initial Madison County court appearance is set for Oct. 25, Haley’s is Nov. 1 and Fish and Yuan’s is Nov. 8.