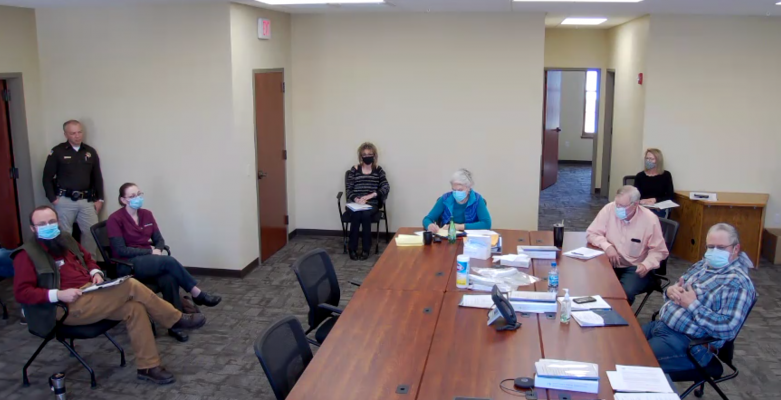 The Madison County Board of Commissioners’ meeting last Tuesday was the setting for a relatively heated discussion regarding the county public health department’s use of funding from the federal government and employee timesheets.

“This is a slap in the face to the other employees who are also making sacrifices. It’s a slap in the face to taxpayers who are barely making ends meet,” Tawyna Clark read from a letter she wrote to the commissioners that blamed Melissa Brummell, Madison County public health nurse, and Bonnie O’Neill, Madison County public information officer, for illegally distributing funds.

“Once that opened up, I thought it would be a great way to recognize those for their public health response to COVID-19. Prior to pushing it forward to the commissioners to ask for approval, I emailed state Department of Public Health and Human Services (DPHHS) to see if that was an allowable expense—to do a hazard stipend pay for the incident management team, public health and the sanitarian office,” Brummell said.

On Nov. 2, DPHHS responded to Brummell’s inquiry validating that the stipend was an appropriate use of this money. After commissioners approved Brummell’s request, it was applied for, received and distributed to 17 county employees in the sanitarian office, the incident management team and the public health department. Two employees chose to not accept the funding.

On Dec. 17, Brummell received another email from DPHHS recanting the original statement.

“Our idea was to support the people that were involved in the battle and I don’t know if you attribute it to bad information or misinformation, but it obviously didn’t turn out the way we intended it to,” Commissioner Ron Nye said.

The incident management team is activated when instances of public health or community concern arise—pandemics, wildfires or water quality issues etc. As the coronavirus pandemic was a public health emergency, Brummell, a registered nurse (RN), was made head of the team.

Stipends were prorated for those on the incident team depending on what duration of the pandemic they worked. Brummell explained that if a team member, or county employee dealing with Covid-related tasks, worked for ten months during the pandemic, they received about $3,000.

“During this whole incident of response, on top of doing all their other duties, they’ve had to take on these other really large duties, along with being expected to continue keeping their offices going and the basic services without any additional pay,” Brummell said.

“I think it was an appropriate thing. Public health departments were losing employees throughout the state and our rationale was we just need to keep these guys around. Money doesn’t fix everything, but if this will help, great,” Commissioner Hart said.

Brummell worked with commissioners, county finance and the Montana Association of Counties (MACo) to find a solution. Commissioner Hart explained that revenue generated in the health department might be the best route to follow to fix the problem, attributing the stipends to revenue instead of coronavirus relief. A resolution regarding this decision was scheduled to be read on Tuesday, March 9 during the commissioners’ meeting.

At the end of grant cycles, MCPHD must explain how funding has been used and where money came from. In the final reimbursement paperwork submitted at the end of 2020, MCPHD did not attribute the stipends to the coronavirus relief fund due to the conflicting information received from DPHHS.

“We didn’t want to risk misusing funds, even though we had that initial approval, and risk the other grant funding that we get into the county,” Brummell said. Madison County receives funding from various entities—public health grants, Department of Emergency Services (DES) grants and airport grants as examples.

“My suspicion is, had I not started emailing and making requests, this would have never been brought to the public’s attention,” Lisa Stapp, deputy treasurer for the county, said, noting that during a prior public meeting, it was stated stipend money would be taken out of CARES Act funding, not general expenses.

“If you’re looking at this from a taxpayer perspective, people’s businesses were shut down,” Clark said. “They weren’t allowed to operate at all for a while. They were only able to operate at certain capacity. Melissa definitely wanted law enforcement to try and enforce that upon people—mask wearing, all kinds of things. And it just looks really, really bad, even if it were legal, that they get to line their pockets while nobody else can run their business.”

The commissioners maintained that they did not view the handling of the stipend allocation as illegal.

Regarding some community members’ concerns about her overtime, Brummell explained that she reports her hours to the commissioners and O’Neill.

Public health was designed as a Monday-Friday, 8 a.m.-5 p.m. job, she said, and the pandemic threw all of that to the wind. Not only did the department move to a seven-day work week, but it was not fully staffed through the pandemic.

“Public health, for the last year, has been chronically understaffed, especially in the nursing department, and so to be able to provide the services and the prevention to our residents during this pandemic to the quality that needed to be provided, I had to pick up additional hours to be able to provide such services,” Brummell said.

MCPHD was able to acquire a 90-day temporary contact tracer during the pandemic. The department was fully staffed for the past two and a half months. Before, there were gaps when Brummell was the only RN inside MCPHD. Ideally, the department would have two RNs in a non-pandemic year.

“When I looked into the timesheets, it appears to me that Melissa has been paid correctly based on how she filled out her timesheets,” Madison County Sheriff Phil Fortner chimed in. “The six months that I looked at, actually, it looks like the county probably owes her a few hours. The problem there is for as long as I’ve worked here, we’ve always had to be accountable for our overtime. If Melissa has been completing her timesheet for this many years like that and she was never told to correct that…it’s not all her fault.”

Not all county departments follow the same guidelines for filling out timesheets and documenting overtime. O’Neill mentioned there has been discussion on moving towards an automated timeclock system.

“Melissa had many hats she was wearing initially, and her timecard reflected that. I might also add that the county has, I’m not sure how many departments within Madison County, (and) none of the timesheets are done the same,” O’Neill said.

“I think taxpayers just want to know where their money is going,” Clark said towards the end of the almost hour-long discussion. Commissioner Hart assured her when the commissioners decide what line item the stipend will be attributed to, it will be on the commissioners’ agenda.

During the March 2 commissioners’ meeting the commissioners accepted Brummell’s resignation. Her last day was March 8.

Public health, like many other elements of a community, must be supported in order to survive.

“In my tenure with the county, Melissa has been nothing but an unbelievable all-star and I think she has the highest integrity and work ethic,” Steve McNeece, Madison County Nursing Homes Administrator, said. O’Neill and Vicki Tilstra, chief financial officer, echoed these sentiments.

“Melissa is just outstanding,” Tilstra said. O’Neill added that Brummell went ‘above and beyond the call of duty’ and answered her calls or texts at any hour of the day.

“People are angry right now, all over the country. Not only angry, (they) are mean,” Commissioner Hart said. “The thing on Jan. 6 was an example. They’re angry and some of them are mean and we have some of that in Madison County.”

“I still believe, however, people are good,” he finished.