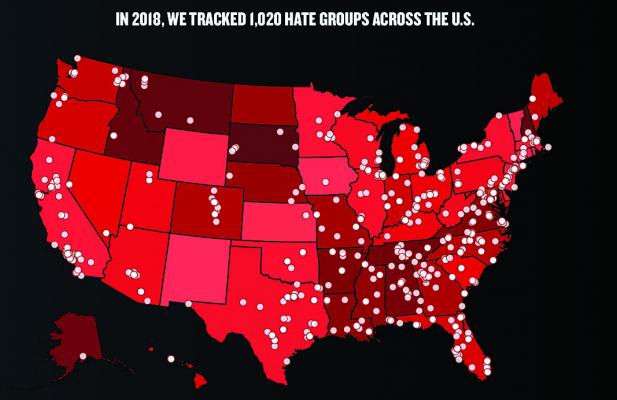 MONTANA – For nearly two decades, the “Hate Map” project for the Alabama-based Southern Poverty Law Center has tracked hate groups across the nation, championing lawsuits that combat institutional racism and other forms of inequality, such as homophobia, white nationalism and anti-immigrant leanings.

The SPLC also heads up the Intelligence Project, which draws attention to the activities of hate groups, and the Teaching Tolerance program, which distributes anti-bias materials and curriculum to schools nationwide, including documentaries, books and lesson plans that seek to embrace diversity and difference rather than demonizing them.

The state with the highest number of hate groups was California with 83, but it wasn’t the highest per capita ratio. That designation concentrated mostly on the deep south in states like Alabama, Louisiana and Mississippi, and the rural west, with Montana and South Dakota taking some of the top spots by virtue of their small populations. Both states had seven active groups tracked in 2018.

Many of the groups on the Hate Map are nationwide organizations with multiple branches spanning half the country or more. White nationalist groups The Right Stuff and Identity Evropa have more than 25 branches each, while the Nation of Islam, classified as a black nationalist group, has 28 and the Neo-Nazi Atomwaffen Division has 27. The Ku Klux Klan still has 51 active branches, according to the map.

But the well-known forms of hate are not the only ones the SPLC keeps an eye on. They divide groups into 15 categories, everything from Hate Music, largely identified as white power labels who record and distribute racist material, to holocaust denial groups and Christian identity groups, which often espouse anti-Semitic and racist feelings and which the SPLC calls “Christian in name only.”

When the SPLC first began tracking hate groups nationwide, there were four active groups in Montana that claimed spaces on the map. Following the national trend, that number increased until reaching a high point around 2010, when the SPLC cited 13 hate groups. In 2018, that number had fallen slightly from recent years, coming to rest at seven.

One of those seven is Identity Evropa, one of the most widespread hate groups in America. In recent months, the white nationalist group – which had a hand in the 2017 “Unite the Right” rally in Charlottesville, North Carolina, which resulted in three deaths – has brought some of its most common tactics to both Missoula and Bozeman.

The group often distributes fliers and other materials on college campuses and has done so at both the University of Montana and Montana State University this year. Fliers appeared on the UM campus back in November, and just a few weeks ago, an Identity Evropa sticker was found in Bozeman on the MSU campus, leading to the investigation of a ROTC cadet who was allegedly found to have ties to the organization.

Other groups tracked by the SPLC in Montana included ACT for America and Last Chance Patriots, both anti-Muslim groups, and white nationalist groups Pioneer Little Europe, based near Kalispell, and the American Freedom Party, which has been tracked across the state.

One of the most cited reasons for recent surges in hate groups—2018 was the fourth year in a row of the steady increase—is the rhetoric and views of President Trump’s administration. Many believe that progenitors of hate speech feel able to speak more freely since Trump’s campaign and election in 2016.

“The numbers tell a striking story—that this president is not simply a polarizing figure but a radicalizing one,” said Intelligence Project Director Heidi Beirich in a February statement. “Rather than trying to tamp down hate, as presidents of both parties have done, President Trump elevates it—with both his rhetoric and his policies. In doing so, he’s given people across America the go-ahead to act on their worst instincts.”

White nationalist groups in particular saw one of the most significant increases in 2018, and the SPLC says that’s not surprising, calling them “electrified by Trump’s presidency.” Those groups shot from 100 in 2017 to 148 in 2018, a 48 percent increase. However, black nationalist groups, which often adhere to anti-Semitic and anti-LGBT rhetoric, also saw significant growth of 13 percent, from 233 chapters in 2017 to 264 in 2018.

The full hate map, along with data, resources and publications from the SPLC, can be found online at splcenter.org/hate-map.