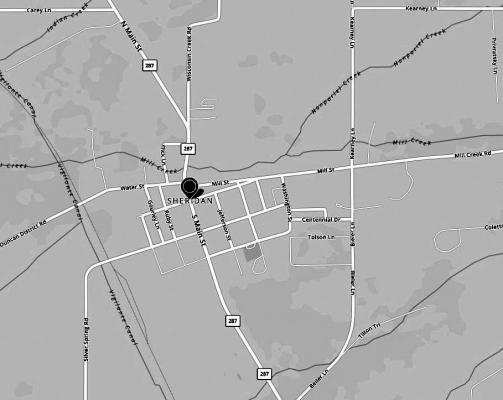 Sheridan - Sheridan’s town council considered a potential new subdivision for the town and approved hiring help to do the town’s accounting bookwork at its Tuesday, November 13 meeting.

Todd Dahlman approached council with an idea for a subdivision he’d like to begin working on.

Dahlman explained that he’d purchased 5.27 acres of land on 6B Tolson Lane, on the southeast corner of town.

Dahlman said he was looking to build a home for himself on this ground and divide the 5.27 acres into seven total lots: six 135-foot-long lots, and he would keep a 150-foot long parcel for himself in the middle of this.  He said he intended to either build homes on the rest of the lots, or simply sell the lots for a profit. He told council his aim was to put quality homes on these lots, nothing slapdash. He said if he built the homes, he would build something families could “move into, raise their kids there, and retire in 40 years.”

To get around any potential problems – he called them “heartaches” – before he began this effort, Dahlman said he wanted to talk to the council, communicate his plans, get their input.

One potential problem, he noted was that the land across Tolson Lane from where he wanted to build was on county land, not town lands, and has covenants restricting certain things.

Another question he had was water, electric, utility, and sewer line hookups. Dahlman wanted to connect to the town’s water and sewer lines and wondered what this would take on his end.

Mayor Bob Stump said he’d only heard one concern about the proposed development, which had been approved by the county’s planning board, from a neighbor nearby. The neighbor didn’t want high-density “affordable housing” going into the location.

Councilman Dan Durham said he liked the general idea of the project, said it “awesome” to see the interest in developing the area, and he hoped the council could do what it could to help Dahlman.

Stump wondered if Dahlman would be interested in annexing the development into the town. Dahlman said he didn’t have enough information at present to do this.

Stump told him that since there was only one landowner, all it would take would be Dahlman’s say-so, and that the town had done this in the past.

Dahlman said he didn’t want septic systems or wells on the development, and since he would want to hook into with the town’s sewer system, this was possible.

The council and Dahlman then discussed what hooking into the sewer system would cost.

Typically, Stump noted, a community and a potential developer negotiate who pays for what in order to annex.

Public Works Director Curt Green and Stump concluded that it would take about $80,000 to install 900 feet or sewer line and three mains at about $3,500 each, then bring the land disrupted by this back to its previous state. The mains the town would own, the cost of the installation would be Dahlman’s responsibility.

Dahlman said he could do the sewer lines for far less than $80,000; that he had previous experience as a surveyor – although he was not a licensed surveyor – and builder. If the town would buy the materials, he would do the work. He figured about $5,000 tops for materials and another $3,000 for the groundwork.

The council agreed to gather up a proper estimate on the engineering, design and materials involved in a sewer connection for Dahlman.

Dahlman also wanted to start working on a garage on the land immediately, so he could begin the move from Utah to Sheridan. Council said there was no zoning involved, and simply urged Dahlman to oblige by the town’s 5-foot setback rule. Dahlman said he intended on going one step further, 10 feet so any drainage would run on his own ground, not a neighbors. He also intended to comply with International Building Code (IBC) requirements for any construction, not build things out of “toothpicks and pallets,” and comply with existing covenants in the town.

Durham and Sayler put forth a motion to pursue the engineering cost estimate for a sewer connection to support Dahlman’s ideas, and this was approved unanimously.

The council also approved hiring Heidi Geim with Paigeville Accounting Services to help with town bookwork, at a fee not to exceed $5,000 for 70 hours worth of work.

Geim, Town Clerk Ginger Galiger, told the council, had been an enormous help working with getting the town’s Black Mountain municipal accounting software in order.

Town attorney Stephanie Kruer told the council to make sure their engagement letter for this covered insurance for any mistakes made from recommendations made that could cost the town money.

• Stump told council that getting things lined up for the new town well was “so close he could almost taste it.” He was waiting for a signoff of the closing instrument from USDA Rural Development. After this, the actual work could begin – bids for digging the well would go out, and Stump hoped to actually be drilling the new well by January.

• Stump also updated the council on the carcass composting proposal the council heard in October. Stump said Twin Bridges was still the Conservation District’s first choice for the location of this because all of the facilities were in place and ready. The only hitch in that get-along was concerns about birds using the composting area, located near the airport. There was talk, Stump said, of constructing a three-stall garage type building over the composting facility, to keep the birds out. Stump said he hoped to hear soon about this proposal.