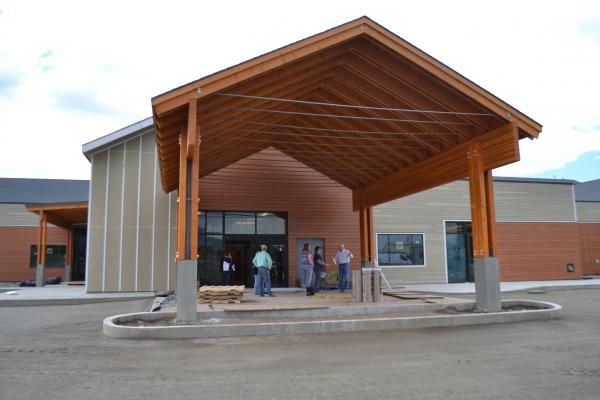 SHERIDAN - An undertaking that began in March of 2017 in Sheridan should be finished and open by the end of the summer.

The new Ruby Valley Hospital and Medical Center is quickly nearing its completion, and staff toured their new facility on Friday, June 21.

The current home of the emergency room at Ruby Valley Medical center was built in 1964, with the clinic and geriatric wing added on in 1978. Together, that facility encompasses about 17,000 square feet, while the new digs will be close to 30,000 square feet. With the new facility, providing medical services to the residents of the Ruby Valley will be a whole lot easier for staff and patients alike.

Ruby Valley Hospital currently has seven emergency room beds. Those beds have no built-in oxygen or suction systems, which instead have to be provided in external tanks and replaced periodically. In the new center, each patient room is equipped with state-of-the-art beds that allow for easier adjustment, facilitate in-bed patient weighing and feature built-in oxygen and suction. There are three ER trauma rooms as opposed to the single room in the old hospital, and a physical therapy wing four times the size of the one staff currently utilizes.

Right now, RVH staff use a meeting room filled with $90,000 worth of equipment waiting to be unpacked and unloaded into the new facility. There’s a single couch and a variety of desk chairs crammed into a room about the size of a one-person office. The meeting room in the new hospital will be a large conference-style room, with automated presentation screens and enough seating to comfortably accommodate twenty or more people. CEO John Semingson says it will likely be available for community use as well.

The new hospital in Sheridan has been an idea since 2008, not long after Semingson arrived as CEO. Ruby Valley Hospital received a $15,000 grant to fund a preliminary site plan, and the main decision that had to be made was whether to remodel and expand the current site or start over and build an entirely new one.

“What we had to decide was, over time, what could we do and what couldn’t we do,” Semingson recalls. “And when we cranked some numbers, it was less expensive to build a new facility. And we wouldn’t have been able to achieve what we wanted to by just remodeling the one we have.”

In fact, it would have cost over half a million dollars more to expand and remodel the old facility than to build an entire new one, and would have taken up to twice as long. The new option also offered an opportunity to do some much-needed upgrades to generators, laundry facilities, Internet servers and insulation. Storage space will be increased and the hospital, which is currently operating at about the highest capacity it can accommodate, will have the space and resources to provide care for a greater number of patients with more comfort and more efficiency.

During the facility tour, nurses commented that it will be the little things that save them so much time in the new hospital and will allow them to better care for their patients. Things like not having to go from one end of the hospital to the other to get ice for a patient, and not having to take them to an entirely different building if they need a CT scan; the new radiation lab takes less than 30 seconds to get to from the patient rooms. The new building is entirely air-conditioned, something that can’t be said for the hospital’s current digs. There will be a new helipad for airlifted patients, an outdoor area for patients in physical therapy and a garden with a fountain where family and patients can relax and enjoy the hospital’s view of the mountains.

The Ruby Valley Health Care Foundation has raised over $4 million for the project over its decade-long span. But, Semingson says, it’s also been a critically community-supported endeavor, and the Ruby Valley’s 2,200 people will reap the benefits, from Silver Star to Virginia City and everywhere in between.

The Foundation will likely be the ultimate recipient of the original hospital space as well. Sheridan’s senior center, which is currently housed in a less-than-accessible two-story house, may move into the ADA-equipped clinic wing, so the community will still benefit from the old facilities as well.

“The community and others have been very generous with their donations,” Semingson says. “We couldn’t have done this without them.”

“Because ultimately, it’s not our hospital. The residents of the Ruby Valley, it’s their hospital. It belongs to them.”