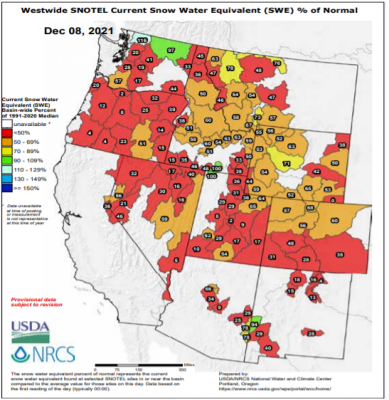 Is this the new normal for winter?

While it feels weirdly like fall at lower elevations in southwestern Montana, winter is beginning to hit in the high country. According to Gallatin National Forest Avalanche Center (GNFAC), seven inches of new snow fell Monday to Tuesday night in the Bridger Range, Big Sky area, and Cooke City. “The snow that fell yesterday was a welcome relief; every little bit helps,” wrote GNFAC Director Doug Chabot.

GNFAC avalanche forecasters Dave Zinn and Alex Marienthal recently skinned up to Flanders Mountain near Hyalite Canyon on Dec. 4 to install the weather station and checkout local backcountry conditions in the Madison Range. They started off their ski with dirt trails more suited to hiking conditions but eventually hit snow.

On Monday, Dec. 6, forecaster Zinn headed up to Beehive Basin to check out the conditions and snowpack coverage at 9,000 feet. “I’m up at Beehive Basin. We just walked in and decided to leave the skis in the car today. What we wanted to see was what the early season snowpack was looking like and what coverage was looking like. As you can see... it’s pretty variable,” said Zinn. The Basin had little snow coverage and lots of grass and exposed rock. “Early season conditions do exist,” said Zinn.

Across Gallatin County, Old Man Winter has been slow coming this year, but it isn’t out of the ordinary anymore. Ian Hoyer, another avalanche forecaster for GNFAC, explained every year is turning out a bit different. “There just isn’t a normal. A normal start isn’t a thing... I was wearing a t-shirt on Thanksgiving and that was a bit odd,” Hoyer said.

The Friends of GNFAC, an affiliate of the avalanche center that raises funds and promotes educational classes on safe backcountry snow travel, recently had to cancel their Dec. 4 field day due to lack of snow for class. Bridger Bowl, too, is dealing with similar problems. They originally planned for opening day on Dec. 4, then Dec. 10, and now it looks like Dec. 17. “Due to a severe lack of snow and conditions that are not safe, Bridger will delay opening. We will reevaluate early next week in hopes for a Dec. 17 opening... Waiting on Old Man Winter!” wrote Bridger Bowl on their website.

Last year, unstable conditions characterized backcountry recreation in the Bridger and Madison Ranges. “From late Oct. through Nov., the mountains received two to four feet of snow followed by mostly dry and cold weather through mid-December. This long dry period of high pressure caused the early season snow to become faceted, sugary, and weak, and unable to support the weight of future storms,” explained GNFAC in their annual 2020-2021 report.

The conditions in the mountains feel different this year due to lack of snow and warmer temperatures but the conditions for avalanches sound similar. “The higher you climb the more snow there is. The difference between low and high elevations is stark, and so is the avalanche potential. On slopes that hold early season snow there is a layered snowpack. Some of these layers are getting weak as sugary, faceted snow develops. Wind-loaded slopes and gullies are cracking and avalanching,” wrote Chabot on the GNFAC Dec. 9 snowpack report.

In the western United States, where snowmelt provides 75% of the water supply according to the U.S. Geological Survey, variable snowpack has implications for not only outdoor recreation, but also the seasonality of winter, fish spawning and wildfire season.

According to U.S. Drought Monitoring data, a large portion of Montana is currently in exceptional, extreme, or severe drought conditions. Gallatin County is experiencing both stage two severe drought and stage three extreme drought as of Nov. 30. 2021.

“In a warming climate, more precipitation will be expected to fall as rain rather than snow in most areas—reducing the extent and depth of snowpack. Longterm observations across the contiguous 48 states show that nearly 80% of weather stations examined have experienced a decrease in the proportion of precipitation falling as snow. In addition, with warmer winters and springs, the seasonality of snowpack is also changing. Higher temperatures cause snow to melt earlier, which in turn affects the timing and availability of water,” writes the U.S. Environmental Protection Agency on their website.

Although GNFAC prefers not to comment on long term trends, they are collecting snowpack data at weather stations across their 1,720 mi2 (about the area of Rhode Island) territory. Their forecasters have described seeing lots of precipitation fall as rain. “It’s not sticking around at lower elevations,” said Hoyer, “The flip side of warmer temperatures is the snowpack hasn’t [sic], with cold temps, usually weaken the snowpack. With it being a bit warmer, it may be a bit of a stronger foundation than last year.”

Once again, be safe out there as weather conditions in the mountains change frequently. New snow is in the forecast for Big Sky on Tuesday, Dec. 14, and again next Friday. Temperatures are expected to top out in the high30s this week with a low of 12° F expected. Come on winter!