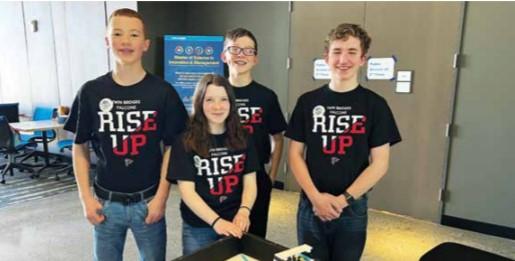 When the Falcon Fire team from Twin Bridges visited Montana State University last Saturday, it marked the culmination of nearly five months of building and programming a robot the junior high students pitted against 35 other teams from around the state.

At the annual FIRST Lego League finals tournament, the four team members unleashed their transportation-themed creation on a pool table-sized arena and hope that it completes the pre-assigned missions, such as unloading and moving pieces of cargo, that they've spent hours practicing. The team was also evaluated on their presentation to a panel of judges and their spirit of teamwork.

"I love to see the students get excited when something they’ve worked on for weeks and weeks finally comes together,” said coach Jenifer Elser, who teaches math and science at the Twin Bridges Junior High School. “Their perseverance pays off and there are smiles all around.”

Elser started the program at the school about four years ago during an expansion of the science, technology, engineering and math, or STEM, curriculum as a way to offer students another after-school activity besides sports and 4-H. "It's a great way for them to practice real-life applications of what they learn in the classroom," said Elser, who volunteers her time for the program. The school provides transportation and computers, but the team raises money to purchase the Lego robotics kits.

"I like the hands-on aspect of it," said Cash Raben, an eighth grader. “It’s a fun way to hang out with your friends,” including teammates Faith Huss, also in eighth grade, and seventh grader Flint Janzen.

Brayden Pettigrew, in eighth grade, said he most enjoyed building the robot from advanced Lego pieces and programming it using a basic coding language that introduces students to computer science. "It makes you learn how to problem-solve,” he said.

Last year's tournament was held remotely because of COVID-19 precautions, so this is the first time the Twin Bridges students have journeyed to MSU’s Inspiration Hall for the event. MSU has been involved with the Montana chapter of For Inspiration and Recognition of Science and Technology, or FIRST, since 2007, initially through the Montana Space Grant Consortium and now organizing the tournament through MSU’s Norm Asbjornson College of Engineering. FIRST is an international organization that aims to inspire young people's interest in STEM fields.

“We love that it’s an opportunity for teams to gather and show off their hard work,” said Loribeth Evertz, outreach coordinator for the engineering college and assistant teaching professor in the Department of Mechanical and Industrial Engineering. “Kids from all over the state come here and get a glimpse, in a really supportive and fun environment, of what engineering can be like.”

Besides teams from Billings, Missoula, Helena and Kalispell, many schools from small Montana towns participate, including from Fort Benton, Drummond, Eureka and Ronan. The 36 teams slated to compete in Saturday’s tournament were selected from 52 teams statewide that entered into the qualifying round held remotely in January.

For Elser, it's fulfilling to watch the team grow their skills and teamwork in the course of meeting each Monday after school, but it can be a challenge to not jump in and take part in the fun herself. "I try and be as hands-off as possible, which is the hardest part," she said. "They get the greater reward by problem-solving on their own."