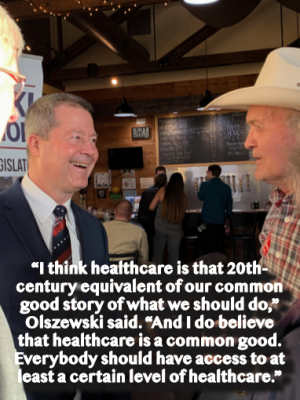 A bright blue bus with the Republican State Legislature from Kalispell, Sen. Al Olszewski, painted on was the first indicator that “Doc” was in town.

Olszewski is one of three Republicans running for the governor’s office in the 2020 elections. He held a a meet and greet at the Beaverhead Brewery in Dillon Feb. 26. Olszewski plans to make a visit to Madison County in April.

Olszewski was elected to represent Kalispell’s district as a sena- tor, after serving two terms in Montana’s house of representatives. He is from Great Falls and served in the Air Force as an orthopedic surgeon. He retains his practicing license, as a consultant, while
on the campaign trail. Olszewski is the only practicing doctor in the Montana Legislature. Most of the bills he has sponsored have involved healthcare.

His run for governor is a result of his dissatisfaction of agencies overstepping the process of law.

“The last two administrations have allowed a culture of the agencies pretty much can do what they want,” Olszewski said. “And instead of serving, they get to determine how they serve us. So, what I believe is that we need a governor that’s going to reign in our agencies, so they actually follow the law and not interpret them in a way that’s to their benefit.”

Olszewski stepped in the political arena as he saw healthcare become more unaffordable for his patients.

“If we want to make healthcare affordable, the first thing we need to do is make sure that everybody pays the actual cost of healthcare, Olszewski said. “That means the first people up is our government has to pay it.” Most healthcare providers receive below cost for the services they provide for Medicare and Medicaid. Olszewski explained how healthcare costs are shifted on to patients when the government does not pay in full. Critical Access Hospitals, such as in Madison County, are refunded in total due to their venerability with low volumes in the rural communities they service.

Olszewski also has a tax credit program in mind for people who pay for healthcare. The tax credit would refund people’s healthcare premium to the level of their premium or what they would pay as a healthy adult in Medicaid Expansion, which according to Olszewski, is $9,000 a year per person.

Olszewski wants to change the argument around whether healthcare is a right or a privilege. He said that it’s neither, it’s a service and compared it to access to electricity.

“I think healthcare is that 20th-century equivalent of our common good story of what we should do,” Olszwski said. “And I do believe that healthcare is a common good. Everybody should have access to at least a certain level of healthcare.”

Olszewski thinks that construction regulations and zoning issues that are a part of the affordable housing problem should be dealt with on the county and city level.

According to Olszewski, the Montana Environmental Protection Act is denying subdivision development.

Olszewski spoke on the unintended consequences of telling builders how to build and Airbnbs driving up housing costs and availability in communities. He also discussed about providing the locals with what they want. In Whitefish, city greenspace has sometimes trumped housing needs.

“It is a democracy and if the people of Whitefish don’t want it and they voted regulations to prevent it, should the state be oppressive and tell them no? The answer to that is no.”

Olszewski believes that no one is entitled to their hometown.

“If you’re having a hard time finding a place to live and you can’t get your wage to meet with that, maybe it’s time to look at other parts of Montana,” Olszewski said. “Just because you’re from one certain spot or place doesn’t mean that you get to live there forever. If you could, great.”

Several hunters in the Gravelly Mountains were attacked by grizzly bears in the 2019 hunting season. The nature of hunting – quietly stocking wildlife— makes it more likely to come in contact with a grizzly bear.

Olszewski was a biologist before he was an orthopedic surgeon. He worried that grizzly bears have become too comfortable around people, associating hunters’ gun shots as a free meal.

“We need to delist the grizzly,” Olszewski said. “And our current grizzly population needs to be trained to stay away from humans. We need to be a negative stimulus to them, and that includes hunt- ing. So, a limited hunting of the grizzly bear along with the black bear.”

He specified that management hunts should only be in the areas where they have recovered. It is illegal to hunt grizzly bears in the national parks.

“We would have that conversation with our Native American Tribes if on their reservations and reserved lands, they do not want hunting on the grizzly bear, that’s fine,” Olszewski said.

Olszewski has hiked, hunted and fished the Little Bell Moun- tains, Highwood Mountains and along the Missouri River all his life. “For me public lands mean access,” Olszewski said. “For men and women and families to recreate. We need make sure we have multiple use throughout our public lands.”

Olszewski understands the many uses for public lands and the foraging rights ranchers can have on lands. He would like the government “entice” ranchers with a negotiated price tag for public access in foraging areas. It is the public’s responsibility to respect the access.

“We want to make sure that people who access it, do so with good stewardship,” Olszewski said. “If you’re going to a steward and want access to these lands, they belong to all of us.”