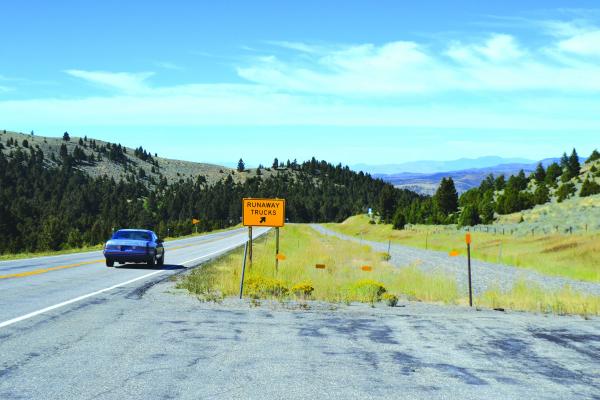 Tuesday’s meeting was called for by Montana Heritage Commission executive director Elijah Allen in response to the dump truck crash that occurred on the west end of Virginia City.

That truck had lost air pressure to its brakes and been unable to stop, passing through Virginia City along Wallace Street and narrowly avoiding crashing into parked cars and a number of pedestrians along the main thoroughfare.

“When that truck went past my office, it had to have been going 100 miles per hour,” Allen told the commissioners. “I’m just stunned…I think there are a lot of things we could mitigate.”

One such option, Allen said, would be for the county to consider adding another runaway truck ramp on the Virginia City hill. The truck that crashed on August 23 lost its brakes after it had already passed the runaway truck ramp near the top of the hill.

Montana Department of Transportation (DOT) district administrator Jeff Ebert joined the commission at its meeting on Tuesday to discuss other potential options.

Ebert noted that the DOT had pulled data on the number of serious crashes Virginia City has seen in the past decade, and that three of those had involved animals, two had been side-swiped vehicles and one had been a fixed-object collision. He said this was the first reported to the DOT that involved a commercial vehicle.

However, Ebert also said that when crashes do not involve a law enforcement response, they do not get formally reported to the DOT, so it’s possible those numbers were lower than the actual number of incidents. Roger Williams with the Virginia City Fire Department agreed.

“We’ve had multiple runaways that haven’t gotten reported and haven’t caused an accident,” Williams said. “Almost every fire meeting, we’re wringing our hands over what we’d do if a runaway truck hit a propane truck or, God forbid, a storefront.”

Allen also mentioned other options, like the installation of rumble strips as vehicles enter and exit Virginia City, adding a crosswalk somewhere along Wallace Street or adding more signage near the top of the 3-mile, 7 percent grade leading into town to warn drivers of what’s ahead.

However, Ebert said, studies have shown that the more signage there is in a given area, the less drivers tend to actually pay attention to it. Atop the Virginia City there are already signs advising the grade of the hill, the curves and the speed limit, which quickly drops from 70 miles per hour to 45, then 35 and 25 as drivers drop into down.

To begin the process, Ebert said, the DOT would begin by conducting traffic and pedestrian counts, which could begin as early as this fall.

Once that data is collected, the DOT could consider looking into purchasing a plot east of town for another runaway truck ramp or adding flashing signs or rumble strips similar to those that notify drivers of potentially sharp or unexpected turns on Highway 84 between Norris and Bozeman.

Allen also presented the option of exploring whether the Montana Heritage Commission, which is a state entity, could gift some land in order to create a second runaway truck ramp.

He estimated that nearly half a million people visited Virginia City and Nevada City this summer, and noted the importance of ensuring that drivers coming over the hill know exactly what they’re about to drive into.

The DOT has a highway safety improvement sector that focuses on specific locations that pose traffic dangers, and Ebert said this could be an ideal case in which to utilize those resources. In the meantime, a multitude of potential solutions could be explored once research gets underway.

“The sooner we get the ball rolling, the better options we’ll find,” he noted.