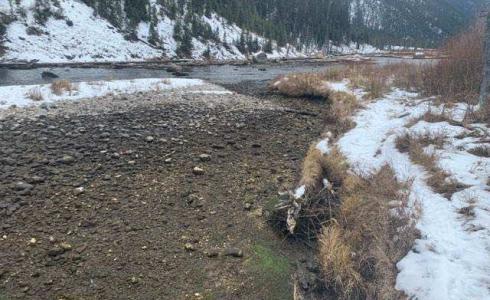 The Madison River recorded very low flows early Tuesday, Nov. 30, due to a broken gate on Hebgen Dam that controls water flow. Few, if anybody, noticed the problem until sunup. The Madison River is habitat for one of the most prized trout fisheries in Montana, some might even suggest the West, and a substantial amount of people depend on it for their livelihood. Northwestern Energy crews worked hard Tuesday and Wednesday to restore flow to the vulnerable river and spawning fish.

According to Jeremy Clotfelter, the director of hydro operations at NorthWestern Energy and lead on the Hebgen Dam repair, the flows dropped Tuesday night around 2 a.m. to 3 a.m. because of a broken part. According to USGS flow charts for Nov. 30, the river dropped from about 648 CFS to 200 CFS. “The way that it failed did not allow for our onsite gate monitoring to pick up a change... It basically showed there had been no gate movement,” said Clotfelter.

John McClure, who works for Galloup’s Slide Inn near Earth “Quake” Lake, first heard about the problem on the Madison from a customer in the shop on Tuesday morning. “Basically, on the 30th, we had a bunch of people in here... One of our [longtime] customers from Gallatin Gateway was like, ‘Where’s all the water?’” McClure explained low water flows were common in the winter, but the customer pushed back. He suggested McClure go look.

McClure quickly realized something was wrong. The Madison was a third of its normal size. He immediately started calling NorthWestern Energy but could not get a hold of anyone. “It was pretty bad. All the areas by the dam were the hardest hit. We had a lot of fish stranded in little puddles and bolder fields along the lake. We tried to put as many fish back in as we could,” said McClure. “What’s really frustrating is that there’s not a hotline to call for the dam... It is really frustrating when you’re trying to call in an emergency,” explained McClure.

Because McClure could not initially reach anyone at NorthWestern Energy by phone, he started to call other outfitters in the area. Eventually he connected with Joe Moore, owner of Big Sky Anglers based out of West Yellowstone. “Johnny called me and said: ‘We’ve got a problem,’” explained Moore.

Moore started to send out messages to the Madison River Foundation, Mike Bias of Fishing Outfitters Association of Montana, and council member Brian Nielson from Montana Trout Unlimited. Another outfitter got through to NorthWestern Energy.

“That was the most frustrating part. It wasn’t really brought to [NorthWestern’s] attention really until 8.5 hours later. They claim they do have an alarm set up for this kind of situation. How hard would it be to see if there is a dramatic drop or increase via gauges set up all over the state? How can it not be set up?” wondered McClure. To NorthWestern Energy’s credit, Clotfelter explained they do have monitoring systems set up for these situations but had issues with USGS instruments in cold weather.

Photographs emerged shortly after the dam’s malfunction of dried-up channels, a variety of fish species caught in pools, and a handful of dead fish on the dry riverbed. To help fix the issue, groups of worried volunteers—made of NorthWestern employees, Montana Fish Wildlife and Parks, and members of the fly-fishing community—decided to head out to the hardest hit areas to release fish back into the main flow. The group was concerned colder temperatures overnight would put fish and spawning areas at risk of freezing in shallow water. Montana FWP worried folks trying to help could put spawning areas more at risk from foot traffic.

NorthWestern Energy, meanwhile, mobilized a response team Tuesday afternoon in a companywide all-hands-ondeck. The repair crew quickly troubleshooted and identified the issue. “The failure was underwater,” explained Coltfelter. “It’s a gate like an irrigation canal. They are really pretty simple.” It’s like a big metal square at the bottom with a stem attached to the top—it moves the gate up or down to control the flow.

The NorthWestern team decided to focus on preventing the gate from closing any further, then brought in divers, and finally ordered a new piece called a gate stand coupling. The component was manufactured in Anaconda by Anaconda Foundry Fabrication Company (AFFCO) extremely quickly. Ultimately, NorthWestern Energy restored normal flows to the Madison River just before midnight on Wednesday, Dec. 1. Over the willow banks and sun-bleached grass of the Madison River on Thursday, Dec. 2, a bald eagle flew overhead. The river appeared back to normal. A large fish kill did not occur, and most fish species were not spawning, according to a biologist for Montana FWP. Overall, the impacts on the Madison River, a lifeblood for southwestern Montana spiritually and economically, are difficult to determine

. McClure and Moore, who both depend on the river, believe the Madison dodged a bullet. “More than anything a hotline needs to be established so if there’s a problem with the dam, we can contact them. They should have an ability to get right to a red phone for emergencies only,” suggested McClure.

Moore, who has been fishing the Madison since he was six years old, thinks it could have been a lot worse. “I’m not going to say we are pissed off at an agency… I cannot be that way. That’s not in my human nature... There’s got to be a relationship with NorthWestern Energy and Montana FWP. You cannot be mad at them,” said Moore. “You read so many comments on the internet and they’re like, ‘Heads should roll.’ A part broke… [Heck], a part broke on my car last week,” said Moore.

The Hebgen Dam release gate is open and outflows to the Madison River were restored just before midnight on Wednesday, Dec. 1. Follow-up work is still required, but water in the river has reached normal levels.

NorthWestern Energy hydro engineers and personnel worked around the clock to develop a repair plan and restore gate functionality and river flows to the Madison River as quickly as possible, safely.

Anaconda Foundry Fabrication Company (AFFCO) fabricated and machined the new gate component. Their staff worked through the night Tuesday and all day Wednesday to manufacture the part, then delivered it to Hebgen Dam Wednesday evening.

“This successful repair was the culmination of outstanding effort by many NorthWestern Energy employees and partner contractors. From the time this issue was identified, work was underway without stoppage until the river flows were restored,” said Jeremy Clotfelter, director of Hydro Operations.

The repair was completed safely and without requiring any further flow reduction in the river.

NorthWestern extends our sincere gratitude for the hard work of our partner agencies through this event, and especially to all who volunteered time with the fish relocation effort on the river. It is the Montana way to see all uniting for a common cause to help the Madison River.

“It’s heartwarming to see all uniting for a common cause to help the Madison River. These efforts will surely prove beneficial for years to come,” said Clotfelter.

About 15 NorthWestern Energy employees also joined the volunteer effort that gathered at Madison Foods Wednesday morning. The staff at Madison Foods helped our volunteers to distribute water and food from Ennis to volunteers working at the river in conjunction with Montana Fish Wildlife & Parks’ efforts.

“Our focus now turns to analysis of the failure and impacts to the river and fishery. While we know what failed on the gate, we need to identify ‘how’ and ‘why’ it failed to best establish corrective actions that would prevent a similar failure in the future,” said Clotfelter.