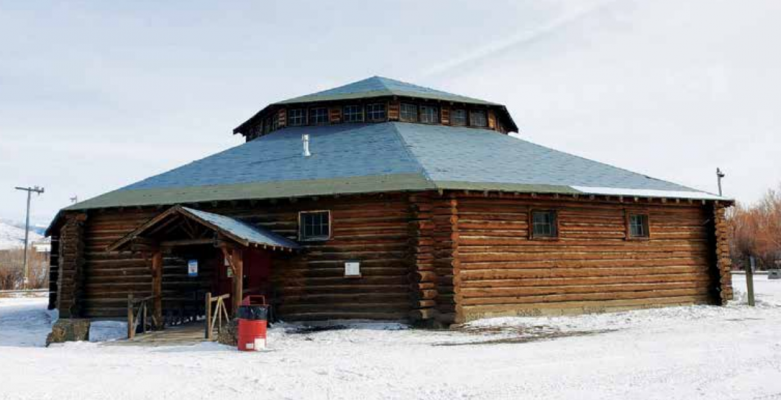 “It was at the point that we needed to do something one way or another because every time we had wind it was tearing the shingles off,” Dana Escott, Madison County fair manager, said. The pavilion sustained the worst damage.

“It gave us the opportunity to put a new roof on it with metal,” Escott explained. The metal cost a little more, but she said the county commissioners felt it was a good step for the integrity of the historic building. The red, metal roof will match the other structures in the fairgrounds.

“There is quite a history. There are five structures that are on the National Register of Historic Places out here,” Escott said. The pavilion, sheep barn, beef breeding barn, grandstands and the fair office were all built by the Works Progress Administration (WPA) in 1936.

Going back even earlier, the acreage that the fairgrounds sit on were once part of the Lott and Seidensticker homesteads. The space was designated as The Park in 1887, an early gathering space for residents of Twin Bridges. The square building next to the round building at the fairgrounds today hails from that time period. Escott said it was built in 1896 and is one of the oldest buildings in Twin Bridges.

A barbeque held in 1887 turned into the first county fair, which ran each year until 1928.

The Great Depression era left half of Madison County’s population unemployed by 1934, but in 1935 the WPA approved funding for rebuilding the unused fairgrounds buildings. Construction was completed in 1937 by locals and materials for construction—lodgepole pines and fir logs—were sourced locally.

“All the logs from these structures came from these mountains right here,” Escott said.

Escott graduated from Sheridan High School and participated in 4H growing up.

“I’m a history buff and I’ve had some great fair board members that know a lot of the history, so I just kind of take it all in,” she said. Escott feels that If you live in an area or are involved in a group with a deep history, you should take it upon yourself to know a bit more about that history.

Construction on the pavilion roof is expected to be completed next week.