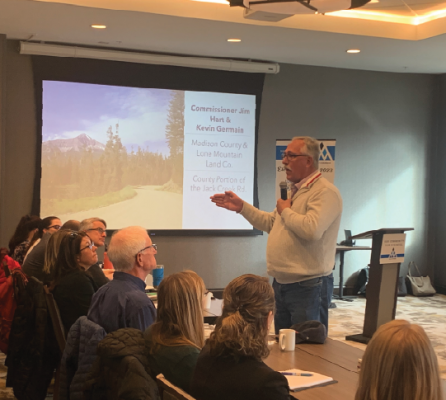 The Nov. 6 Madison and Gallatin Counties Joint Commission Meeting was to capacity – more seats had to be brought in.

The public comment period was robust, with a variety of projects and organizations represented.

As for agenda items, the most notable to Madison County was the debate of Jack Creek Road.

Madison County Commissioner Jim Hart discussed the complexities of Jack Creek Road. The majority of the road is owned by the private club, Moonlight, with a three mile stretch that is Madison County’s responsibility.

“I have worries not only about the physical viability but also the financial viability. Kevin and I and my road foreman and Chief Farhat had an opportunity to go up through there on Friday along with Great West Engineering with that map of that three mile stretch,” Hart explained. “We’re not going to get ‘er done tomorrow – and I’m sure you guys realize that. It’s a plan for a while – minimum 5 years, probably $15 million – that’s an educated guess and probably a poor educated guess.”

He asked for patience with the process, further noting a presence on the road dating back to 1929 – the family is not thrilled at the idea of changes to what they call “their road”.  He referenced the high cost of fixing a slide on the Moonlight portion of the road as a means to gauge the expense.

He said there is a decent chance the road will not be the standard 28 foot wide with a 24 foot road service.

“There really isn’t a heck of a lot of room to do that. We’ll see what we can do. I think the only way we can do it is to take it on in chunks,” he said. “That will appear initially to be bandaids, I guess. I get to work with you all and I get to work with those people who are immediately affected in that canyon, so I kind of have to do a governmental dance.”

“So, counterpoint,” vice president of Moonlight Kevin Germain quipped when he was handed the microphone. “What commissioner Hart alluded to: We had a slide on our road, actually we had two of them and at the request of the county we went ahead and spent $850,000 and $200,000 on the other this last summer to get that road up to a full 24 foot width.”

He said there is a reason Moonlight wants the road to be 24 feet wide. Moonlight, he said, has always maintained that road as open for emergencies and they want to make sure it is capable of handling emergency egress.

“But it is right now – I call it the road to nowhere because of the county’s three miles. So, I’m trying to get Commissioner Hart to think bigger and faster and let’s get that three miles fixed. There’s a lot of tax dollars going from here to Madison County that can help fund that,” he said to cheers and applause from the crowd.

Hart countered that the county has attempted to get funding from Federal Emergency Management Association (FEMA) and also applied for FLAP or Federal Lands Access Program funding. The road is not eligible for any of those funds because “they literally use that phrase that Kevin [Germain] just used – and that is, ‘It’s a road to nowhere’ because it connects to a private road.” He explained that he does not mean that in a negative way, it is simply the answer they have received when they have applied for funding. Financing is the issue, he explained.

“I understand the argument – and you guys clapped for it – I appreciate that, too,” he said and said he understands that the property taxes collected from this part of Madison county is “huge”.

One attendee asked if the road will ever be made public. Hart responded that three miles in Madison County are public, but Germain would need to answer for the rest of the road.

“We have maintained we would like to see that road gated and private, but there is a lot more traffic on that road than people in this room realize,” he said. He explained that there are many employees who live in Madison Valley and commute to Big Sky on a daily basis.

“People that need to use that road find a way to get access on that road,” he said. “We have always maintained we want to see dollars flowing between the two communities and really support Madison Valley and allow people to live over there, and work over here.”