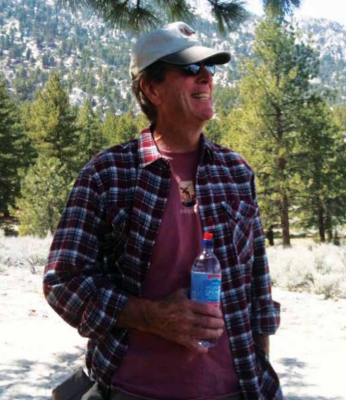 Two men, a moose and a hiking stick

Tom Urell and Jim Singer were out hiking up Jack Creek Trail, U.S. Forest Service Trail 6317, about 10 miles east of Ennis, Mont on Jan. 27. Both men were familiar with the area and were experienced outdoorsmen—both hunters and Singer formally employed at Glacier National Park.

As these things tend to happen, it was one of the only times they were without bear spray.

“He said ‘moose,’” Singer said, remembering Urell’s heads-up. “I looked up and there was a moose about 20 feet away and the moose came up and started kicking my butt.”

Pam Urell, Tom’s wife, said the bull moose went for her husband first. Tom and the moose were on opposite sides of a tree and Tom sustained a couple whacks from the ungulate, but it saw Singer 10 feet or so down the trail and changed course.

Singer noticed a log on the side of the trail and took cover behind it, consciously trying to keep his face and neck safe. The moose attacked, kicking at Singer laying behind the log, head-butting him, but ceased temporarily.

“It felt like I got hit by a linebacker from the NFL,” Singer said. He remembered being able to look the moose directly in the eye as he lay on the ground, thinking if he had asked the moose to spit in his eye and then leave him alone, he could have made that bargain.

It came back, and Tom stepped in.

Using his hiking stick, Tom started hitting at the moose on the side, then the nose, according to Pam. At one point, Tom thought he hit the moose in the eye. He was not sure he actually caught the bull’s eye, but he told his wife that whatever he did made it go away after it considered pursuing him.

“Thank God Tom stepped up. He thinks he poked it in the eye and then it took off after him. Tom is the real hero,” Singer said.

After the moose left, the two men—both in their 70s—walked out of the forest. Tom sustained a couple scratches and Singer a broken rib. He received treatment at Madison Valley Medical Center for non-life-threatening injuries and is recovering well.

From the time the two saw the moose to when it left, Singer estimated the whole ordeal lasted one and a half to two minutes. “But when something like that goes down, it’s not like I looked at my watch,” he said.

Even if either had bear spray, Singer reckoned it would have had to been primed and deployed the minute they spotted the moose. He estimated it took two or three seconds after he saw the moose to him taking cover behind the fallen tree and it being upon him.

Pam mentioned Tom often encounters animals when he is out in the wilderness and is typically prepared. She described him as fearless and a person you would want with you in a dangerous situation.

“And plus, he’s very handsome,” she said of her husband of 10 years.

If Jim anticipates an encounter, he will carry a “bigger than Clint Eastwood gun,” Pam said. “I don’t know if Jim would have gotten down off that mountain without Tom,” she continued.

“If he hadn’t stepped out behind that tree and exposed himself and poked at that thing to get it off of me, I don’t know what would have happened,” Singer said.

After the event, which occurred exactly a week before his birthday, someone asked Singer if he wanted to see the moose dead.

His firm answer was no.

“I was in his house,” Singer said. “If he broke into my house, I’m going to defend it, and that’s all he was doing.” Neither party did anything wrong, but it is just one of the risks ones takes when recreating outdoors.

Unless it was hunting season, Singer said. He would not mind having a couple of moose steaks.