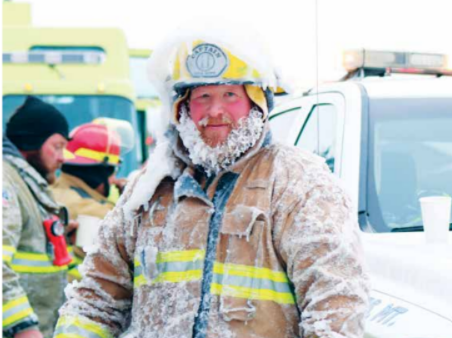 It takes a community

North winds blew and temperatures struggled to reach zero degrees in the pre-dawn hours of December 29. It was midway through a holiday week, inviting many to sleep in. Slumber on that quiet and cold morning was abruptly cut short for residents of Barker Village Apartments in Ennis – a fire had ignited in an unoccupied unit and was reported by a resident just before 6 a.m.

Emergency services and volunteer firefighters from both Madison Valley and Virginia City departments responded to battle the flames, already fanning through the roof. As luck would have it, only two units of the fourplex were occupied and no one was injured in the incident. The affected residents' circumstances included other housing options, said Barker Village owner and operator Erich Vogeli, so no one was left without a roof over their head.

Firefighters were able to put out the flames by around 8:30 a.m. The sun rose on an icy, charred scene. Charred apartments were coated in a thick layer of ice; hose-clad firefighters took turns spraying the still steaming and smoking apartment units.

Station 3 Captain Pat Noack, 13-year volunteer for the MVFD, aided in the fight. He’d just finished a treadmill run when the page came in, so he was ready to head to his station in the Varney area to pick up a truck, gear up and join the rest of his volunteer team at the incident.

Noack’s burly beard prohibits him from wearing the equipment necessary to enter a burning structure, so he took to one of the four hoses being used, spraying, and being sprayed on the west and east sides of the building for a couple bitterly cold hours. Self-admittedly “not a cold person,” Noack said the chill stayed with him for days. “It seemed like it took a long time to thaw out from that, like two days,” Noack said, laughing, and crediting his department's high-quality gear for helping him avoid frostbite. “That cold was in my bones. Even sitting by the fire. It fried me.”

Noack’s “real job” is owner of Noack Mechanix. Along with volunteering for the fire department, he also coaches youth sports.

“The gratitude is phenomenal; I love helping people,” Noack said, describing the reasons he’s been volunteering for so many years. “Fire is devastating, I’ve seen it do some major stuff, whether it's forest, brush, residential. There’s just a lot of people that can’t help themselves, and if we can help, I love doing it. If it does something to help the kids, help the community, I’m all about it.”

Madison County Fire Warden Joe Brummell said the cause of the fire, which ignited somewhere in unoccupied Unit 3, has not yet been determined.

Support also came quickly for the emergency crews, who were warmed by hot beverages and breakfast items delivered from Ennis eateries. Others even offered to help rehab hoses.

“It was like 7:20 a.m., I was pretty cold at that point, and after we asked for something to warm us up, it was there in five minutes,” Noack recalled, giving a shout-out to Maple’s, Kaleena’s, Yesterday’s and others for their support to emergency crews and those affected by the fire. “It was just typical Ennis, coming together for people who have lost everything. It’s amazing.”

Also grateful is Barker Village owner Vogeli, who finds some solace in the fact no one was injured in the fire. Vogeli’s gratitude also goes out to the Madison County Sheriff’s Department, the volunteer responders and firefighters for their efforts and response.

“They were all wonderful,” said Vogeli, “I recognized many of them, and I am very grateful.”

Looking to the future, Vogeli said he hopes to rebuild the fourplex, restoring Barker Village to its full, 20-unit capacity.