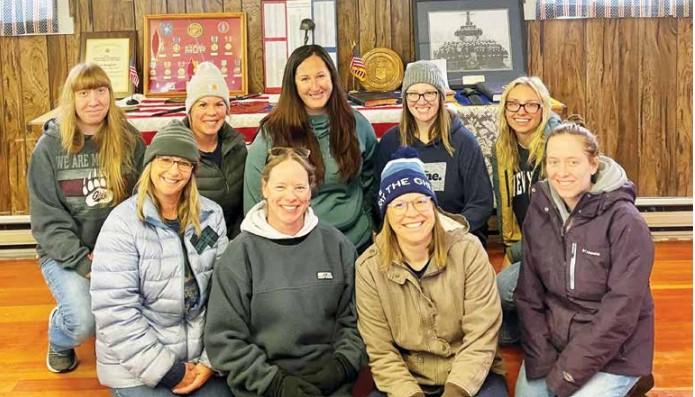 It only takes a spark

It only takes a spark to get a fire going, as the old adage pronounces. The Flying S Title and Escrow team in Ennis certainly ignited a blaze with an idea stemming from a challenge their company issued for a “Day of Service” on Veterans Day. Traditionally, the office would have been closed for the holiday, but this year the recently rebranded, family-owned company charged their offices to find a service project that would impact their communities.

The seed of the idea was planted in August, as a committee formed within the office to come up with a project that would impact the Ennis community. Amanda Harris, Sherri Ott and Kindra Todd served on the committee. Todd’s family has a military background. Todd joined the Army National Guard when she was just 17 years old. She chose to take the MOS (military occupational specialty) of 74D or CBRN (Chemical, Biological, Radiological, Nuclear) Specialist, served for six years and now calls Ennis home.

“I am eternally grateful for everything I learned in the military and will never forget what values it has taught me. Always be humble and never forget that tomorrow isn’t promised,” wrote Todd. With passion like that at the core of the idea, it’s no wonder the spark has spread. The committee reached out to Toni Bowen, knowing her husband Don had served in the Marine Corps. Bowen pointed them in the direction of Lee Sargent. The flame was lit.

Sargent serves as the commander of the American Legion Post 65 in Ennis - which also happens to be right across the street from the Flying S office. “In talking to him we discovered that the building was donated to the Town of Ennis in 1931 by Mrs. Katharine Ennis and he needed help to preserve and update the structure for the community. After visiting the property we realized there were many more things that needed to be done than originally thought,” said Amanda Harris, vice president and county manager of Flying S Title and Escrow.

The team at Flying S issued a challenge to the business community as Veterans Day approached. The community answered loud and clear. “These are the things that remind you of why you love where you live,” Harris commented.

“Amazing. Everyone showed up from our office and everyone was full of the spirit of service to give back to the Veterans,” said Harris.

On Veterans Day, the team; several “work husbands”; Jason Leslie, a member of the Legion who is new to town; and John Malovich, executive director of the Madison River Foundation all pitched in at the American Legion building. They helped clean all of the items out of the basement, where the projects need to start. The goal was to get everything moved from the basement Friday so mold remediation work could begin this winter. Beyond that, the crew went through the rest of the building, organizing and deep cleaning. Flags were organized and those that needed to be destroyed were put into the appropriate bins. Items needing stored were moved to a storage unit donated by Gary Croy.

Monday night following Veterans Day, the original committee attended the regular meeting. “Everyone was just blown away at how nice it looked inside,” said Harris. “What stood out to us was how heartwarmed everyone in the Legion was that the community cares about them. They were blown away by the level of support.”

Harris responded to that with, “The support has always been there. It’s just that there hasn’t been an awareness of what they (the American Legion) need.” She went on to say, “Once the community has awareness of a need, this community is going to dig in and do what they can to help somebody.”

The community has a need for meeting space and the thought of bringing the building back to glory is an enticing one. “We loved coming across the picture of Grandma Ennis when we were cleaning up. We knew she had donated the building. All of us afterward got a little misty-eyed because we were like, ‘Grandma Ennis would be so proud to see that nearly 100 years later people are caring about this donation,’” said Harris. “The community at that time was forward thinking about military families and the legacy and for us to come together now and carry that forward is pretty special.”

When Harris was asked about the impact on the Flying S team, she responded, “This started as a day of service for our office. It has grown into something more and we’re happy to spearhead it. The term we use in our office is ‘It’s our job to light the match and see where the fire goes.’ That’s what we’re passionate about, we want to bring awareness of the Legion’s need and keep that going.”

“We simply want to encourage everyone to either donate to the Legion or come up with a business idea that results in a give back to the Legion and the Christmas Stroll would be a fantastic opportunity for the business community. The Legion is a 501(c)(3) so donations are tax deductible. If anyone has any questions they are more than welcome to reach out to me,” said Harris. Amanda Harris can be reached at amanda.harris@ fste.com or 406.682.5337 to keep the fire going.

If you are a Veteran interested in joining the American Legion, attend the monthly meeting on the second Monday of the month at 7 p.m. Post 65 is located at the corner of 1st Ave and Steffens Street; Ennis. All veterans are welcome. American Legion memberships may also be purchased for friends of family members. Contact Lee Sargent.