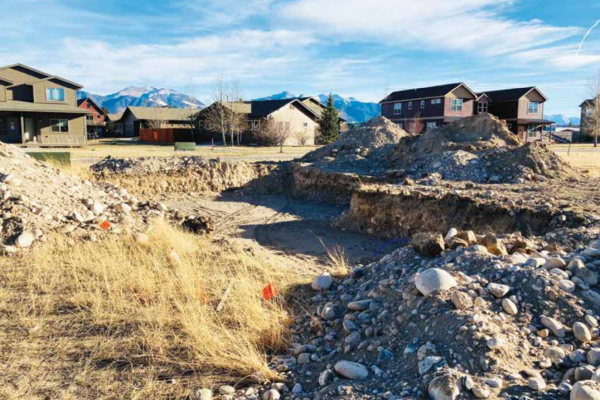 Schools, workforce feel the rise before and during Covid

The Twin Bridges School District, via School Board Chair Steve Janzen, reached out to Headwaters RC&D about housing concerns.

Different housing components affect the seven counties differently—some are impacted by tourism and Airbnb rentals, while others do not have adequate supply.

“We wanted to get a group of stakeholders together and really kind of flesh out what is the problem, (starting with) very initial talks about how we start to solve (the problem),” Willauer explained.

Willauer met with an Economic Development Administration Regional Planner over Zoom to begin the initial discussions. The idea is to look into things that have worked in the area—Habitat for Humanity projects in Ennis as one example—and talk about problems including available land for housing, inventory and what is currently on the market.

On Nov. 30, Habitat for Humanity broke ground on ten lots in the North 40 subdivision area in Ennis. “Ennis was selected because of the strong support from local residents interested in helping Habitat bring affordable workforce housing to the community,” David Magistrelli, executive director of Habitat for Humanity of Gallatin Valley Inc., explained.

“The goal is to build sustainable housing for the local Madison County workforce who are homeowner-ready but cannot obtain a mortgage through the conventional means,” Magistrelli said.

“I think that’s great for the town. It’ll definitely help with housing,” Marshall Bettendorf, executive director of the Ennis Chamber of Commerce, said. He described it as freeing up the next level—a person who can make the Habitat housing work opens a rental for those not yet in that position.

“Growth to me is definitely a good thing. I think there’s a lot of positives with new residents joining our communities,” Willauer said. From the economic development side of the conversation, lots of different parts and pieces have to be headed in the right direction for growth to happen, he explained. One big component of that is affordable housing.

The Twin Bridges School District housing concerns date back to 2018 when the district was putting together their strategic plan. The number one challenge in the way of meeting their goals was affordable housing. Janzen estimated as many as a third of the school staff does not live in the district.

He went on to present a difference in attendance numbers between 2018 and 2021.

The Average Number of Belonging (ANB) is a term used for the number of children in attendance in a district and is used for state funding calculations. Funds derived from this number go toward staff salaries and benefits, extracurricular activities and curriculum costs.

“Which is significant,” Janzen said and pointed out that would be a 13% decrease since 2016.

Housing prices have increased steadily throughout the Headwaters region, Willauer said, and Covid has attributed to that rise. He acknowledged the draw to this part of the state before and during Covid and that he has seen interest grow over the past few years. Now, the proximity to the Gallatin Valley and the housing boom there is starting to trickle into the Headwaters regions, Willauer said.

“This feels like, yes there is this real estate gold rush to the west like we’re seeing in the news, but our numbers would indicate that that surge of buyers are not families,” Janzen said.

Another part of the economic development conversation Willauer mentioned is making sure employees have somewhere to live.

Magistrelli said that Habitat had a meeting with local businesses in the Ennis area last spring to see if they were interested in collaborating to address employee housing issues by designating space for rental units or something similar. Businesses were not interested at the time, but the offer still stands for the North 40 lots, Magistrelli said.