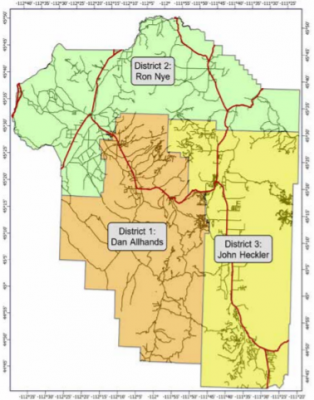 “Serendipitous” is an adjective that John Heckler, recently appointed Madison County commissioner, uses. That a retired civil engineer who specialized in water issues was appointed to a vacant seat at a time when water is a top issue could also be described as serendipitous. Or good luck. Or good planning.

In fact, he describes his moving to Ennis years ago as “serendipitous.”

“Like a lot of people who came here for fishing and the outdoors, I ended up staying,” he said. Heckler may look like an senior statesman, but he never held a political office before assuming retired Commissioner Jim Hart’s seat Nov. 23, 2021. A little more than a month into his tenure, Heckler says without qualification that he will run for election this November, when his appointed term is up.

“All I’ve done -- organizing, project development, having mentors -- it’s like I was in training for this job,” he said.

“Madison County is larger than Rhode Island and Delaware combined. District 3 extends from around West Yellowstone up to Harrison and over to Big Sky,” he explained. It’s about the same size as Rhode Island.

Big Sky is divided by county lines: the eastern part of Big Sky is in Gallatin County while the area that includes Big Sky Resort, Moonlight Basin and Yellowstone Club is claimed by Madison County.

“Big Sky residents are more than 20% of the population of Madison County,” Heckler said, explaining that a goal is to encourage more participation by Big Sky residents in county governance.

Heckler plans to spend time in Big Sky, to meet people who live and work in the unincorporated area and hear what’s on their minds.

“For years, as a professional engineer, I knew what I would be doing the next day, and it had to do with water,” he recalled.

Heckler says his experience as a professional engineer registered to work in 17 states enables him to contribute expertise as the commission deals with water quality and usage issues around the Madison River.

“Planning is a big part of my background,” according to Heckler, who spent 37 years with a national engineering firm’s Phoenix office. A favorite mantra is “think, plan, do” – a refrain that should have bearing for any fast-growing community.

More recently a local business owner who lives in Ennis with his wife Shannon, Heckler has a propensity for parables.

The commissioner cites a scene from “The Right Stuff,” a 1979 novel by Tom Wolfe about seven astronauts of the Mercury space program that became a 1983 movie with a stellar cast. In one memorable scene, astronaut Gus Grissom, who is terrified of public speaking, addressed an audience with just three words: “Do good work.” In other words, focus on the things that matter.

Heckler’s “good work” extends to his personal financial investments in local businesses, starting with Sugar High, an ice cream shop popular with elementary and high school students as well as with tourists. That business was sold to a family member.

He currently owns the Madison Theatre and the Alley Bistro in Ennis.

The self-described capitalist has shown by “doing” that capitalism and altruism are compatible. Until Covid and distribution obstacles halted the program, Madison Theatre screened kids’ movies after school on Fridays, when there was no after-school program to help working parents. The movie theatre, built in 1935, and the bowling alley, a gathering place for more than half a century, are artifacts of Ennis’s past, and represent poignant memories for many people in town. As someone who was born and raised in a small town, Heckler believes it’s important to preserve Ennis history.

“We didn’t want to see another small town in Montana with a vacant movie theatre,” he said.

Is he an advocate of “smart growth”?

“I believe in directional guidance,” Heckler replied, and cited another story. “I was raised by my mother and my grandmother. My mother told me: ‘if you find a problem, it’s yours to solve until you find someone else who can handle it better.’

“I think you’ve got to care,” he reflected. “If you do this, you’ll be successful.”