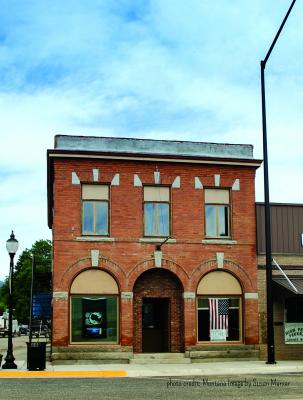 SHERIDAN—At the end of May, the Ruby Valley Healthcare Foundation received the deeds to two properties in downtown Sheridan, an enormous donation in support of the Ruby Valley Hospital and the larger community. It was a transfer that had been in the works since the fall of 2017, says Foundation President Les Gilman.

“We needed to raise $2 million to build the new hospital, and we did that and then some,” says Gilman of the new Ruby Valley Medical Center that’s set to open its doors in August. “This gift puts our grand total very close to $5 million since the inception of the Foundation in 2006. People continue to be very generous in making contributions.”

The two items in the real estate donation came from an anonymous donor who sought simply to support the town of Sheridan and its health care system. Both are historic buildings built around the turn of the century: The Rod and Rifle Inn on Mill Street and the historic bank building on Main Street. Now that the transfer is final, the next step will be for the Foundation to decide how best to utilize their new spaces. Plans are in the works for The Rod and Rifle, but the historic bank presents a blank slate full of possibility.

The Rod and Rifle

The Rod and Rifle Inn was initially built in the early 1900s as a private residence and remains one of Sheridan’s most iconic historic buildings.

The family that lived in it ultimately sold it, and it was utilized by the community as a meeting place for a couple of churches through the 1960s and 1970s. Shortly thereafter it became The Rod and Rifle.

In the mid 1990s, the inn was transitioned into use as a vacation rental and has served that purpose ever since.

When the Ruby Valley Healthcare Foundation received the Rod and Rifle, the board of trustees made the decision to sell the property via auction, a move that will take place later this fall.

Gilman notes that a significant goal of the Foundation is to establish an endowment, and the funds from the auction of The Rod and Rifle could be a key element in accomplishing that. Such an endowment would allow the Foundation to be prepared to purchase new equipment and better facilitate the transition of Ruby Valley Medical Center from its old facilities into its new ones later this year.

The Foundation will hold several open houses at The Rod and Rifle over the course of the summer so that potential buyers can look at the property. Those open houses will take place on Sunday, August 12, Thursday, August 30 and Wednesday, September 12.

Sheridan’s old bank building was also built around 1900 and remains in good condition. As the name implies, it originally functioned as a bank before being converted for a variety of uses, including restaurants, during its lifetime. Most recently, Gilman says, it has housed a realtor’s office as well as an apartment in the upper level occasionally used as a rental property.

“The future use of that building is yet to be determined,” says Gilman. “But it’s nonetheless a very generous gift in a prime location.”

The Foundation could choose a variety of paths to utilize the bank building space, from offices and administrative space to storage or event space. But for now, it remains up to the board of trustees to decide what will happen there. Sheridan real estate agent Jim Kaatz managed both properties for the anonymous donor who gave them to the foundation, overseeing the property transfer to the hospital at no charge to the Foundation.

The Foundation may also be determining future uses for some other spaces in the future, but that is not yet certain. The hospital district plans to transfer the old hospital facility to Sheridan into the Foundation’s control, but decisions would not be made as to what to do with the space until that transfer is certain and complete, which could be several months.

“We will have to make some plans when that transition occurs,” says Gilman. “We’ll have to make a decision about what would be the best thing for the community, in support of the hospital, for that building.” Gilman also notes that whatever the fate of the old hospital building, it couldn’t be used for office space or as part of the hospital, which will be self-contained in its new facility.

In the meantime, the Ruby Valley Healthcare Foundation continues the philanthropy that has been so strong in allowing for the new hospital in the first place. A variety of the hospital’s clinics and waiting rooms have already been sponsored and named by both private donors and organizations, including 15 memorial benches purchased for $500 each, which will be placed around the hospital. Several naming opportunities are still available, including everything from furniture in the main lobby and clinic waiting area to the hospital’s new helicopter pad.