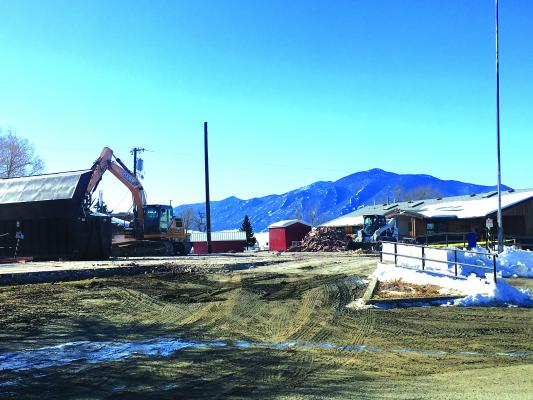 Gone in a blink

SHERIDAN—And just like that, the old Ruby Valley Hospital building in Sheridan is gone.

The hospital’s Board of Trustees unanimously voted in January to tear down the building, after efforts to find an economically-viable use for the empty space were unsuccessful. A request for proposals and suggestions put out by the board went unanswered, so the powers that be voted in favor of tearing down the building. They will continue to deliberate on what will fill the space in the future.

The old hospital had many deficiencies that would have had to be overcome to repurpose the building. It was built without an automatic fire sprinkler system and without air conditioning, as well as inadequate ventilation and insulation. It also wasn’t entirely ADA-accessible, as the new hospital—finished in August of last year—is.

Work on the demolition of the old hospital began the second week of March, and by March 20 the building was gone down to the cement foundation. The pine tree in front of the space, as well as the painted trout statue featuring scenes of the Ruby Valley, will remain in place.

The medical clinic building which stood adjacent to the hospital will also remain on the property. The Board of Trustees agreed to lease that building to the Sheridan Senior Center for use, since all medical personnel and facilities are now housed in the new hospital just up the street.