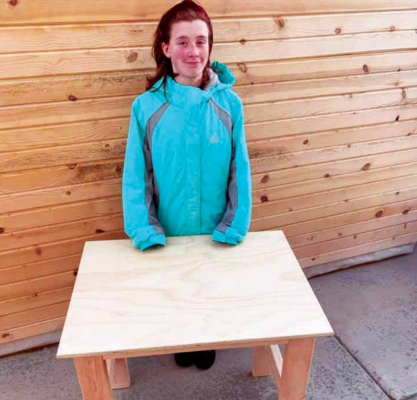 Nutty Montanan owner Dennis Davies will be the first to admit he’s got neither the time nor the money to take on his most recent project – building and giving away desks for any kid that needs one, “But my intuition tells me I should be doing this,” he said, with 10 desks completed on only his third day into the project. “So, we’re doing it.”

Davies was inspired by Nate Evans, an Iowa literacy teacher who has given away more than 700 desks to kids in need through his project Woodworking with a Purpose. The project was even highlighted on Good Morning America on Jan. 19. “I looked at it, and I was like, well, I gotta’ do this now too,” said Davies.

Nutty Montanan produces and sells a variety of seasoned nut snacks, so one might wonder, just why would a snack manufacturer want to build desks? Quite simply, Davies used to work in construction before delving into the snack business, so desk building is certainly within his wheelhouse.

One downside to the project, said Davies, is that cost of materials, wood especially, has gone up astronomically as of recent – tripling in the last few months. Eight-foot two-by-fours used to sell for about $2.29 but are now selling for $6.

“So, we are just going to plow along and see what we can do,” Davies said, undeterred by prices.

With costs of wood, glue and hardware combined, each desk costs about $30. Davies said he’s had sponsors cover hardware and glue and is reaching out to a Bozeman wood purveyor to see what could be done on that end. He’s also had a number of folks reach out with monetary gifts – even a Facebook friend who he said shares very differing political views than his own.

Davies said he’d like to craft thousands of desks if the need is there, “And I guess if we are meant to do that, we will come up with the material.”

Many have reached out to help within the project’s first week, from a family of seven to several couples and a number of individuals. On Jan. 19 Davies was busy getting the wood ready for assembly of more than 100 desks. “And we will go from there,” he said. “This is totally seat of the pants, but the way I figure, the people and the things that I need to make it work will come into play whenever it is that I need them. I am pretty simple that way, and it’s always worked out for me.”

In 2008 when the economy went sour Davies used that mindset to shift from his construction career to the snack business – he had lost everything prior to the switch, “but the one thing about it, is even in a bad economy, regardless, people will still buy comfort food,” he said. “So, in a weird way I am thankful that what went wrong in 2008 has allowed us to survive this go-round.”

So far demand for desks has been strong, and the word hasn’t even officially gone out except for on social media. Davies, who lives in Helena, will be bringing several desks to a school there for the guidance counselor to dole out as deemed fit and then they’ll let him know how many more are needed.

Still a project in process, Davies envisions being able to build batches of desks then let communities know they are available for pickup at a given location. He’s not concerned about income requirements, rather, he just wants the desks to go to anyone who can use them.

Davies’ desks can take anywhere from 45 minutes from start to finish to create, but he said that if multiple people take one on, it could take as little as 20 minutes if the parts are all cut and ready to assemble.

“We’re just going to see where it takes us,” he said.

Madison County may be a bit of a jaunt from Helena, but Davies said it’s not an issue – he’s willing to get the desks to wherever they’re wanted, and many are being assembled in Belgrade.

Early in the morning on Jan. 24 an unexpected medical hurdle placed Davies on the sidelines for a bit – an “impressive” seven-millimeter kidney stone tends to do that – but he said he’s not letting any setbacks keep him down and plans to get back at it as soon as he’s able.

With four people trained to assemble, and plenty of parts to keep the desks coming, the project will continue. “Things will keep moving, they might not keep moving as quickly as I’d like, but they will keep moving.” Davies said on Jan. 25, resting in his Helena hospital room before a noon surgery to remove that pesky kidney stone.

Plans are in the works to set up a big day of assembly; all who are interested are invited to join in the desk making venture. To learn more or to get involved, reach out to Davies at 406-581- 5241, on The Nutty Montanan’s Facebook page, or via email at info@nuttymontanan.com.