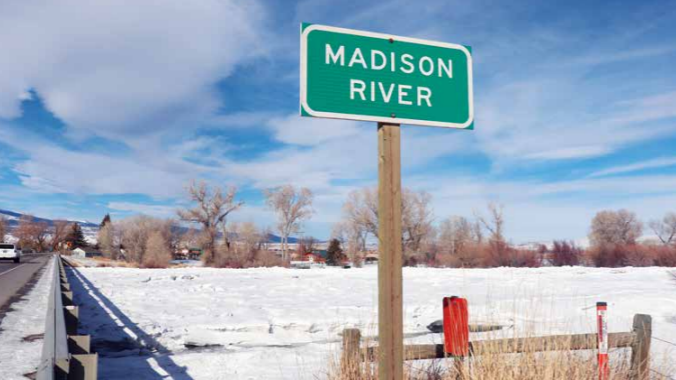 It’s hard not to slow down these days as you cross the bridge over the Madison River at the east end of Ennis. The icy flow is in constant flux – in the morning it may appear like a glacier, slowly carving its way down the channel. By the afternoon, a water channel may have appeared, giving a glimpse of the fast-moving, icy blue water beneath. And then there are the ever-evolving outer channels, spreading out like veins across the valley floor with no mercy given to anything in its icy path.

Some years, this happens. Some years, not so much. Suffice to say, it’s a phenomenon worthy of some awe, respect, and maybe a photo or two.

A few years ago, the Montana Department of Natural Resources and Conservation hired Michael Baker International to do a hydraulic analysis in the vicinity of Three Forks, an area which deals with ice jams stemming from the Jefferson River. Could these jams be predicted and better managed?

Baker’s report began with a history lesson regarding the Madison River’s frozen forays. It was noted the first clear description of ice-affected flooding on the Madison River comes from J.C. Stevens in 1922: “The Madison River…flows through two agricultural valleys locally known as the Upper and Lower Madison Valleys. In these valleys the river banks are low, and near the lower end of each valley the river divides and subdivides into a network of many brush-lined channels.

“In these many channeled parts of each valley, during the cold winter months, ice gorges of varying characteristics are formed. These gorges frequently cause the river to leave its channel entirely and flow across the valley floor, occasionally driving the residents from their homes and leaving the valley covered with solidified frazil ice many feet in thickness.

“The winter of 1916-1917 was one of exceptionally sustained, moderately low temperatures, during which an unusual quantity of frazil and anchor ice was formed. This resulted in ice gorges and extensive overflow of agricultural lands in both valleys.”

“The Madison is probably the largest river in the state in which river overflow conditions [caused by ice gorges] are so pronounced. The reasons are not hard to find. Madison River has a fairly steep gradient throughout its course. In the two valleys the banks are low, the river is shallow and wide, and the bed is strewn with boulders, cobble stones and gravel.”

Stevens’ observations ring true 100 years later, now known as the gorge. Frazil and anchor ice were pointed to as instigators to the gorge, though no definition was provided.

Frazil ice, or slush ice, occurs with a combination of relatively rapid streamflow and below freezing temps. Rivers and streams appear to flow with slush rather than water. Frazil ice forms when mist from the warmer water freezes, collects and floats downstream.

Anchor ice forms on large objects projecting into the water, like rocks, brush and reeds. Given a sunny day, the anchor ice can release, float to the surface, and provide more area for frazil slush to attach to and grow.

Eventually, this frazil-anchor relationship chokes the river channel, effectively damming it with ice. As Stevens wrote in 1922, “Overflow is inevitable… There is practically no limit to the extent of overflow or ice accumulation that may occur as along the critical degree of cold continues.”

According to the Baker report, construction of the Hebgen (1914) and Madison (1901) reservoirs has had a notable impact on the magnitude of ice-affected flooding in the Upper and Lower Madison Valley; regulating flows and providing a barrier to transport upstream ice.

Stevens noted two types of ice gorges appearing on the Madison: the “bridging gorge,” in which little or no overflow occurs, and the “overflow gorge.”

Sudden and sustained extreme low temperatures, ranging from -15 to -30 degrees Fahrenheit, are to blame for the bridging gorge. This forms the maximum amount of frazil ice to form, choking the length of the river with a sluggish mix of ice and water. This type of ice action is not uncommon and can be found in many areas

The bridging gorge, according to the report, is “unique and does not fit the typical description of an ice jam.” A bridging gorge does not form solely from downstream transport and accumulation of ice, but rather from continual formation of ice. This makes for a continual supply of ice until temperatures rise or flow ceases.

Residents of Ennis are wellaware of the Madison’s gorging potential – it happens most years. This year, though, the ice rose high enough to breach the Lions Club Park, slowly but persistently flowing past the benches along the river, into the fishing pond, playground and baseball diamonds.

River water breaching the park during the gorge is not uncommon, said Fish Wildlife and Parks Fisheries Technician Travis Lohrenz, but it doesn’t make it any less inconvenient.

Lion Russ Whitaker, member of the organization’s park committee, said beyond the “POLICE LINE DO NOT CROSS” yellow tape which keeps people out of the park, not a lot is known as to the extent of the damage, if any, caused by the ice encroachment.

“It’s one of those things, we’re going to have to wait until the water goes down to be able to go in and see what kind of damage is done to any of the park infrastructure, like, the walking paths, benches, picnic tables,” said Whitaker. “

When the ice and water does recede, the community may be invited to assist in cleanup of debris or with fundraising efforts. As to when that happens, only time will tell. The Town of Ennis provides weekly updates on the park’s status on its website: https://www.ennismontana.org/.