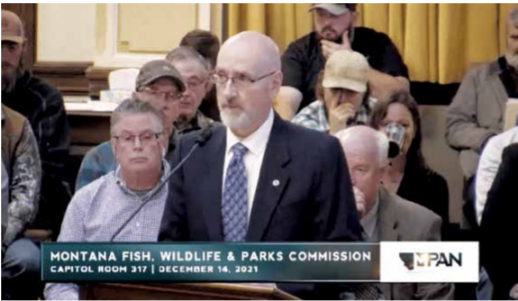 Montana Fish, Wildlife and Parks has backpedaled on a controversial elk management strategy after a public response that FWP Director Henry “Hank” Worsech described as a “firestorm.” Even after the department backed away from the most contentious proposal it had planned to present to the Fish and Wildlife Commission, public commenters continued to raise concerns at last Tuesday’s commission meeting in Helena about a process they said has been rushed and favors large landowners and brings the state closer to privatizing wildlife.

In response to public comment, FWP decided not to move forward with a measure that would have allowed hunters to buy over-the-counter tags to hunt elk on private property in eight hunting districts while simultaneously reducing the number of tags available to public land hunters. Worsech acknowledged receiving heated feedback over the past week but defended the department’s approach, saying he wanted to try new strategies to reduce elk numbers in areas where they’re above the population targets set by the department, particularly in places where landowners are concerned about elk eating available forage.

He said he had asked department staff to bring forward proposals centering biological objectives as well as those focused on “the social standpoint.”

“Doing the same thing over and over again and expecting a different outcome is the definition of insanity — I wanted to look at something a little bit different,” Worsech told the commission.

“We … threw a proposal out that was going to come in front of the commission that was wide open, and it went to opening general licenses for private land and limiting public participation and permits because we wanted to make sure we didn’t harvest too many elk in those areas,” Worsech said. “That really started a firestorm and I take full responsibility for that.”

Worsech said he was motivated to propose the approach due in part to conversations with landowners frustrated by their inability to hunt on their own property. He said the public response in recent days has inspired him to put together a committee of 17 people representing stakeholders including the Montana Wildlife Federation, Backcountry Hunters and Anglers and the Montana Stockgrowers Association to continue hashing out game management issues. He said that committee, which he’s received approval from Republican Gov. Greg Gianforte to form, will be tasked with finding ways to increase access opportunities for hunters and reduce elk populations, particularly on private land.

In place of the scrapped plan to reduce tags on public land and lift caps on private land tags, the commission heard testimony on and ultimately advanced six proposals that will now go out for a 30-day public comment period before the commission decides which, if any, to incorporate into the state’s 2022-2023 elk regulations.Those six proposals are weedy, technical matters, but they do share some common themes — namely, how the commission will balance high elk populations, public hunter opportunity, and the concerns and desires of private landowners. (Though FWP and lawmakers have fielded comments from private landowners frustrated that elk are eating forage on their property, thereby decreasing grass available to livestock, critics have pointed out that some of those landowners also gain considerable financial benefit from their ability to sell hunts for trophy elk to outfitted hunters.)

One of the six proposals affirmed by the commission would expand the number of elk tags available in eight districts where elk are 200% or more over objective by 50%. For example, such a district with 60 permits — which are allocated through an annual drawing — would increase to 90 permits.

Another proposal would do away with the “900-20” archery license that includes 22 hunting districts spread out over regions four, five and seven. That license is currently allocated by drawing. Hunting districts subject to the current 900-20 license would shift to a different management scheme under the new proposal. About half of them would transition to general license areas, meaning hunters who hold a statewide elk archery license would be eligible to hunt in them, and the other half would change to what’s called an unlimited permit. There would be no cap on the number of unlimited permits — or tags — available to hunters, but hunters who get them would be restricted to hunting in only those districts during the dates set out in the permit.

Another proposal dubbed the “Statewide Elk Permit Definition” would require hunters who obtain tags for specific hunting districts to hunt within the boundaries of those districts while the permit is valid, rather than moving around the state in hopes of increasing their likelihood of success harvesting a bull elk in other areas. (Under current regulations, hunters with a tag for a specific area can also hunt outside of that area if they purchase a general tag in addition to the special district permit.)

A “Late Season Antlerless Elk” proposal would allow the commission to set late cow elk seasons in districts that are over population targets on private and some public lands. That season could run as late as Feb. 15.

Finally, two catch-all proposals were passed at the Dec. 14 meeting, allowing the commission to consider additional changes to elk management at a future meeting.

“I think the process is going to be a lot more constructive,” Marchion said. “I think we were on a bad path, a confrontational path.”

At least four of the approximately 40 people who offered in-person or remote testimony Tuesday referenced the state’s Elk Management Plan, which was last updated in 2005. A rewrite of that plan kicked off last year when a citizens advisory committee issued guiding principles and a briefing paper about their efforts. Several commenters said the department should finish that plan update before introducing significant regulatory changes, and expressed skepticism about the validity of FWP’s elk population targets.

“I really would encourage the department to focus first on the elk management plan and getting an overall strategy and a better consensus around the elk [objectives] that many of my constituents feel were more-orless arbitrarily reached,” said Rep. Tom France, D-Missoula, in a statement before the commission.

Rep. Mary Ann Dunwell, D-Helena, and Sen. Brad Molnar, R-Laurel, also offered comments, as did U.S. House candidates Monica Tranel, a Democrat from Missoula, and Jack Ballard, a Democrat from Red Lodge. Both Tranel and Ballard touched on landowners’ roles in the discussion.

Tranel said she sees several of the proposed regulations as “taking the resource that Montanans treasure and own, and giving it to these billionaires who have lots of private land.”

She referenced brothers Dan and Farris Wilks, among the state’s largest landowners, in her remarks.

The Wilks brothers participate in a landowner access agreement program on N Bar Ranch near Lewistown that allows them eight guaranteed bull elk tags — which often fetch good money from outfitted hunters — in exchange for opening their land to public hunters, eight of whom the Wilks would select to hunt either sex, and another 16 chosen by FWP who would be limited to cow elk.

Critics have blasted that program, describing it as an opportunity for private landowners to “sell” Montana’s wildlife via trophy bull elk hunts and out of step with the “public trust doctrine” of wildlife management Worsech said he subscribes to at the start of the commission meeting.

Proponents of the landowner access agreement program like Commissioner Pat Tabor, founder of a Swan Valley outfitting company, have said the program creates “opportunities for folks that they would never have.”