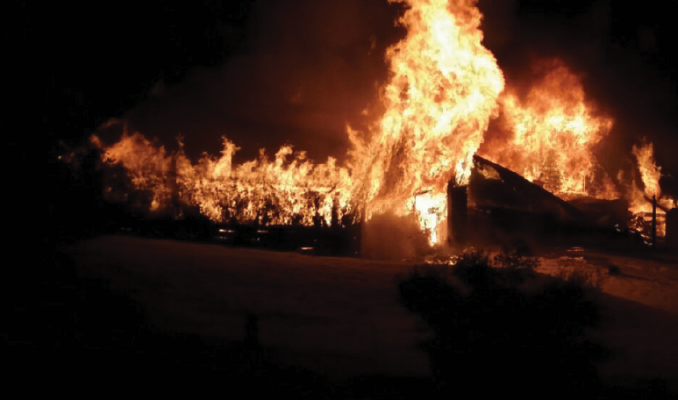 When a fire, which consumed a house in Pony and killed a dog, was dispatched to the Harrison-Pony-Norris-Summit Valley Volunteer Fire Department in the early morning hours of Oct. 30, the full roster of six volunteers reported to the fire department in Harrison.

The department responded with their older fire engine because their newer, 2006 fire engine had complications. Whitehall Volunteer Fire Department brought a water tank, and five firefighters came with an engine from the Madison Valley Rural District Station in Ennis.

“The fire was diagonal from our house,” volunteer with the Harrison Pony Norris Summit Valley Volunteer Fire Department, Janet Ore said. “And it was completely engulfed when I left to come here.”

According to the department’s fire chief, Boice Atkinson, the two residents had lived in the house for about a week and had to climb out of a one-story window to escape the fire. The fire caused the house to collapse in on itself, consuming it along with the garage, two cars and the life of a pet.

“It was in the middle of town, up on the hill” Atkinson said. “It was big flames.”

It is unclear how the fire started but it took about 4,000 gallons of water to put out. Low temperatures complicated the six-hour battle. It was 15 degrees below zero when Atkinson arrived at the fire.

“We were having problems keeping water going,” Atkinson said. “The nozzles kept freezing up. If you drop the nozzle, just for a minute, it freezes.”

The Harrison-Pony-Norris-Summit Valley Volunteer Fire Department has another issue that transcends outside temperatures, its roster. The department’s 300 square-mile response area is a lot for six volunteers to shoulder. The department depends on these active members to provide timely fire services to Madison County’s northern communities.

“They usually all show up,” Atkinson said.

When Atkinson started volunteering at the department in Harrison a little over 13 years ago, about 11 volunteers were on the roster. Most of them have retired now, except for Atkinson, Pete Armstrong and Marsha Atkinson.

Three of the current six volunteers respond to the Harrison department from town. Two respond from Pony, and Armstrong responds from South Boulder, which is out toward Cardwell. He lives the farthest away but somehow is usually the first at the station, according to the group.

The fleet consisting of a water truck, a fire engine, a command unit and the six volunteers recently gained a newer fire engine, which was purchased from the Gallatin Gateway Fire Department for about $50,000. The engine is worth about $200,000, according to Atkinson.

They got a loan from the bank and received the firetruck with 33,000 miles a little over a month ago. It can transport five people, compared to the three people that their nearly 13-year-old firetruck can carry.

“We needed something to carry more people,” Atkinson said. “I’ve been trying to get a new truck since April.”

Both engines would respond to most fires in the future, offering more options and resources to put out flames. The department’s new engine carries 750 gallons of water and five firefighters can walk out fully suited in their self-contained breather apparatus suites – another way that the new addition is an efficient asset to the department.

Its main voyage with the Harrison-Pony-Norris-Summit Valley Volunteer Fire Department was unexpectedly delayed due to mechanical issues, making it unavailable for the third structure fire in the area this year.

“It was finished and ready to rock and roll,” Atkinson said. “But then another problem.”

Atkinson expects the truck to be in service within the next few weeks to accompany the six volunteer firefighters, whom all stressed the need for more volunteers from around the area.

“If we had 15 people on roster that would be great,” Atkinson said. “And being a volunteer doesn’t mean you have to know how to fight fires. We need a secretary and a treasurer… there are always other jobs.”