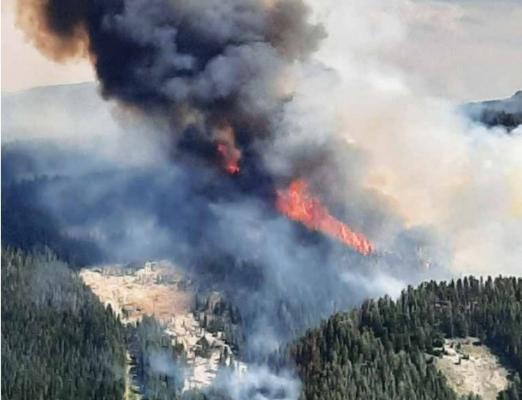 Fire season is upon us once again. The Clover Fire in the Beaver-head-Deerlodge National Forest has grown significantly in the past week.

According to the U.S. For-est Service, the fire is located near the Middle Fork of Warm Springs Creek in the Gravelly

Range of the Beaverhead-Deer-lodge National Forest. This area is roughly 14 miles southwest of Cameron, Montana on Highway 287.
This is also near the area of the Monument and Wigwam fires of 2018, which burned over 10,000 acres collectively.

The origin of the fire was a lightning strike during a storm on July 13, according to the U.S. Forest Service. Initially the fire was not an apparent threat, how-ever it has grown exponentially in the past few weeks.
The Clover Fire is still growing. As of this writing, the current size of the fire area is estimated at 546 acres by USFS heat source mapping. It grew significantly over the weekend of July 23. The fire is currently just 5% con-tained.

“Fire Crews continued with targeted burning operations today to strengthen containment lines around the Clover Fire. By intentionally firing along the fire-line’s inner edge, they are remov-ing fuels that otherwise could lead to this fire jumping the road. As a pre-existing containment line, this work to reduce fuels creates a larger fire break around the fire.

Due to this firing, an area clo-sure order for the Clover Fire has been issued and can be viewed in full on the B-D website at https://www.fs.usda.gov/alerts/bdnf/alerts-notices and is in effect as
of 22JUL22. Recognizing that this is a popular and beautiful recreation area, we understand that this may require recreation plans to change for our public and appreciate your support.”

According to the U.S. Forest Service, the fire is moving East and Southeast towards George Boyd’s Camp, which is south of the Clover Meadows Camp-ground. A firefighting base has been set up near the Upper Can-yon Outfitters in the Upper Ruby.

Updates will be available at a sandwich board located near the Alder Post Office and on https://inciweb.nwcg.gov/incident/8262/
The U.S. Forest Service is considering conducting a public meeting in Madison County in the near future. More informa-tion will follow in the coming weeks.