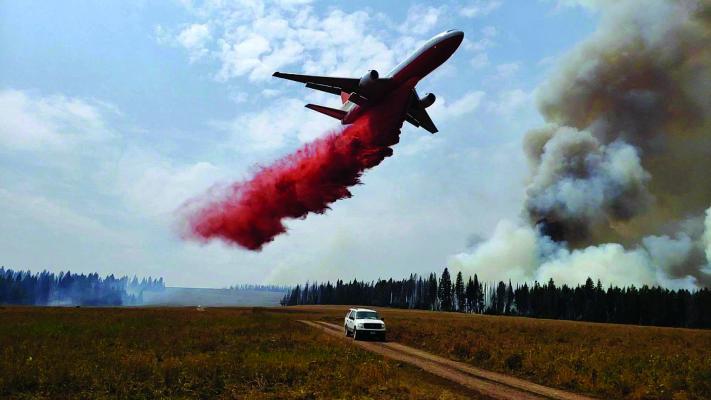 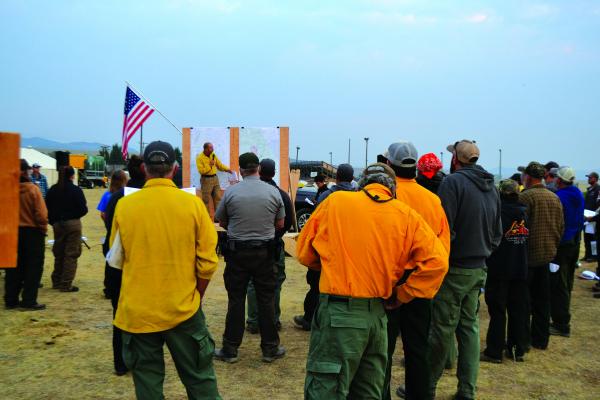 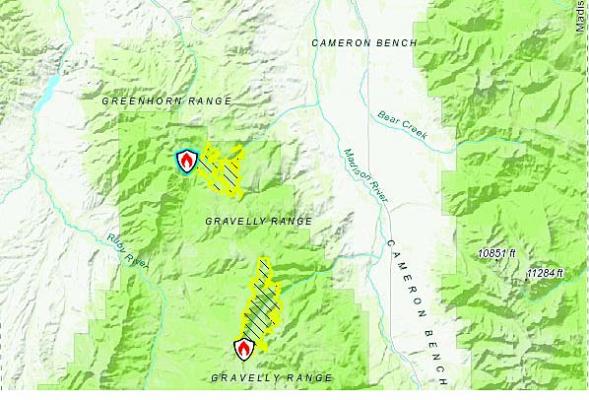 ENNIS—A fire camp big enough to be another Madison Valley town sprang up in Ennis last week as an incident management team from southern California arrived to begin work on the Monument and Wigwam fires.

The crews on the two fires total about 240 personnel, but the camp also includes everything from a shower facility and a contracted caterer to feed all those firefighters to a National Weather Service meteorologist and section heads in charge of safety, finance, fire behavior, medical, logistics and management.

A supply tent has everything from chainsaws and fire clothing to bear spray, and people who can train firefighters to use it. After all, personnel at the camp come from Alaska to Alabama and everywhere in between.

The geographic reach of the team is so large because the response teams around the Great Basin region are all occupied with fires of their own, says Marc Peebles.

Peebles, a fire engine chief in southern California for over 30 years, was redirected from California’s Mendocino Complex Fire—the largest in the state’s history at over 366,000 acres—to come up to the Monument and Wigwam area.

“There are 44 incident management teams (IMTs) in the United States, and over a hundred active fires on federal lands right now,” says Peebles, one of the camp’s public information officers. “They’re stretched very, very thin. But this forest needed an IMT, so the system will find that.”

The crew that arrived last week comprises around 45 people and works in the Monument and Wigwam fires in shifts. In places where structures might be threatened, like the Haypress Lakes area that has already been evacuated, there is a 24/7 firefighter presence to ensure the subdivisions stay safe.

“It’s chasing timber and it will keep chasing timber,” said fire behaviorist Oscar Vargas at an early-morning crew briefing Friday, August 17. The flames are easiest to repress when they cross into grass, so crews work to identify areas of access where they can do that most safely and efficiently.

By the end of last week, neither fire had changed very much. Winds from the southwest pushed the Monument fire against the drainage where it is burning, which meant easier access for crews and suppressed growth.

A red flag warning was in effect from noon to midnight on Friday, warning of scattered wet and dry thunderstorms that would require careful monitoring. Afternoon sun presses atmospheric humidity down each day, which isn’t good news for suppression efforts.

The weekend brought cooler temperatures, but those thunderstorms did roll in, and they started two new fires in the Madison Valley: one near Standard Creek and one near Norris.

Both of those fires were extinguished—the first at less than an acre in size and the second after growing to around 75 acres.

“It’s all a big dance,” says Peebles. “Putting the right aircraft on the right fire at the right time is really complex. But public lives and property are our top priority.”

Even with the larger crew, the ideal resources simply aren’t available all the time because of the number of fires burning across Montana and the U.S. this month. The IMT puts in orders for the things they need, but can’t always pin down when they’ll get them.

Resources are so thin in some places that the office trailers the IMT would usually use as their camp buildings are all in use on other fires—and there are a lot of them. Instead, camp is mostly comprised of yurt-like tents and sawdust floors. The firefighters sleep in one- or two-man tents in a designated sleeping area.

“We’d pound this thing to death if we had the resources,” says Peebles. “We get resources from all over the U.S., and they’ll send us their stuff when they can. But these fires will go out.”

On Monday morning, August 20, the Monument and Wigwam fires were the fifth and sixth highest priority burns in the Northern Rockies region.

By Tuesday morning, August 21, the weekend’s cooler weather and Monday’s extensive rainfall provided an advantage to crews working on the Monument and Wigwam fires.

A major concern with the Gravelly Range fires is spotting: Because of the nature of the fuels the fire is burning stands of tall, clumped trees, and can throw sparks far enough to jump over fire lines and ignite new hotspots.

Crews worked over the weekend to deter just that, bringing in bulldozers to the challenging topography in an attempt to build lines large enough to contain the fire. A very large air tanker (VLAT) was also dispatched to perform retardant drops along the fire’s edges.

The Monument Fire had grown to 6,613 acres by Monday morning and was 13 percent contained. By Tuesday morning, this had not changed. To the south, the fire is beginning to run out of fuel, which is good news for fire crews.

So far, no injuries or structural losses have been reported with either fire, but smoke columns were visible from Ennis for most of last week.

ENNIS - About 100 people, most of them in the path of the nearly 4,200-acre Wigwam fire, came to a public meeting about it and the 5,400-acre Monument fire held at the Madison Valley Rural Fire Department Station, on Fish Hatchery Road, Saturday morning, August 18.

Those at the meeting came away with a message of hope, as well as a warning.

“I like to hope for the best, and prepare for the worst,” Team 3 Commander Mike Wakoski told those listening. “But hope doesn’t put out fires. We do.”

The calling in of Team 3, Wakoski said, was a result of prioritizing both the Monument and Wigwam fires among a list of other Rocky Mountain fires that he described as “two pages” long. Wakoski said he hadn’t seen this much fire activity since 1988, when a large chunk of Yellowstone National Park burned.

When Team 3 was called in, he said, they set up camp at the town rodeo grounds and began “working our butts off,” to get a handle on both fires.

He called the county a great partner in aid and planning for fighting these fires, lauding law enforcement and the fire departments as being like family.

Building relationships was what firefighting was all about, Wakoski said, vowing to “…say what we’re (USFS) is going to do, and doing what we say.”

Wakoski and Rick Marinelli, Operations Section Chief of Team 3, updated those at the meeting on the status of the two fires:

• Cooler weather, a little bit of rainfall on both fires and north and northwest winds helped firefighters battle the blazes, Wakoski said.

• Still, as of Aug. 18, the Monument Fire had grown to 5,733 acres – up from 5,400 acres on Thursday, August 16. The fire was considered to be 15 percent contained, a figure up 10 percent from Aug. 16. Currently, according to USFS information, there are two engines, two water tenders and 122 people working on this fire.

• Marinelli said both the northern and southern ends of the Monument Fire have been “anchored,” with the help of aircraft. Fixed wing air tankers also dropped retardant along Johnny Ridge – a trouble spot – north of the Monument Fire to help check fire spread, and that Johnny Ridge Road crews are clearing brush and preparing the road for firing operations to burn out ground fuels back toward the main fire. The southern part of Monument Fire burned into Ruby Creek, consuming most available fuels and helping the fire remain “calm.” In the southeast section of the fire, crews are scouting opportunities for fireline locations to keep the fire west of Teepee Creek drainage.

• As of Aug. 18, The Wigwam Fire had stabilized at nearly 4,200 acres and was considered to be 10 percent contained, a significant jump from the no containment proffered by USFS information on Aug. 16. Some 11 fire engines, three bulldozers, a water tender and 132 firefighters are currently battling this blaze, according to USFS information. Meanwhile, crews continue to scout for natural barriers and locations to keep the fire on the northeast side of Gravelly Range Road and continue removing brush and fuels from Road 292. A contingency line (a line of bulldozer-opened ground to check the spread of a fire) was constructed on the north side of Wigwam Fire to Haypress Lakes and will continue to Haypress Lakes Trail Road.

• Night shift crews were positioned on both fires to patrol, check for spot fires, and provide for structure protection. A Structure Protection Group has been formed to specifically focus on protecting homes and outbuildings threatened by fire. This includes removing fuels from around structures, laying fire hose, sprinkler systems and other actions, especially in the Haypress Lake area, where some spot fires were burning.

• Aircraft – including both fixed wing tankers that drop retardant and four helicopters, used to drop water – are being used to fight both fires, but particularly in Wigwam Creek.

• Wakoksi anticipated that Team 3 would have a 14-day stay to fight the fires. After this, the fires would likely be downgraded and handed off to another USFS team. However, this could easily change, because of the complexity of the fires, the influence of wind and weather. Still, Wakoski said, the aim of Team 3, Wakoski said was “full suppression.” In order to reach full suppression, Wakoski said, Team 3 scrounged, begged and borrowed “stuff” from other firefighting units in the region. This included the additional aircraft, bulldozers and other equipment.

• County Emergency Manager Dustin Tetrault noted that there were no changes in evacuation notices as of Aug. 18. Wakoski said that in the past USFS had let people go back to their homes when a fire wasn’t completely out, and had to evacuate them twice. People were really angry when this occurred, so now USFS insists that things are 100 percent safe before an evacuation is lifted. Tetrault also encouraged homeowners to begin looking at their homes in terms of fire safety. (www.Firewise.org offers many tips to help make this happen.)

• Firefighters also put out two additional fires begun by lightning Aug. 17, Tetrrault said. Without fast action by the Harrison and other fire companies the county would be dealing with two additional fires. Sheriff Roger Thompson called this a fantastic job. One fire torched an acre, the other 75 acres.

• Tetrault also noted that with school starting, emergency space would be moved to the Ennis Assembly of God church, and that Red Cross would be on standby if additional help was needed.

• County Commissioner Jim Hart complimented those affected by the fire on their forbearance.

• Looking ahead, as of Aug. 18, USFS information said that favorable cooler, damper weather was helping.