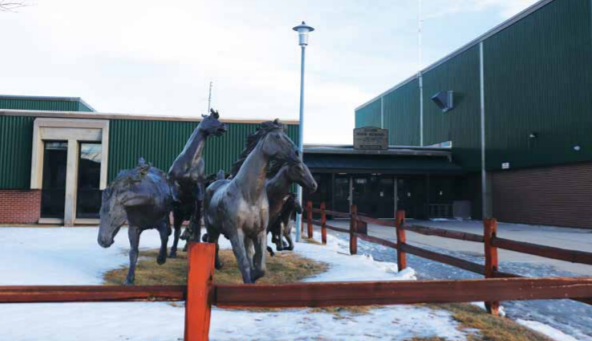 The district encompasses not only the immediate Ennis area, but also the Madison County portion of Big Sky which includes 441 voters, many of them coming from the luxury resort communities of Moonlight Basin, Spanish Peaks Club and Yellowstone Club.

The project recently caught the attention of the Big Sky School District’ school board, who made the trip to Ennis on the evening of Jan. 5 for a tour of the Ennis school facilities followed by discussion between the boards and community members.

BSSD Board Chair Loren Bough initiated the dialogue, highlighting his district’s experience with successful bond requests and building construction. Bough also highlighted the importance of budgeting and considering how a project will affect the greater community.

According to Bough, approximately 25 ESD students attend Big Sky’s schools, since a mountain range and private road hinder the only timely access to Ennis. However, property taxes from those families still funnel to Ennis School District.

Some of those Big Sky voters grappling with the disconnect between tax dollars and school districts reached out to the BSSD school board with their concerns, launching the request for the two school boards to meet.

BSSD School Board trustee Stacie Ossorio described some of those concerns in an interview following the joint meeting,

“Big Sky members of the community are going to be impacted by this,” said Ossorio. “They’re not asking for anything, they’re not getting anything, and they don’t have any voice or control in the process.”

The biggest takeaway from the meeting, said Ossorio, is the hope that Ennis has an adequate budget in place and can raise the funds needed to complete the project.

“Typically, it’s hard to do and you fall short, and then you’re going back to the well,” Ossorio said. “How many times can you keep going back to the well, knocking on the door of Big Sky and saying, ‘Please support another bond issue, sorry your real estate taxes are going to go up, but we need a couple million dollars.”

Ultimately, Ossorio and the BSSD trustees recognize they can’t stop Ennis from moving forward with the bond request, “But,” she said, “The best thing for Big Sky is to hope they do it well, do it right, and within the budget so they aren’t coming back to the well and making people upset.”

Ennis School District Superintendent Casey Klasna felt that the joint school board meeting of the minds was a beneficial one, describing the boards’ tour of the school facility where he pointed out deficiencies ranging from lack of fire suppression in the high school, to the music room in the elementary, which he described as a makeshift “classroom” sectioned off the cafeteria.

In a recap of the discussion between the Ennis and Big Sky school board Klasna highlighted the desire from both parties for collaboration. A standing committee between both boards was discussed as well as a tour for the Ennis trustees of Big Sky’s Madison County private communities.

“It was a very good conversation, and a chance to get to meet each other,” Klasna said of the joint meeting of the minds. “We have a lot in common.” As for the unique situation in which the large tax base coming from luxury homes in Big Sky could be used for ESD, Klasna said both boards know it’s a scenario that’s existed since county and school district boundaries were created long ago.

“I get it, but at the end of the day, I think both communities support education,” said Klasna. “The folks in our district that reside over there benefit from going to the Big Sky district, it’s a very nice, modern school and competitive academically.”

In response to concerns his district is asking for too much or overbuilding, Klasna noted that the bond request is 16% of what is allowed. “It’s really accommodating what our growth is going to be,” he said, noting things like a pool or an auditorium were not included in the plan. “We could have asked for a lot more, but we don’t want to. We want to be responsible.”

Klasna also recognizes there are plenty of residents on the Ennis and Virginia City side of the district that don’t support the bond request.

“I hope that people look at this as the end result is bettering the education system for kids,” said Klasna. “That’s our approach and that’s why we’re doing this.

The ESD will hold an open house at the high school lobby on Jan. 22 from 1 p.m. to 3 p.m. with all shareholders invited to familiarize themselves with the facility.

Work is now underway at the Madison County’s election office to send out a total of 3,554 Ennis School Bond ballots to those residing within the boundaries of the Ennis and Virginia City School Districts.

The ballots, to be sent Jan. 19, should arrive by Jan. 24th or 25th. According to Madison County Clerk & Recorder Paula McKenzie, if you are expecting a ballot and do not receive one, you could be one of the 144 registered but inactive voters eligible to vote once they’re reactivated as a voter in the county.

Need to register? Close of voter registration is Jan. 10, but starting Jan. 11 the Clerk & Recorders Office is open for late registration during regular office hours until Monday, Feb. 7 at noon.

Ballots can be mailed in or dropped off at the Madison County Clerk & Recorder’s Office in Virginia City which will serve as the only polling place. Office hours on election day, Feb. 8, are from 7 a.m. to 8 p.m. Leading to election day the office is open the usual hours of Monday through Friday, 8 a.m. to 5 p.m.

The project would allow the necessary space to accommodate current and projected growth with a new junior high and high school building with adequate square footage and natural light.

This project will result in a facility being ADA accessible. It also includes fire suppression, improved acoustics, and will bring the facility up to current safety code.

In addition, the project will improve site safety and security, make necessary improvements to parking lots, improvements to drop off and pick up of students, and keep all students and staff under one roof.

The school's new design would allow for shared elective spaces to be in a convenient and efficient location for all students. Improvements would also be made to the 50-acre site with a new all-weather track, multi use basketball and pickleball courts, and restroom facility to allow more public use.

Rather than build a new high school, the district did consider renovating the current high school to bring it completely up to code. That renovation cost was estimated at around $25 million and would add no additional space to accommodate current and future growth. It also would not address several site safety concerns.

In looking at the cost of the project and the school district's taxable valuation, tax impacts are much lower than most school districts. The district feels that it is building responsibly and not overbuilding.

Marzullo stated that it is important to know that, when looking at the district bonding capacity, this bond is approximately 16% of the maximum bonding capacity allowed.

“This project will enhance the quality of education and educational services as well as a positive and safe learning environment for students," said Marzullo, who noted that it’s understood that there will be opposition to this project regardless of where folks live in the district.

“Being open and transparent to our taxpayers is vital, which the district has been transparent through the entire process,” Marzullo continued, highlighting the district’s offers and encouragement to voters to contact the school with questions, comments, and concerns.

Project information is available on the school website, in mailers sent to shareholders, and throughout the community.

“We understand that establishing trust amongst our taxpayers is vital in establishing a good relationship regardless of where they live in the school district,” said Marzullo. “We hope that our transparency can give the voters a sense of trust and the information to cast an informed vote. Ultimately, the decision to move forward with this project lies with the voters.”

● Registered but inactive voters from both districts: 144