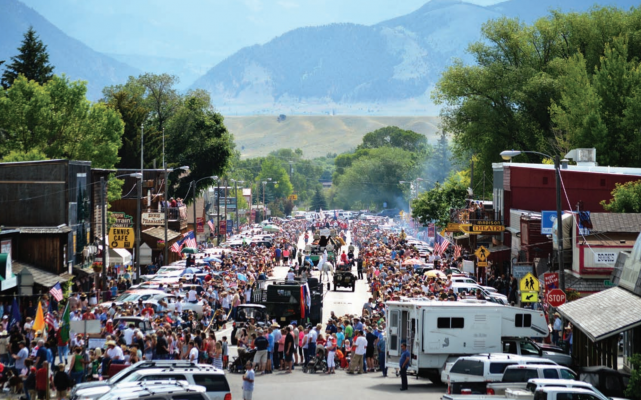 RESPONSE TO THE CORONAVIRUS PANDEMIC

Wed, 06/17/2020 - 9:04am
By
Hannah Kearse
news@madisoniannews.com
“I applaud you taking your stance,” Ennis Chamber of Commerce executive director Marshall Bettendorf said. “Thank you for making a decision. I think it’s positive for the town to move forward.”

Ennis Mayor Blake Leavitt will not sign the permit for the Fourth of July Parade.

The coronavirus pandemic created many obstacles for the parade, which attracts thousands of people to Main Street Ennis every year. The Ennis Chamber of Commerce pitched its plan for a safer parade to the Ennis Town Council June 11. But some perceived managing Ennis’ largest and historically rowdy crowd as unrealistic. The inability to enforce social distancing and the lack of accountability for incomers outweighed the event’s economic boom for Ennis.

“This is the hardest thing I’ve had to deal with,” Leavitt said. “The whole COVID thing was cake compared to this.”

As mayor, Leavitt has the executive power to approve or deny most permits in Ennis. He did not need the town commissioners’ votes to deny the 2020 permit for the Fourth of July Parade. Some parade sponsors had backed out of the parade before the town council meeting. The Woman’s Club declined the Grand Marshal position, 3Rivers Communications declined to be the honoree, and Madison Valley Bank’s Peter T’s Park along with several Main Street businesses would have closed if the parade proceeded.

“I applaud you taking your stance,” ECC executive director Marshall Bettendorf said. “Thank you for making a decision. I think it’s positive for the town to move forward.”

According to the governor’s directives for the second phase of reopening Montana’s economy, “groups larger than 50 people should be canceled unless physical distancing can be maintained.” The directive adds that plans for an event with more than 50 people should be consulted with local public health offices to implement adequate social distancing. The Madison County Public Health Board postponed its decision on Ennis’ Fourth of July Parade to June 16.

“They [the ECC] have to plan, and the health board kicked the can down the road,” Leavitt said. “I’m a little disappointed in the health board. This wasn’t a decision that was supposed to be on us.”

Main Street Ennis bursts with thousands of spectators each year on Independence Day. Many local businesses have their most lucrative days around the event. Residents line the parade procession in truck beds and camping chairs. People cheer on family members and friends walking in the parade. American flags wave among the old cars and horse drawn wagons cruising down Main Street. Ennis transforms into a populated spectacle as thousands pour into the community to experience its creation.

“I support the decision of the town,” Madison County Public Health Nurse Melissa Brummel said. “I have not received any plans that adequately included plans for social distancing.”

Madison County and all but one neighboring county had zero active COVID-19 cases, with 7 cases currently in Gallatin County as of June 16. Rural communities with low COVID-19 cases have may have an advantage in the pandemic because of their low population density and geography.

Population density is one variable for high COVID-19 infection rates, not the only reason for rapid spread in populations, according to the Centers for Disease Control and Prevention data. But the potential for the virus to spread increases as people’s movement increases.

“What I hear is residents wanting things to get back to normal,” Ennis Town Commissioner Lisa Roberts said. “What normal looks like to me is our kids going back to in person teaching and our manor and hospital to be open and able to have visitors.”

“I don’t want to alienate people who have been a part of this for years and years,” Leavitt said. “I just don’t think it’s fair.”

The ECC said that it will optimize on future events that bring sales to local businesses, including next year’s Fourth of July celebration.