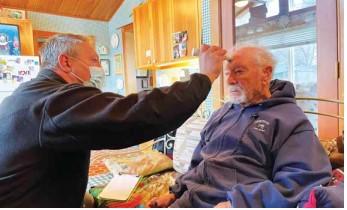 Emergency responders are making house calls, who will pay for it?

Kensinger sat with his walker near the kitchen table as Siders took readings for heart rate and blood pressure.

“Sometimes in the morning, it starts to hurt; the whole leg. My left foot is swollen,” Kesninger tells the medic.

Some Montana emergency responders, like those in the Madison Valley, are trying something new. Instead of only responding to 911 calls, they are working with patients in their homes to prevent unnecessary medical emergencies.

According to the Montana Department of Public Health and Humans Services, there are 10 emergency medical service agencies across the state doing this work as part of a pilot program established by the 2019 Legislature.

The state received federal funding to help set up a training program at Missoula College that could offer its first class later this year. DPHHS also plans to use a separate $5 million dollar federal grant to expand community paramedicine services in Montana.

Nicole Steeneken, who works in the state health department’s EMS and trauma section, says the new federal grant will train nearly 50 first responders around the state in community paramedicine services. The grant will also pay for those emergency responders’ salaries for a year and half.

“We’re trying to hit at least two providers within each county and then build upon that with larger organizations that might fill in the gaps,” Steeneken said.

Nearly 30 EMS agencies in Montana have submitted applications to take part in the program.

While local ambulance providers are happy with the investment in community paramedicine jobs, it’s unclear how they will pay for this program, or its workforce, in the long-term.

“Funding is always going to be the bane of these type of programs,” St. Peter’s Health EMS Manager David Webster said. St. Peter’s has provided community paramedicine services in Helena for two years, while operating it at a financial loss.

While these programs can cut down on unnecessary medical costs, Webster told Montana Public Radio that St. Peter’s program doesn’t pay for itself.

“St. Peter’s has stepped up to the plate. They have taken on the responsibility of subsidizing this program because it’s the right thing to do,” Webster said.

Janet Coffman, a professor of health policy at the University of California San Francisco, found in a 2019 study that 12 out of roughly 30 states with community paramedicine programs had convinced insurance providers to reimburse EMS agencies for the work.

According to Coffman, part of the reason insurers aren’t covering the costs of this work is a lack of data demonstrating its value.

“The peer-reviewed literature on this is not as robust as one would hope that it would be given how widespread community paramedicine is,” Coffman said.

The Montana health department is collecting data on the cost benefit of community paramedicine programs with hopes of convincing health coverage providers to reimburse EMS agencies.

The available data in other states are mixed.

“No matter how good of care you get, if you’ve got congestive heart failure or COPD, at some point you’re going to get sick enough you’re back in the hospital,” Coffman said.

Coffman says community paramedicine programs aren’t a silver bullet to eliminate every unnecessary ER visit or hospital readmission, but they can be worth the cost.

Madison Valley Medical Center Doctor Maura Davenport has seen the value of this work. One of her patients in Ennis frequently wound up in the local emergency room worried about her blood pressure. Now, local EMT Corey Siders regularly checks in.

“Just through a couple of visits, he was able to not only reassure her that she was doing well and was managing her hypertension appropriately, but we also avoided thousands of dollars in ER costs and clinic costs, which was fantastic,” Davenport said.

For patients like Robert Kensinger, regular check-ins by local EMTs help him stay independent and out of a nursing home.

“There’s a possibility I’d have to be in the home up on the hill. I don’t want to do that,” Kensinger said.

This story comes via a partnership with Montana Public Radio, a non-profit newsroom covering the state of Montana.