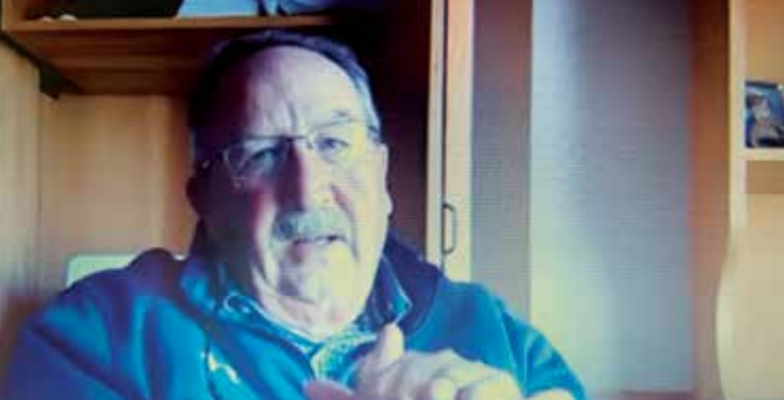 Representative Ken Walsh looks back at his freshman legislative session

Five days after the close of the 2021 legislative session republican HD 71 Representative Ken Walsh met with a handful of his constituents to reflect on the whirlwind experience.

Walsh began the video call with the numbers: 700 bills were introduced in the House, 408 of which passed and 352 passed the Senate. The Senate had 406 bills introduced, 284 passed and 241 passed the House. More than 1,300 resolutions were introduced – Walsh learned that this is about par for the course, with just under 2,000 votes on the house floor over 80 days.

“It’s a lot of bills, a lot of votes, a lot of paper,” recalled Walsh, describing his seatmate’s stack of documents which may well have been four feet high.

Diving into the process was an experience Walsh said was akin to drinking from a fire hose. “Even towards the end, it’s that way,” he said. “Even when you have an understanding of what’s going to happen, a lot of things happen at the very end that you don’t expect.” He said he was fortunate to have mentors who helped him along the way.

Walsh was assigned to three committees: state administration and veterans’ affairs, natural resources, and agriculture. Bills are introduced, assigned to committees which have hearings, and then vote the bills out or table them. Tabling usually kills the bill, said Walsh, but they can still be resurrected.

From there, the bill goes to the house floor for second and third readings, and if they pass, they’re on to the Senate where the process starts all over again.

“Good bills get amended to maybe not so good bills, and bad bills get amended to bills that are good,” said Walsh, highlighting the importance of input from constituents in the process, and noting his mistake in taking issue or supporting a bill from the start. Rather, he learned to monitor the oft-changing drafts before the vote.

Meeting moderator Lauri Bartoletti mentioned several of the hot button bills that made headlines, from abortion to transgender rights and allowing guns at universities. What was Walsh’s reaction to how those bills were handled?

Votes focused on social issues were the tough ones, said Walsh. “I think the reason all those hit was because you had a Republican governor,” he said. It had been 16 years with a Democratic governor prior to Governor Gianforte taking office. “To be candid, if you had a Democratic governor a lot of those probably would have been vetoed. It opened up an opportunity for what I call the right wing of our party, and all those bills came. A lot of them got killed, but not enough in my opinion.”

Walsh said the original bill to allow for permit-less concealed carrying of guns on campuses and other locales was a bad bill, but it went to the Senate and was amended substantially to what Walsh thought was a better option than what was first proposed.

“It’s going to be on college campuses, which carrying guns is probably not the right thing, but it’s going to happen,” said Walsh, noting neighboring states allow guns on campus and have not had any issues. “How many will participate that way? Who knows? But I think they’ll have decent safeguards which they amended into the bill.”

When it comes to the economy, Walsh said that the biggest boost coming to Montana will be the just under $3 billion coming from the American Rescue Plan Act to be spent on water and sewer projects, education and broadband. “If we can find people to work,” he said. “I mean, you can’t find them right now, so I don’t know where those come from.”

Meeting attendee Rand Bradley wanted to know more about HB-259, signed by the governor, which prevents local government from having inclusionary zoning. Bradley noted it was poorly received by Bozeman, and he was sad to see it was favored by the governor and Republicans. “Why would we want to prevent having some affordable housing?” asked Bradley.

Walsh said that bill was about tackling cost shifting – previously someone who built a condo complex was required to build a set number of affordable housing units. It still costs the same amount of money to build the affordable units as it does for the rest, explained Walsh, so the others had to be priced higher to make up for the contractor cost. “You weren’t really creating affordable housing, you were just raising the prices of the other houses,” said Walsh.

Property tax credits for elderly homeowners making less than $45,000 was also recently approved by the governor. “That, in my opinion is the more serious problem,” said Walsh. “If you live in Bozeman for example, have lived there for 40 years and have a modest home, those values keep going up, property taxes keep going up. It’s hard for a young person to get into a home, but it’s even harder for an older person to stay in a home.”

Still catching his breath from the last session, Walsh said he’s signed up and committed to two years of service. “I just want to visit with people, just like this,” he said, highlighting the need to get more folks involved in the lawmaking process. “Understanding, and hopefully being able to explain to the public how important it is to participate and be involved.”

Lawmaking is a quick process, said Walsh, and a lot gets done in a short time. The first two months of this year’s session were quiet ones, with no lobbyists or others allowed, but Walsh said he was glad to see them return. “Good lobbyists are important,” he said. “Once they got back involved it helped me a lot.”

Visiting with constituents is also important to Walsh. He said he appreciates every phone call and email he receives, “Well, most of them, some of them can be pretty mean,” he said with a grin, continuing, “People might not agree with what I say or how I vote, but I try to be honest and have a reason why I do it.”

The discussion was spearheaded by the Rotary Club of Twin Bridges/Ruby Valley. The initial plan was to hold the meeting at mid-term of the session but Walsh’s mother passed away and the meeting was rescheduled. Walsh said he looks forward to offering more opportunities like this in the future.