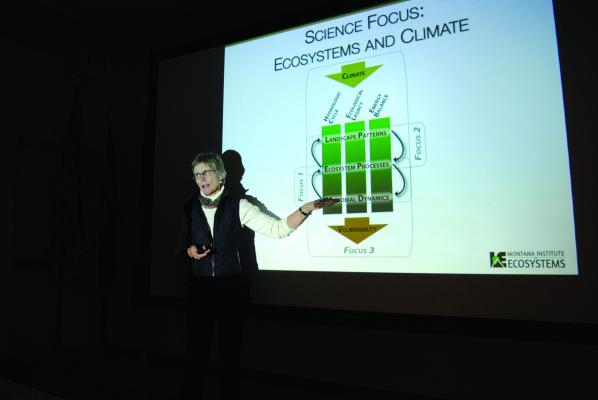 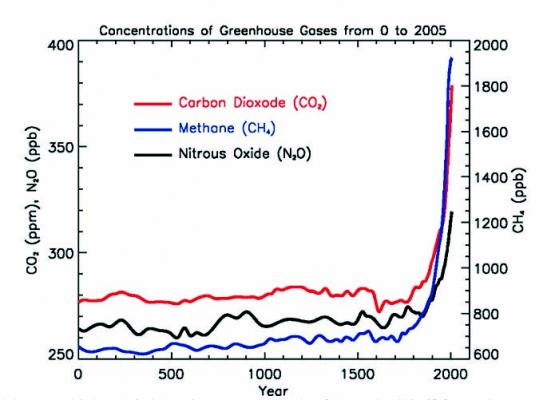 ENNIS - About 60 people crammed into the Madison Valley – Ennis fire station north of town on Wednesday evening, November 28, to participate in what the Gravelly Landscape Collaborative (GLC) was calling a “Community Climate Conversation.”

GLC – along with the Madison Valley Ranchlands Group, the Ruby Watershed Council, the Mule Deer Foundation’s Ghosts of the Madison chapter, the Madison Conservation District and the Madison River Foundation – had invited Dr. Cathy Whitlock, a professor of Earth Sciences at Montana State University (MSU), and a fellow with the Montana Institute on Ecosystems, to talk about her findings on how climate change is impacting Montana.

After a social time and a pizza dinner – it quickly ran out – GLC’s Jennifer Boyer introduced Whitlock, noting Whitlock had recently become a member of the National Academy of Sciences, and the first Montana scientist to join this august organization, a high honor. Whitlock, Boyer also noted, has spent the last 40 years studying the environmental history of the Greater Yellowstone ecosystem as well as comparable large landscapes in New Zealand, Tasmania, and Patagonia.

Whitlock’s special focus is long-term climate and ecological change. In this field, she has authored more than 200 publications and trained more than 40 graduate students.

More important to the talk, Whitlock was the lead author of the 2017 Montana Climate Assessment.

As Whitlock dimmed the lights and launched her presentation, she explained why she was in Ennis to talk climate.

Whitlock said she is a paleo-climatologist: a scientist who looks at climate across those centuries and millennia, using lake bottom core  sediment samples, tree rings, pollen, bones and other measurable monitors that can track climate. Lake bottom sediment cores, for example, can reveal the chemistry of the air, water, soil and anything that went into the lake – like pollen – over time. Tree rings can reveal drought, growth and other information. Pollens tell what plant life was there, which says a lot about the climate.

Whitlock and her students might spend several hours collecting the raw materials for climate analysis in beautiful places, she said, then take three years analyzing this data in the lab at MSU.

• During the last 115 years, Whitlock said, there has been a definite warming trend in Montana.  She showed a chart that compared temperature trends across the last 1,700 years. For most of that period, temperatures rose and fell in a pattern that was fairly regular. However, between 1918 and 2017, there was a 1.5 degree Fahrenheit (F) temperature increase, with 2013-2017 being the warmest five years on record, and 2017-2018 featuring climate-related disasters such as huge forest fires, deepening drought.

• Annual average temperatures, including daily minimums, maximums, and averages, have risen across the state between 1950 and 2015. The increases range between 2.0 - 3.0°F during this period.

• Winter and spring in Montana have experienced the most warming. Average temperatures during these seasons have risen by 3.9°F (2.2°C) between 1950 and 2015.

All of these things, and the science from other studies across the globe, indicate that climate change is, indeed, taking place.

However, as the Montana assessment points out, since the Industrial Revolution, global climate has changed faster than at any other time in Earth’s history. Whitlock called the rate of change “unprecedented.”

The rapid rate of change is the result of change in atmospheric chemistry, specifically the increase of greenhouse gases: carbon dioxide (CO2), methane (CH4), nitrous oxide (N2O), water vapor (H2O), and ozone (O3). This has been attributed to increased fossil fuel use, land-use changes such as deforestation and fertilizer production.

Whitlock talked about how ice cores from the Antarctic show CO2 levels across the last 800,000 years  have risen from 200 parts per million (ppm) during the Ice Ages to 280 million ppm during the warmer periods between ice ages. In 2013, CO2 levels hit 410 ppm for the first time in history. Whitlock linked this astounding jump in CO2 levels with fossil-fuel burning.

There is a relationship between temperature and CO2 levels, Whitlock said.

The last time the Earth’s atmosphere had CO2 levels this high was during the Pleistocene Epoch, when mammoths, sabre-toothed tigers, American camels, American lions, horses, short-faced bears and the like roamed the Earth. Pleistocene temperatures were 5.5. - 7.5 degrees warmer, 18 degrees warmer at the poles, there were no ice caps, and the sea levels were 82 feet above today’s mark.

At that time, Whitlock said, Montana’s climate was more like South Carolina’s: hot, humid, muggy, with the vegetation that goes along with this.

Whitlock pointed out that the Intergovernmental Panel on Climate Change (IPCC) predicts that by 2050, the Earth will experience a rise in global temperature of 1.5 degrees – a conservative guess of what will happen with rising CO2 levels. This would result in the death of all coral reefs in the oceans, more coastal flooding, and other impacts, which will have rebounding impacts on any number of things. If we continue along the same path, global temperatures could rise more than 8 degrees.

Reviewing 11,000 years of change in North American pollen records, Whitlock said, 2016 was 99.4 percent warmer than all of those years, a harbinger of things to come.

According to the state climate assessment, Montana is projected to continue warming across all seasons, and under all CO2 scenarios throughout the 21st century.

Since 1950, temperatures have warmed .42 degrees in Montana, while the U.S. average is .26 degress, Whitlock said.

By mid century, Montana temperatures are projected to rise by about 4.5 - 6.0°F depending on which scenario is considered: If the world can reduce fossil fuel emissions and hold to IPCC’s goal of  “only” a 1.5 degree warming, the lesser amount might apply. If we continue to do nothing, the higher amount applies.

All the models agree, Whitlock said, it will get warmer.

These state-level changes are larger than the average changes projected globally and nationally due to the fact that Montana is not located near an ocean, which could help moderate temperatures somewhat, Whitlock said.

The number of days in a year when daily temperature exceeds 90°F and the number of frost-free days are expected to increase across the state.

Across the state, precipitation is projected to increase in winter, spring, and fall; decrease in summer.

These changes will impact water, forest and agriculture:

Water - No getting around it, water is life.

Since the 1930s Montana’s mountain snowpack has declined. This has been most pronounced since the 1980s. Warming temperatures through 2100, especially during spring, are likely to reduce, possibly alleviate mid- and low-elevation snowpack, make snowmelt come earlier, and result in an earlier peak in spring runoff, Whitlock said. This will reduce the amount of water available in later summer, especially in snowmelt driven watersheds.

Total annual streamflows are projected to increase slightly for most state rivers, but the magnitude of change varies.

Changes to groundwater resources will depend on the response of individual aquifers to warming. Still, the assessment says demand for groundwater is likely to increase as warmer weather dries up stock ponds or irrigation canals can’t deliver enough water in a timely manner. The amount of water available for irrigation, for example, could buffer some climate-driven changes, unless demand exceeds surface water supplies.

“Mega- droughts,” Whitlock said, will continue as a natural feature of Montana’s climate, but rising temperatures are likely to exacerbate these droughts, which will likely occur during the late summer and early fall. She pointed to climate records showing such droughts in 936 1054, and 1150 A.D. Also, 2017’s drought was a “flash drought” with a warm, wet spring followed by the precipitation simply getting turned off. Whitlock expected there to be more of these events, larger fires, and more crop damage in the future.

Forests - Warming can have positive or negative effects on forests, depending on the location and conditions. However, the impact of extreme heat will not be good for trees, and the response of forests to warming is likely to be complex.

The effects of warming will be driven by temperature in energy-limited forests and moisture in water-limited forests. Also, the speed and magnitude of climate change is likely to outpace any gains in forest growth, resulting in a net loss of forests.

This will impact the U.S. Forest Service, which controls 59 percent of Montana’s forested lands, the most Whitlock said.

Finally, since forest store carbon, their reduction could hasten rising CO2 levels, a multiplying effect on both CO2 and temperatures.

Agriculture - Since multiple drivers – seed costs, market demands, machinery, growing seasons, etc. – steer agriculture, things get complex here. Climate is just one element of this, but the assessment says it will become more important as warming continues into the 21st century. Every component of agriculture—from prices to plant pollinators and crop pests—has complex relationships to climate.

Adaptability has always been a hallmark of Montana ag producers, and the assessment says this should continue. Diversified cropping systems, including rotation with pulse crops and innovations in tillage and cover-cropping, along with measures to improve soil health, will help adapt to climate change.  Some warming may actually be good for crops and forage in in the short term, but the impact of warming will become increasingly problematic as time continues.

Also, how climate change affects global commodity prices will have a big impact: Small grain markets, for example, are globally driven, where non-commodity crops tend to rely on local or specialized non-local markets.

For cattle and sheep, the models predict native plains vegetation will increase but livestock forage quality will decrease. Rising temperatures will allow annual winter weeds like cheatgrass to gain a bigger foothold. This will decrease crop yields and forage productivity, and increase range wildfires.

Crop diseases and pests are projected to increase. Warmer temperatures and more winter wheat could result in more crop pests, like the wheat stem sawfly, with natural regulation of this pest by native parasitoids declining.

A warming climate has far-reaching consequences, the assessment says. So climate change – whether you believe it to be man-made or part of a natural cycle – is here. What are the anticipated impacts? Are there any opportunities that might result from this?

Nationally, climate change is anticipated to cost billions of dollars – as much as 10 percent of the U.S. gross national product – by 2100, Whitlock said. Some of the costs involved would be the results of storm damage, heat waves, drought, flooding, fires and other extreme forms of weather.

Yet at the same time more frost-free days and longer growing seasons could enable greater crop diversity. She talked about how some ag producers were now growing cantaloupe – really good Montana cantaloupe, she joked – instead of traditional crops, and how commercial timber companies were already planting larch, which do better in warmer climates, than Montana’s current conifers.

Still, more 90°F-plus days in a warming climate will stress crops and up water demand for most crops; limit grain development from pollination to seed and  elevate heat stress on livestock.

Whitlock said she would like to see the assessment expanded into more localized regions – a drilling down of the data, as she described it, to the watershed level – so conservationists, planners and others can start getting a handle on dealing with the impacts of climate change.