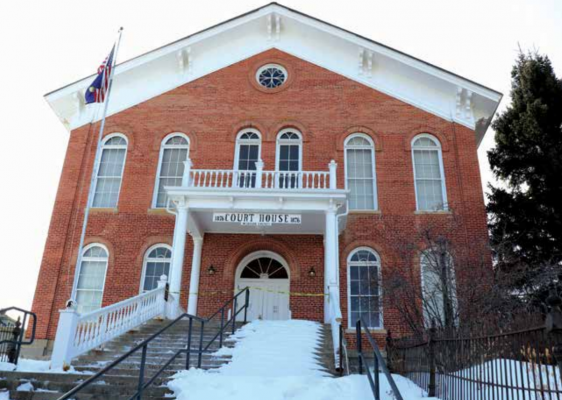 Can you smell that smell?

On Mondays, Madison County GIS Tech Analyst Tommy Luksha has no problem getting things accomplished at his office in the Madison County Courthouse. By Tuesday, he’s able to remain productive, but by Wednesday, the effects of what he suspects to be mold exposure take their toll. Things continue downhill each week from there, and by Friday, Luksha’s symptoms render him unable to remain productive at his job. Weekends are then spent recovering.

Luksha described this predicament to the Madison County Board of Commissioners at their weekly meeting on March 9, laying out a scenario where an unexplained illness, presenting as a sinus infection, has plagued him. Medical diagnosis, he said, points to an environmental issue at the courthouse.

“I honestly don’t know how long I am going to keep working with what I am suffering through,” Luksha, who is immunocompromised, told the commissioners. By Friday, “I basically just want to crawl in bed and try to get the headache to go away.”

Historical research on the courthouse mold contamination was provided by Luksha to the commissioners, detailing county discussions about the possible mold issue beginning in 2010. While visible mold was not identified in 2019, the sheriff’s office was relocated from the courthouse in August of that year and prisoners were not allowed to be housed there prior to that.

In February 2020 Buffalo Restoration performed two air quality tests at the courthouse, confirming the presence of mold. That summer air purifiers were placed in offices as an interim solution and a plan to install gutters as a way to address water seepage was put in place. As of March 2021 the gutters had not been installed.

After laying out his situation, which began when he started working in the building in 2016, Luksha requested that the commissioners approve another round of environmental testing at the courthouse, as well as to agree to provide a safe working environment for courthouse employees by July of this year.

Public discussion ensued before any decisions were made by the commission. Luksha isn’t the only courthouse employee who is experiencing respiratory symptoms. At least seven other attendees at the meeting described similar scenarios of sinus suffering, most experiencing post-nasal drip and other allergy-related ailments.

Madison County Judge Suzanne Nellen said “everyone” is being affected in the justice court office, with medical issues, absences and allergies commonplace. Some of those medical issues were confirmed as directly related to mold, she said.

“If there’s mold in the building, it’s got to be eradicated,” Nellen demanded, imploring the commissioners to take action. “It’s a liability… it’s apparent that there is more than a probability that there’s some connection between whatever the condition is in the building to the wellness and the health of at least the justice court employees.”

Nellen continued, “I don’t like this minimizing health of individuals… avoiding it or not addressing it, it is a problem and we have to deal with it, otherwise, the next thing is, I’m not going to have anyone to work in my office because they’re sick, they get sick, and they leave.”

If mold is found at the courthouse, Luksha requested that it be removed. Madison County Sanitarian Van Puckett explained that the only regulation requirement for the public building would be to clean up any visible mold – spores found inside walls or other non-visible places would not apply. In addition, an employee would need to prove the specific mold found in the building was what they’re allergic to.

“Adverse health effects are subjective to each person,” said Puckett, nothing that there are something along the lines of 400,000 mold species. “If you are having health issues then you need to get diagnosed.”

Puckett said he did not think eradicating the mold would be either feasible or even possible. “You are talking about tearing the building down, tearing all the walls out,” he said.

That state standard described by Puckett wasn’t enough for Nellen. “The other standard is what’s right for the building and the people that work there and the public,” she said.

Following the hour-long discussion, Luksha’s request to perform another environmental test was approved. Buffalo Restoration performed the testing that week, and as of March 15 results were pending. The commission also approved more frequent testing moving forward.