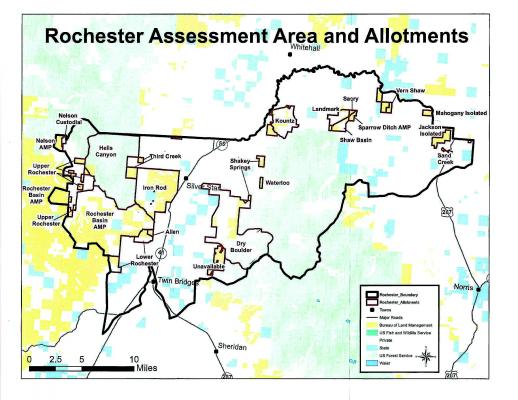 HARRISON - Last week and earlier into this week, the Dillon Field office of the U.S. Department of the Interior’s Bureau of Land Management (BLM) completed an “interdisciplinary assessment” of the Rochester watershed. The assessment will offer what is essentially a report card on the health of more than 32,600 acres of public land parcels, including 21 grazing allotments and more than 3,000 acres of unalloted BLM land.

According to Dillon district BLM Assistant Field Manager of Remediation, Patricia Fosse, the assessment is part of a much larger effort to look at land health across 16 watersheds in the district. This is done on a landscape scale, she said.

All BLM lands that fall into these different watersheds are re-evaluated every 10 years on what BLM calls an “adaptive management schedule.”

BLM has been doing this since 2002, she said, and this was the result of 1995 federal BLM regulations changes that obligated BLM to meet certain rangeland management criteria - criteria established by the Western Montana Resource Advisory Council.

“We use their criteria to assess streams, uplands and other habitat, to make sure these are functioning properly,” Fosse said.

The five criteria the advisory council wants BLM to look at are:

During year one of the process, data on all five of the criteria is collected.

In the Rochester watershed, year one was 2017. BLM had people out in the field last year, collecting information on water quality, forest health, the sage-steppe uplands and range areas. As a means of comparison, Fosse said, some areas under BLM management have data that has been collected for the last 50 years; in some cases, it’s 10 years.

During year two, when the actual two to three weeks of physical assessment is being done – June 11 – 25 in the Rochester watershed this year – the “interdisciplinary team” gets out in the field and actually looks at each assessment first-hand. Fosse said the assessments are not a desk-bound review of year-one information, but the team is out in the field, reviewing the ground first hand. The interdisciplinary teams who compile the assessments are specialists in streams, forests, uplands, roads, all of the five criteria.

“We use good science,” Fosse said, “and the public can come along.”

When the field assessment is completed, the information is compiled and a watershed environmental assessment (EA) report is prepared and shared with permittees like ranchers who graze cattle on BLM lands, recreationalists, Montana Fish Wildlife and Parks, conservation groups and other interested parties.

Fosse said this is usually in late December. Again, the public is welcome to participate in this, share information.

“We’re keeping up pretty good with the EAs,” Fosse said. “The office is pretty efficient, reassessing the 2008 assessment, looking at what worked and what didn’t. The teams do as much as they can, weather permitting, to cover the 5,000 acres per year.”

Following the environmental assessment (EA) report, when the data collected has been considered and summarized, two things happen, according to BLM.

Following the EA, a “determination of standards” is made by BLM. Think of this as a report card. It considers how well the area being considered – and this could be anything from a watershed to a ditch dug for a culvert within that watershed – meets the standards set by the resource advisory council or doesn’t.

After this, a National Environmental Policy Act (NEPA) document is prepared. This analyzes the alternatives for plans to help the watershed or individual parcel of land meet the standards. All during this process, the public is invited to comment and participate in the compiling of information.

If these areas don’t meet the standards, Fosse said, BLM discusses ways to remediate the problems. For example:

• If a new road was washing sediment and silt into a river, BLM would discuss ways to remediate this problem with Madison County’s commissioners.

• If off-road vehicles (ORV) were causing erosion on a trail, BLM would meet with ORV user groups.

• If natural succession of the land was resulting in western junipers and Douglas fir trees creeping into sage-steppe grasslands, BLM might want to do a prescribed burn. Fosse noted how changes in how people use the land have greatly impacted grasslands. In the past, fire and grazing animals kept grasslands in grassland. With people on the land, and fires being suppressed to keep property from burning up, the natural “fire regime” has changed, and western juniper and Douglas fir trees have come “downslope” and expanded into sage-steppe grasslands and grasslands. This creates more fuel for fires to burn, and it burns differently – more intensely – than grasslands normally do. Aerial photos show juniper and Douglas fir have expanded more than 30 percent into once grassland areas. To fix the problem, BLM does prescribed burns in the springtime, when such burns are safer. Fosse said she has seen lightning sparked fires burn up to areas that have had a prescribed burn on them and peter out, rather than continue to burn. Tree on grasslands or sage-steppe habitat also consume a lot of water – Rocky Mountain junipers will suck 60 gallons of water per day from the surrounding soils.

• In forests, the issue is also too much fuel for fires. In the past, Fosse said, area Douglas fir forests grew straight and tall, with thick bark, and could withstand lightning-sparked grass fires in the understory. With human help and fire suppression, today’s fir forests have a denser understory, full of “cohorts,” younger trees of short and medium height. These trees form a ladder of sorts for fires to reach the crown of mature Douglas firs, and crown fires do far more damage to the forest’s overall health than understory fires. Thinning the forest via timber sales can alleviate this and remove the ladder fuels that kill with crown fires.

• Another forest issue is tree density. The suppression of fire has created forests far more dense than historic forests were. As a result, more competition takes place among the trees for food, water and other resources. This creates stress and makes the trees more susceptible to epidemic insect infestations such as pine bark beetles. Timber sales can thin the forest result in more aspen growth, creating healthier stands of trees.

The recommendations for changes to improve the health of the land are made in a final decision report issued by BLM.

For example, the Belmont allotment is one of 13 grazing allotments in the Middle Ruby River watershed.

In 2013, an interdisciplinary team assessed this allotment for “Upland Health, Riparian Health, Water Quality, Air Quality, and providing for Biodiversity,” according to the final decision report. At that time, Belmont did not meet the riparian or water quality standards, so BLM offered the rancher leasing the Belmont allotment a range of “management alternatives designed to initiate progress towards the standards.”

During the summer of 2014, the Belmont lessee hired a natural resource consultant to develop a comprehensive grazing plan for his entire ranch, including the leased BLM ground.

BLM personnel, members of the interdisciplinary team, the rancher and his consultant visited the Belmont allotment during August and September of 2014 to discuss BLM’s process, specifically why BLM determined that some riparian habitat in the allotment had not met the standard.

In March of 2015, a list of options for how the rancher might meet the standards was created and shared with all parties, including the public — with the public having a 30-day window to comment on these proposals. In June of 2015, BLM issued a preliminary decision on how to accomplish the aims of the standards, and received one protest against this from Bradley Livestock.

In September of 2015, BLM-Dillon finalized its recommendations and sent them to BLM’s Washington, D.C. office as part of larger plans for the region and sage grouse regions.

The Native Ecosystems Council appealed this decision in early November. (According to a 2010 U.S. Government Accountability Office report, the Native Ecosystems Council and the Alliance for the Wild Rockies likes to sue the federal government when environmental issues are involved. These two groups, for example, sued or objected to U.S. Forest Service fuel reduction plans in Region No. 1, which includes Montana, 55 times between 2006 and 2008, more than in any other region. The Alliance was responsible for 42 or these, Native Ecosystems the rest.)

In May of 2016, BLM – Dillon asked BLM’s main office to vacate the final decision to reconsider the plan and reassess the allotment.

As a result, a third assessment for the Belmont allotment was completed and six livestock grazing alternatives were offered. Again, the public had the opportunity to comment, and again three comment letters were received, one from Bradley Livestock, one from Native Ecosystems Council and one from Western Watersheds Project.

BLM again issued a proposed decision with response to the comments, and Native Ecosystems and Western Watersheds protested.

A review of other assessments, large and small reveals that most are not quite so complicated.

In May this year, 3 Rivers Telephone Coop requested two right of ways to install fiber optic cables for “clearer communications and high speed internet and digital television,” along roadways in Granite Creek, Bear Gulch and Alder Creek. No one objected – yet. But BLM still had to oblige NEPA review rules, calling in eight people including a realty specialist, an archeologist, a wildlife biologist, a hydrologist, a rangeland management specialist, a weed coordinator, and two BLM employees because the cable lines went through sage grouse habitat.

Also, in April this year, Barrett Minerals Inc. proposed a “layback within the existing Treasure Mine open pit to access an extension of talc ore” in a 50-year-old pit mine. The proposal backfills an area of BLM administered land that was to be left as a highwall.

The Treasure Mine permit pre-dates BLM’s newer regulations, and the mine’s most recent proposal covered a revised operations plan designed to limit impacts to Stone Creek.

One goal of the 2006 Dillion Resource Management Plan goal is to “Encourage and facilitate development of locatable minerals in a manner to prevent undue and unnecessary or undue degradation,” and the mine’s plans were in conformance with BLM’s 2015 sage grouse rules, so the plan was approved, without protest.